On Friday, April 20, LJISD held different active shooter training courses for 150 teachers and unarmed security guards employed in the school district. The goal of these trainings was to increase safety and awareness for La Joya students. 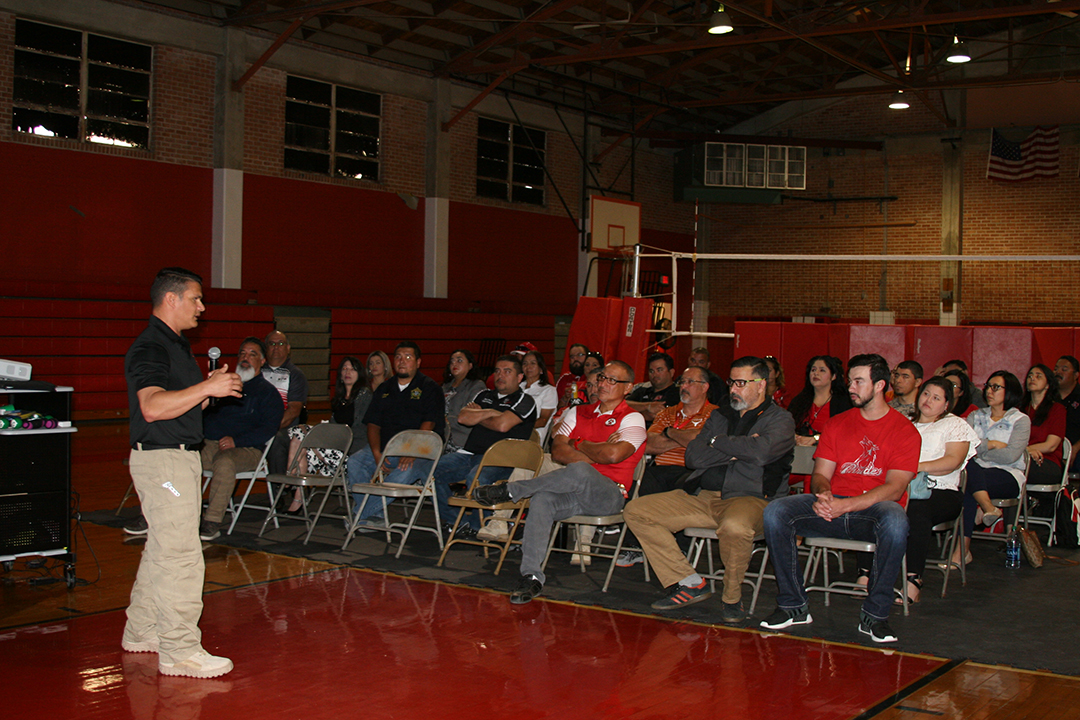 Dr. Armando O’caña, part of La Joya’s Student Services Department, was in charge of bringing the event to staff in the district. He attended the training courses himself, and spoke about the importance and need of these programs.

According to O’caña, the district is going to try and bring these courses to all the teachers at La Joya in the future. He cited the recent shooting at Parkland High School in Florida as a “rude awakening” that motivated them to hold these trainings.

O’caña was happy with the responses from teachers about the course.

“The teachers are responding very positively toward the training,” O’caña said. “At first we kind of predicted that there would be an element of fear, but I think that they can come to the conclusion that it may happen in the classroom.”

He also said that the responsibilities of teachers are now including being first responders in these kinds of situations.

“We’ve always thought about student safety, numero uno,” O’caña said. “But the threats that we had when I was teaching are different from what’s going on now.”
O’caña also spoke about the emergency plan that La Joya has in place in order to keep students and faculty aware and safe.

“It covers four major phases,” O’caña said. “Prevention is the first one, we want to prevent. And if we can’t prevent everything, then we need preparation. And this is part of the preparation phase of our emergency operational plan, that we train our staff.”

The third phase involves a response team that will address these kinds of events, and the fourth is the family/student/parent reunification model. This would, after an active shooter situation, include bringing students and their parents together to unite themselves and return to a “normal operation.”

David Ramirez, an alumni of La Joya High School, was one of the four instructors giving the training, and a co-owner of First Shield Tactical. The group began providing these trainings after the tragedy that occurred at Sandy Hook Elementary School four years ago.

“If you look at the history, it’s been happening since the 1700’s,” Ramirez said. “It’s becoming more and more of a norm now, it’s not going to stop any time soon, so we want to give teachers and administrators a different way of thinking instead of hide and pray for the best; so if they’re able to do something, they can do it.”

First Shield Tactical goes over strategies teachers can implement in an emergency situation, such as situational awareness and defensive tactics, that regular civilians can use.

“We have a lot of instructors come in here that are experts in these fields,” Ramirez said. “We also teach tactical medical techniques that are used in the military and law enforcement now.”

Ramirez said that in situations like these, it takes one to two hours to get medical attention to those who need it. Showing teachers simple medical training techniques, such as applying a tourniquet or simple gauze to prevent blood clots, can save lives.

“We just want to give an all-around awareness and how law enforcement and military have been doing business,” Ramirez said. “Maybe with that, it will minimize casualties, or if not, stop them.”

The district held the three sessions of the 360 Active Shooter Training Course at the La Joya ISD Wellness Gym.

About fifty teachers attended each two-hour session.
Dagoberto Perez, a teacher in La Joya, was one of the 150 teachers given the training.

“The kids are constantly seeing social media, and I have actually heard kids say that they’re very afraid,” Perez said. “I think it’s important for teachers to be trained as much on the subject as possible, not only for their sake, but also to keep the kids calm. The objective of teaching is to teach kids core concepts, not to have them worried about whether or not they’re going to die at school.”