District. Area. Regionals. State. With each passing meet, the competition gets tougher. Three Big 7 programs proved to be the toughest in their area as the Pioneer boys, 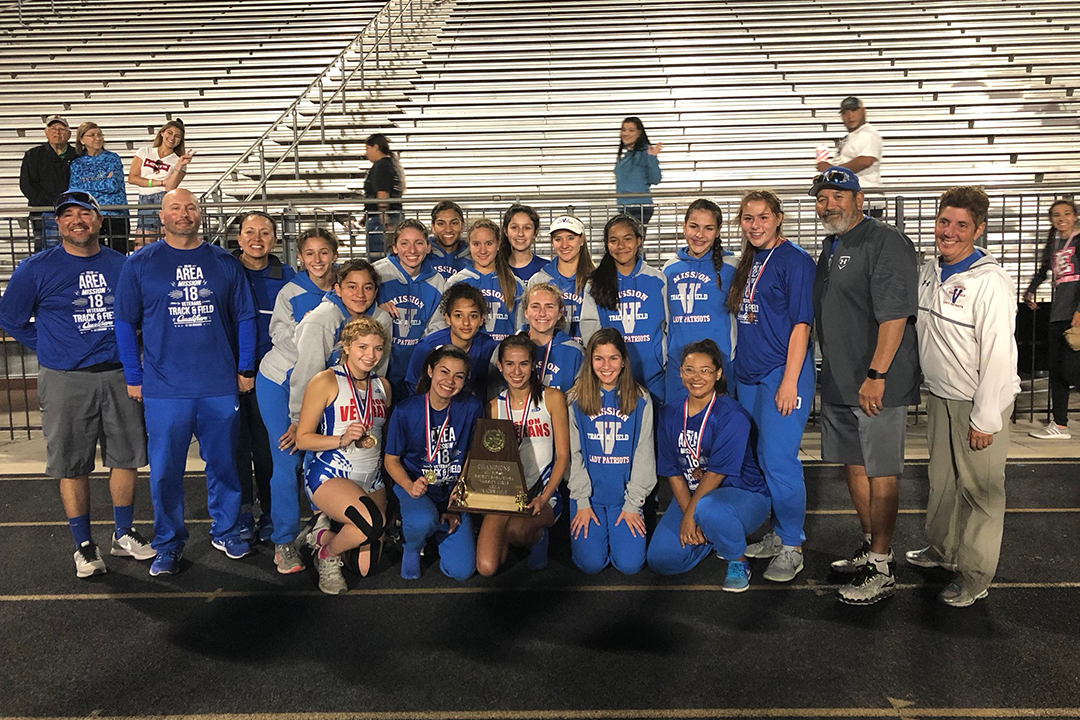 It was a clean sweep in the UIL 5A Area 31/32 Track Meet as the Diamondbacks and Lady Patriots pushed their way to first place team finishes, beating out 16 other programs.

Pioneer Diamondbacks
The Pioneer Diamondbacks scored 101 team points, 13 more than second place Brownsville Veterans Memorial, to pick up their second consecutive area title. Led by gold medal performances in the shot put, high jump and the 4×200 and 4×400 relays, the Diamondbacks are sending six athletes to compete in individual competitions, in addition to all three relay teams.

Senior and University of Houston signee Johnny Howell set an area record with a shot put throw of 57-08 to take first place and also came in third in discuss with a throw of 147-07.

Junior Parker Barrett finished first in high jump with a leap of 6-00.00, and is joined by pole vaulter Roman Garcia, who finished fourth with a height of 12-00.00.

Morales also qualified for regionals in the 800-meter run, Perez in the 200-meter run, and senior Tyler Bulthuis in the 110-meter hurdles.

Other 31-5A athletes who qualified for state on the boys side are Sharyland’s Blake Klein, who took home first place in the triple jump (44-00.75) and fourth place (19-11.25) in the long jump. Rattlers joining Klein at regionals are Ruben Davila and Diego Ortiz who finished first and second in the 110-meter hurdles, Jimmy Esquivel in the pole vault and Will Patterson in the high jump.

Two Patriots will also be making the trip to San Antonio as Landry Gilpin finished second in the long jump (20-04.25) and Leo Cantu finished fourth in the triple jump (42-05.25).

Mission Veterans Memorial Lady Patriots
The Lady Patriots went back-to-back when they were crowned area champions on April 20 after bringing home the same trophy a year ago, but this one was decided by last minute drama.

The stage was set for the final girls race of the day, the 1,600-meter relay. With Edcouch-Elsa holding a slim 84-83 point lead over Mission Veterans, the relay team of Nyla Vela, Alyssa Villarreal, Lizeth Sanchez and Charlize De La Garza came through in clutch with a school and area record-breaking performance of 4:03.31, six seconds better than the Yellow Jackets, securing the crown for the Lady Patriots 103-100.

The Lady Patriots advanced to regionals after qualifying in 12 different events, including seven top four finishes by Vela and De La Garza.

Makenzie Gerlach placed second in the long jump (15-11.25), while Charlee Salinas set a personal record in shot put with a throw of 38-00.00, good enough for third place, Ashley Navarro who finished fourth in discus (117-07), and Alyssa Villarreal placed fourth in the 300-meter hurdles.

On the girls side of the 31/32 Area Meet, Pioneer posted a third place finish with Sharyland right on their heels in fourth. Qualifiers include Pioneer’s Daizy Coronado 400-meter run, Nydia De La Garza and Gabriela Ramirez in the 800-meter run, Ana Hernandez in the 1,600-meter run, Jessica Zarate in the 100-meter and 300-meter hurdles, Daizy Monie in shot put and discus, and the 4×400 relay team.

For the Lady Rattlers, Valeria Diaz finished second in the 1,600-meter and 3,200-meter run, Madison Bickerton in the high jump, Andrea Marcos in pole vault, Diana Perez in triple jump, and the 4×100 and 4×200 relay teams.

Palmview Lady Lobos
The Palmview girls track and field program continued its dominance at the UIL District 29/30 Area meet at La Joya ISD Stadium to score 128 team points on their way to another Area championship.

The Lady Lobos used solid performances from its distance runners and relay teams, with all three relay squads placing in the top two.

The rest of the 30-6A Area qualifiers are:

The Region IV meets for 5A and 6A will be held at San Antonio’s Alamo Stadium this Friday and Saturday.

The State Meet will take place May 11-13 at Mike A. Myers Stadium in Austin.