Two incumbents and a former member of the Mission CISD school board will continue to serve on the Mission school board of trustees after winning in their respective races during election day Saturday, May 5.

Petra B. Ramirez and Herminia “Minnie” Rodgers-who were in the “A+ Team” Slate-will remain in their Place 6 and 7 seats. Both of them beat their opponents, newcomers Xavier Longoria and Lucia Leo-Diaz, with nearly 52 percent of the votes Saturday. 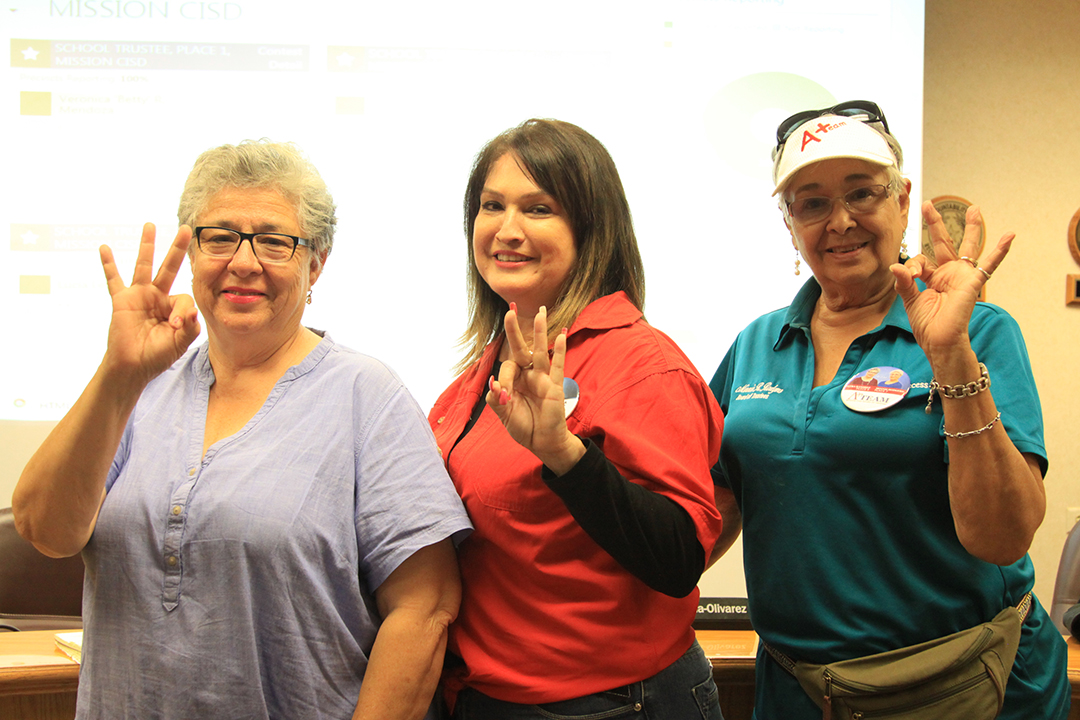 Though she wasn’t an official member of their slate, the duo is joined by Veronica “Betty” Mendoza- a life skills coach who served on the school board in 2014 for two years. She beat her opponent, current school board Vice President Roy Vela, with 53 percent of the votes.

“The community spoke, and they said we have their support,” Rodgers said Saturday.

“We’re all a little surprised and expected better,” Longoria said. “But it is what it is and we have to accept it and move on.”

Rodgers and Ramirez are both former teachers who have a combined 82 years worth of experience in education. Mendoza- who works with students and their parents as part of her job-said this experience will help on the school board.

“That will help us understand our students and what they’re going through to do the best for them,” Mendoza said.

Mendoza became an honorary member of the “A+ Team” slate after Rodgers and Ramirez reached out to her, Mendoza said, adding that they got along well when she used to serve on the board.

“We have the same goals,” Mendoza said. “I know they’re women of integrity with no hidden agenda, they were here to serve the community. They are honest and transparent and I knew I had to join them.”

The trio agreed that the school board’s top priorities are focusing on the district’s curriculum to ensure their students don’t fall through the cracks, and find a suitable replacement for their former superintendent Ricardo Lopez, who left the district last fall.

“We had some interviews regarding the superintendent search yesterday and I just want to hire a superintendent who can actually stay here a while,” Rodgers said, noting that Lopez left after five years with the district. “We need an amazing leader with transparency, integrity and respect more than anything.”