Advocating for a governmental return to Christian values, Reverend Rafael Cruz’s speech-turned-sermon at a recent event in Mission called for local churches to rise up.

The Mayor’s Prayer Luncheon drew residents from across Mission to pray for the well-being of the city. Held Thursday May 3 at the Mission Event Center, the luncheon included music from AllHeart Worship and the Veterans Memorial High School varsity mariachi group Toros de Plata. 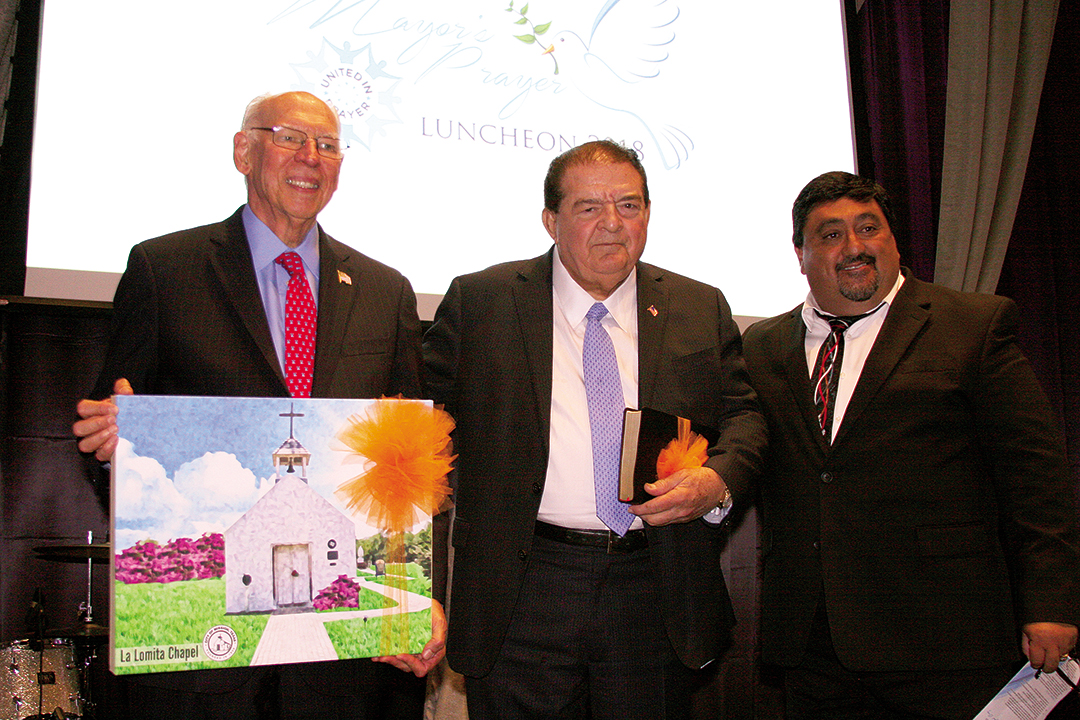 Churches from all over the city were represented that day, as pastors and priests from First United Methodist Church, North Mission Church of Christ, El Divino Redentor, The Bridge Church, AllHeart Church, Freedom Life Church, St. Paul’s Catholic Church Connections for Christ and New Hope at the Border spoke.

Reverend Rafael Cruz, father of Texas senator Ted Cruz, was the keynote speaker at the event.

Things got political as a few of the guests invited to speak, Cruz included, praised Mayor Norberto “Beto” Salinas’ work in the city of Mission.

“It is not coincidental that he has been mayor for 20 years,” Cruz said. “May God keep him as mayor for another 20. Jesus said, ‘He who wants to be the greatest of all must become the servant of all.’ And Mayor Salinas truly has a servant’s heart.”

Cruz, who grew up in Cuba under the dictatorship of Fulgencio Batista, moved to America and graduated from the University of Texas at Austin. Cruz spoke about his pride in being an American citizen, and how it has shaped his life.

“I am so proud to be an American,” Cruz said. “This is the greatest country on the face of the Earth.”

“Pastors were at the forefront of the American Revolution, churches were at the forefront,” Cruz said.
“You look at the Declaration of Independence, 26 grievances against King George. Did you know that each and every one of those grievances were preached at the pulpits of America for ten years? It was pastors from the pulpit calling out King George for the atrocities the British were perpetrating on the American people. The question is, where are those pastors today?”

Salinas spoke at the event as well, and said that he was glad to see so many people attending the event. The luncheon was held on the National Day of Prayer, and Salinas felt it was important people recognize the role religion plays in the city.

“This is why we have done so well,” Salinas said. “We have always been gathered together by a bunch of churches. I support and help and want to do as much as I can to support our churches. We have so many churches.”
Salinas said the city is blessed that so many people pray for Mission every day.

“I want to take this opportunity to tell you about how Mission has been respected by so many in the state of Texas,” Salinas said. “Because it’s something that has to do with a lot of people that care. They’ve done so much for this community, and I feel very proud.”

Pastor Cathy Garcia, from Freedom Life Church, announced that the Mission Food Pantry would be holding a food drive for Mission families starting May 28 through June 1 to provide food during the summer months. Non-perishable food items can be dropped off at the Mission Event Center during the drive from 7:30 a.m. to 6 p.m.

“Can we provide for our community?” Garcia asked. “I believe that we can, and we invite you to be part of this food drive. I know it will help our community and the children in our city.”