It didn’t take long for Casey Smith’s winning ways to carry over to Pioneer High School.

After eight years as the head baseball coach at Mission Veterans lined with playoff appearances and district championships, Smith made the move to lead the Pioneer Diamondbacks. In just one season, his impact has been evident as the Diamondbacks qualified for postseason play for the first time in program history and are now onto the area round after picking up a bi-district championship last weekend. 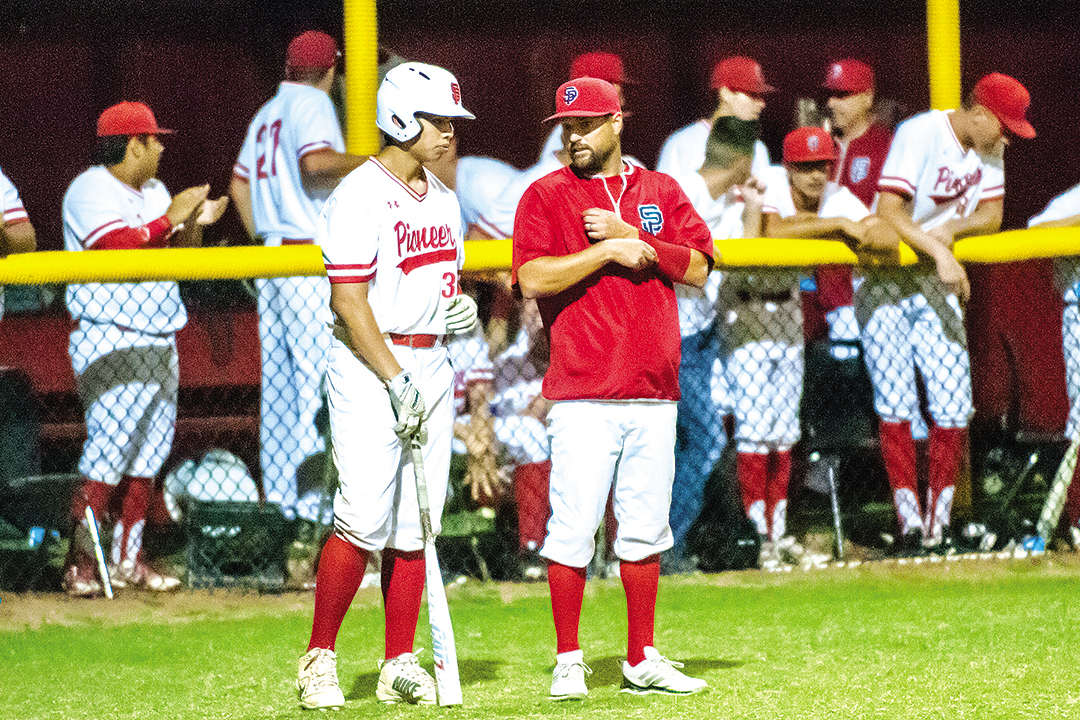 “From the beginning, one of the things that we tried to change was the culture, and just the idea that we’re going to work at the end of the day and keep coming back,” Smith said. “I think the most improvement I saw was in their mentality and their work ethic. … It was really neat from a personal standpoint; it’s nice because you get to see kids raise their level of play, raise their level of expectation, and can see the fruits of that labor for them come through. It’s neat to see the smile on their faces, the excitement and the feeling of accomplishment for them.”

The Diamondbacks have a sign on their door that reads “you reap what you sow”, and Pioneer reaped the benefits of their hard work with an opening round win over Brownsville Veterans Memorial, District 32-5A’s 14-0 champion. In Game 1, Pioneer pulled out a close 7-6 win over Brownsville Vets with Jacob Rosales on the mound for the Diamondbacks. After dropping Game 2 by a score of 9-1 and facing a win-or-go-home situation in Game 3, Pioneer came out and dominated the elimination game with a 10-0 win led by sophomore pitcher Evan Maldonado, who delivered a complete game shutout.

“We were real confident that we were going to come back and play well in Game 3,” Smith said. “We didn’t play poorly in Game 2, I thought we played hard and battled. Brownsville Veterans played well and got some bounces their way but our kids continued to battle, continued to fight, and that bodes well when you see that entering a Game 3 because your kids are going to continue to fight and lay it on the line when it all counts.”

Now, the Pioneer Diamondbacks are preparing for their area round best-of-three series against Corpus Christi Veterans Memorial which begins tonight.

“I think we’re loose,” he said. “We’re coming to work everyday with the idea that we’re trying to get better. I feel fairly confident that come Friday night when we step on the field, we’ll be ready to play.”

The best-of-three series between the Pioneer Diamondbacks and Corpus Christi Veterans Memorial begins tonight at 7 in Alice at Alice High School. Game 2 is set for Saturday at 1 p.m., with Game 3, if necessary, to be played 30 minutes after, both in Alice.

Mission Eagles
The Mission Eagles marched their way into the area round by sweeping San Antonio Southwest with scores of 3-1 and 8-3 to bring home a bi-district championship.

In Game 2, Eddie Rodriguez hit a two-run bomb in the top of the fourth inning to extend the Eagles cushion of a lead helped built by J.R. Cortez and Zoy Hernandez.

The Rattlers picked up a bi-district championship by coming from behind to knock off Edcouch-Elsa 2-1 in their best-of-three opening round series. After dropping Game 1 by a score of 2-1, the Rattlers stormed back to win Game 2 6-4 and Game 3 10-4.

Sharyland’s area round opponent is the Calallen Wildcats with the best-of-three series’ first pitch set for 7 p.m. tonight at Calallen High School. Game 2 will be played Saturday at Sharyland High School at 3 p.m. with Game 3, if necessary, played 30 minutes after.