Ten track and field athletes from the seven Mission, Sharyland and La Joya ISD high schools, the Big 7, qualified for the University Interscholastic League’s (UIL’s) State Track and Field 2018 Championships that took place this past weekend at the University of Texas Austin’s Mike A. Myers Stadium. Of those 10 athletes, six competed in individual events while four competed as part of a relay team.

The competition was fierce as the best-of-the-best track and field athletes from across the Lone Star State went head-to-head against each other in running, jumping and throwing events such as the 400 meter dash, the triple jump and the shot put. And while the Big 7 athletes that made the trip to Austin all did their best, and made their schools, parents and coaches proud, unfortunately, not one of them succeeded in bringing one of the highly coveted state medals back to the Valley with them. 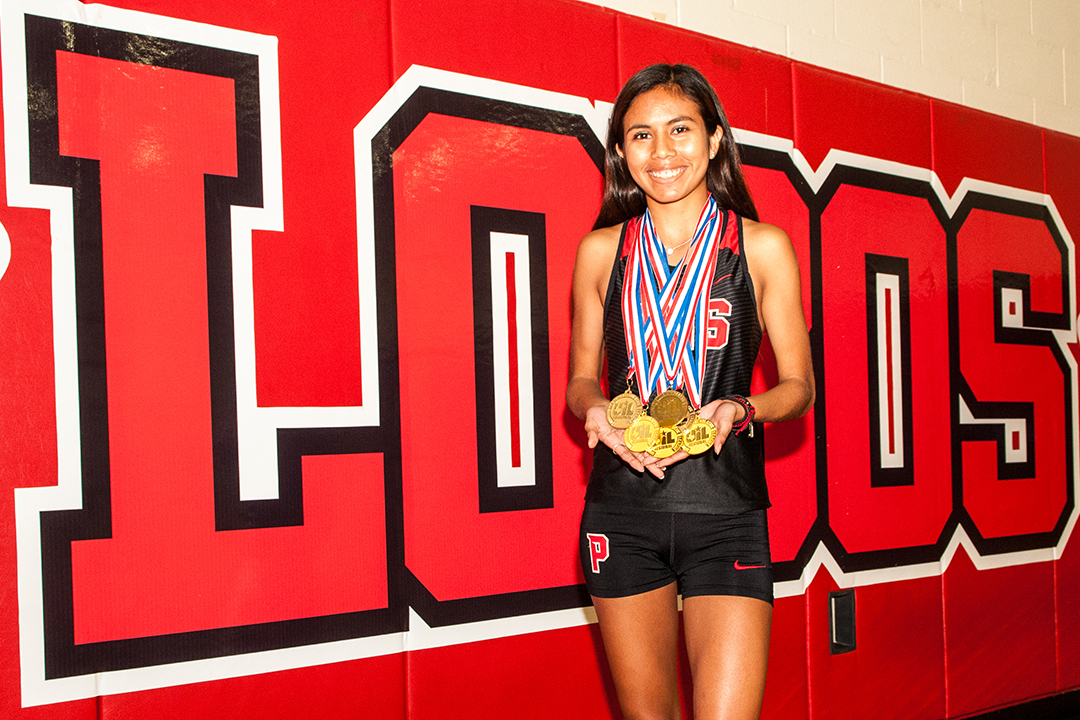 Even so, qualifying for the state meet is a worthy accomplishment in-and-of itself so let’s take a look at how these athletes fared in their respective events starting with the only one to qualify in two different events, La Joya Palmview’s Brianna Robles.

Robles, last year’s All Valley Girls Cross Country Athlete of the Year, qualified for state in both the 1,600 and 3,200 meter runs just as she did last year. While her sixth place finishes in both events this year were an improvement over her two eighth place finishes last year, Robles couldn’t help being disappointed in the fact that she fell short of her goal of adding two state medals to her extensive collection of District, Area and Regional medals.

“I was mostly disappointed by the fact that I ran the same times as I did last year,” Robles said. “I really wanted to PR (set a new personal record) but when I didn’t I was disappointed.”

Measuring in at 5 feet tall and weighing only 89 pounds, Robles is not your typical looking athlete. However, the fact that she is one of the top high school distance runners in the state has made it possible for her to receive a scholarship to Adams State University in Alamosa, Colorado where she plans on studying communication in hopes of becoming a sports journalist.

With her high school running career now behind her, Robles reflected back on what her favorite moment as a Lady Lobo was when she said, “Making it to state in cross-country with all of my team. We did that this school year.”

As for what it’s meant to her to be a member of the Lady Lobos cross-country and track and field teams for the past four years and to be able to represent Palmview High school at the state meet like she has, Robles said, “It means a lot to me. It also goes to prove that if you put in the effort, it will pay off in the end.”

As the only Big 7 athlete that went into the state meet as a gold medal favorite, Sharyland Pioneer shot putter Johnny Howell was considered to be as close to a sure-thing in regards to bringing home a state medal as any of the Big 7 schools have seen since Palmview’s two-time state champion shot putter Felipe Valencia was going into the 2013 and 2014 state meets. That’s because his best regional meet throw of 57-09.00 was nearly two feet further than his nearest state meet competitor’s best throw. And when it comes to a sport in which the top finishers are usually separated by mere inches, two feet is huge. In addition, Howell threw 62-04.00 during practice just two days before the state meet according to his coach David Munson.

Unfortunately, Howell sprained his ankle during warm-ups the morning of the state meet so he was not able to compete. As it turned out, the gold medal winning throw of 56-03.75 was well within Howell’s capabilities so he very well could’ve brought home the gold medal, or at least the silver or bronze medal, had he not suffered the injury.

With his fifth place finish in the triple jump, Sharyland High’s Blake Klein was the top finishing Big 7 athlete at this year’s state meet. The Lady Rattlers’ Valeria Diaz placed eighth in the 1,600 meter run while the Lady Diamondbacks’ Daizy Monie placed ninth in the discus throw.

Mission High’s Alex Cordova was the only MCISD athlete to qualify for the state meet. He represented his home town very well by placing seventh in the 400 meter dash.

As for the only 6A boys’ relay team from the Valley to qualify for the state meet, Juarez-Lincoln’s 4 x 400 meter relay team, made up of Kenneth Gonzalez, Harley Vargas, Jose Maldonado and Elias Gutierrez placed ninth with a time of 3:23.90.