Putting up numbers is nice, but what’s better is winning.

Two athletes from Mission Veterans High School were able to do both this year, leading their teams statistically en route to district and bi-district championships, and are now up for player of the year awards. 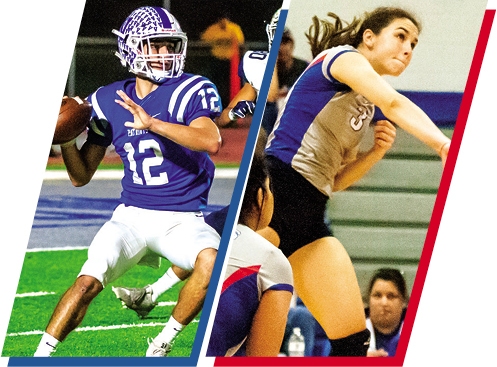 Junior quarterback Landry Gilpin and sophomore outside hitter Jackie Howell were nominated as Football and Volleyball Players of the Year at the 2018 All-Valley Sports Awards Banquet on June 19 at Mario’s Banquet & Conference Center in Mission.

Landry Gilpin
Before the season’s start last Summer, Landry and David Gilpin had a conversation. The quarterback told his father and Patriots’ Head Coach they needed to bring a district championship to Veterans Memorial.

In Gilpin’s first full year as a starter, the dual-threat quarterback delivered and posted video game-like statistics while leading the Patriots to a 10-win season that ended with bi-district championship and a share of the District 31-5A Championship.

The junior garnered All-Area Player of the Year and All-State Honorable Mention awards as the junior put up 3,172 yards through the air, 1,718 on the ground, and accounted for 48 combined touchdowns. He also completed 56 percent of his passes and threw just five interceptions on 375 attempts.

Gilpin’s signature performance came in the Patriots’ first game of the season, a meeting against the powerhouse Harlingen Cardinals. He burst onto the scene as a quarterback just seven minutes into the first quarter with a 91-yard touchdown on the ground, spinning off two defenders and outrunning the nine others for game’s first points. The Patriots would go on to win the game 31-26, the start of their streak of eight straight victories.

The Patriots picked up a bi-district championship with a 25-17 first round playoff win over Brownsville Lopez but made a second round postseason exit after losing to Flour Bluff.

Head Coach David Gilpin said the quarterback’s success is due to him putting in the work on a daily basis and the support around him, from teammates to coaching staff.

“Landry is the guy that has to come and bring it on a daily basis, in practice, in the weight room, in summer conditioning, and Landry embraced that,” he said. “He understands that as he goes, that’s a lot of the way our team goes, and he has to lead by example. He understands completely that nothing he does can be accomplished without his teammates, without his coaching staff, and he’s very appreciative for the effort they’ve put in that’s enabled him to have the kind of success he’s had. He’s a special high school player.”

The two nominees Gilpin is up against for for Football Player of the Year are Kai Money from St. Joseph Academy and Erick Retta from San Benito.

Jacqueline Howell
It’s been five seasons since the Lady Patriots have dropped a district game. A large part of the team’s success in picking up another district championship in 2017-2018 was the play of junior outside hitter Jacqueline Howell, who was voted 31-5A’s co-MVP by the league’s coaches.

Howell helped lead the Lady Patriots to a perfect 16-0 district record, 31-4 on the year, and totaled 515 kills, 345 digs and 77 aces. She has been an All-Area selection in both of the last two years, making the jump from second team to first team in her sophomore and junior seasons.

The Lady Patriots didn’t even lose a set in 31-5A play, winning 51 straight, including a 3-0 first round playoff win over Brownsville Lopez to claim a bi-district championship.

Howell was also nominated at last year’s All-Valley Awards Banquet for the Sub-6A Athlete of the Year for her multi-sport performance on the volleyball and basketball courts.

The winners of the Volleyball and Football Player of the Year awards will be announced at the 2018 All-Valley Sports Awards Banquet on June 19 at Mario’s Banquet & Conference Center in Mission.

The banquet is hosted by RGVSports.com and AIM Media Texas in conjunction with the RGV Sports Hall of Fame, and will present 33 awards to athletes, coaches and teams across all 12 UIL sports. The prestigious Tom Landry Award of Excellence will honor a student-athlete for outstanding achievements on and off the field.

Sean Elliott, the former NBA champion with the San Antonio Spurs and the team’s color commentator, will be the keynote speaker at the event, which will run from 6 to 8 p.m.

Tickets for the banquet are $40 per person.