Attracting people who live all over the Rio Grande Valley, the Texas Writes Program gave local writers the opportunity to grow.

The Writers’ League of Texas organizes free workshops in local libraries across the state. Funded by the Tocker Foundation, the Texas Writes Program is a way for writers of every age to gain free insight from published writers across Texas. 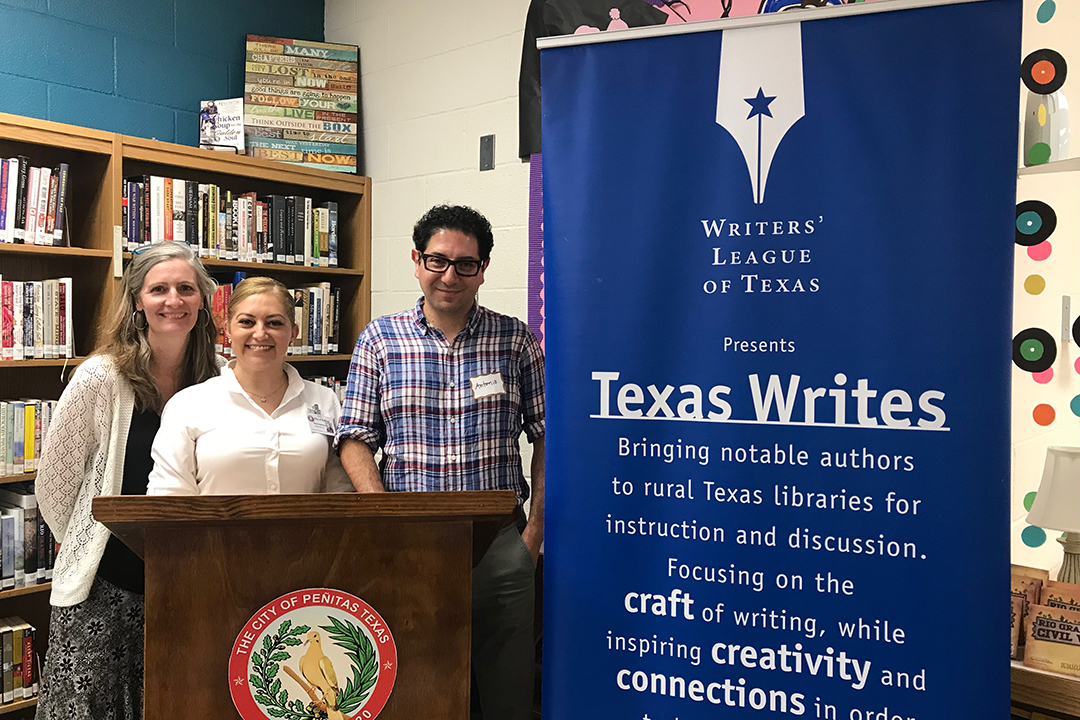 The Pe&ntilde;itas Public Library held the first Texas Writes Program in the Valley Saturday, May 12.

The program included two writers from the state who are active in the Writers&rsquo; League, Charlotte Gullick and Antonio Ruiz-Camacho. Gullick, the Chair of the Creative Writing department at Austin Community College, has been a speaker at multiple Texas Writes Programs.

“I grew up in a town of 200 people,&rdquo; Gullick said. “My graduating class from high school had six. So they had a library that was about the size of the children&rsquo;s area [in the Pe&ntilde;itas Public Library], and I just love libraries so much.&rdquo;

Gullick&rsquo;s first novel, By Way of Water, was the grand prize winner of the Santa Fe Writers Project, and she has been published in Brevity, LA Review, Hippocampus and Pithead Chapel. Her presentation was about incorporating the four seasons in your writing as a method of bringing more life to any piece.

Ruiz-Camacho, originally from Toluca, Mexico, has been published in The New York Times, Texas Monthly and Salon, amongst other things. His short story collection Barefoot Dogs, the winner of the Jesse H. Jones Award for Best Book of Fiction, was highly praised in the Kirkus Reviews, San Francisco Chronicle and Texas Observer.

“The Valley is a region that has always fascinated me,&rdquo; Ruiz-Camacho said. “I worked as a journalist for many years, and I have always tried to have some access to this part of the world.&rdquo;

This is also the first Texas Writes Program Ruiz-Camacho has been a speaker for, and he spoke about taking factual parts of everyday life and twisting them into fictional work in order to make it more personal. He said that inspiration can be drawn from everywhere.

“Writing can be a very isolating, solitary activity, powered by self-doubt,&rdquo; Ruiz-Camacho said. “That&rsquo;s what being a writer is. So I think it&rsquo;s very important to have a community, to have other writers who can offer you support and encouragement.&rdquo;

Yenni Espinoza, the Library Director for the City of Pe&ntilde;itas, was excited for what the workshop would do for the community.

“I&rsquo;ve seen a lot of people who, they either love to read or write, and sometimes you need that extra information just to know if your process is right,&rdquo; Espinoza said.
“So when I heard about the program, I was like, oh perfect, to have somebody who actually knows how the process works and give them that information so they know if they are on the right path with what they want to do, it was wonderful.&rdquo;

Becka Oliver, a coordinator from the Writers&rsquo; League of Texas, hopes that other libraries in the area may take an interest in bringing more opportunities down.

“My hope is that we establish a connection with a library,&rdquo; Oliver said. “I love the connection and thinking that it&rsquo;s not just this one event, that we&rsquo;re establishing something that might be beneficial for the future.&rdquo;

The events are completely free for the library and those who wish to attend, and are catered to what librarians believe residents in the area are writing about. In Pe&ntilde;itas, the common topic that Espinoza gave the league was family history.

“That&rsquo;s the most important part of the program to us, that it comes at no cost to the library,&rdquo; Oliver said. “It makes us feel that much more excited to know that we&rsquo;re being supported by the library and knowing that they are already reaching out to the community.&rdquo;

Eileen Mattei, Anita Westervelt and Deborah Ashley were some of the people in attendance at the Texas Writes Program, and were happy with what they were getting out of the event.

“I&rsquo;m a workshop junkie,&rdquo; Westervelt, a member of the Writers&rsquo; League from San Benito, said. “And I&rsquo;m a writer. I just don&rsquo;t get enough writing lectures and workshops for inspiration, not that I need it. It&rsquo;s always fun to go.&rdquo;

Ashley, originally from Athens, Alabama and now living in Edinburg, attended the event in order to establish new connections.

“I came to find new friends who write, and to also learn how to improve my own writing,&rdquo; Ashley said. “But the friends are really why I came.&rdquo;

Mattei, a resident of Harlingen who works as a freelance writer, is also a member of the Writers&rsquo; League of Texas.
“I thought I would learn something here,&rdquo; Mattei said. “And, I am learning.&rdquo;