For Veterans Memorial High School sophomore Alexis Treviño, as well as students from all over the Mission Consolidated Independent School District, the Advanced Academic Services Fair is an opportunity to highlight their accomplishments and develop their presentational, academic and creative skills.

This past Saturday May 19, MCISD held their 6th Annual Advanced Academic Services Fair. The event included representation from all 21 campuses in the district, ranging from children in kindergarten to seniors in high school, and involved presentations of various projects from Gifted and Talented Students and Advanced Placement Students, Robotics teams and Destination Imagination teams. 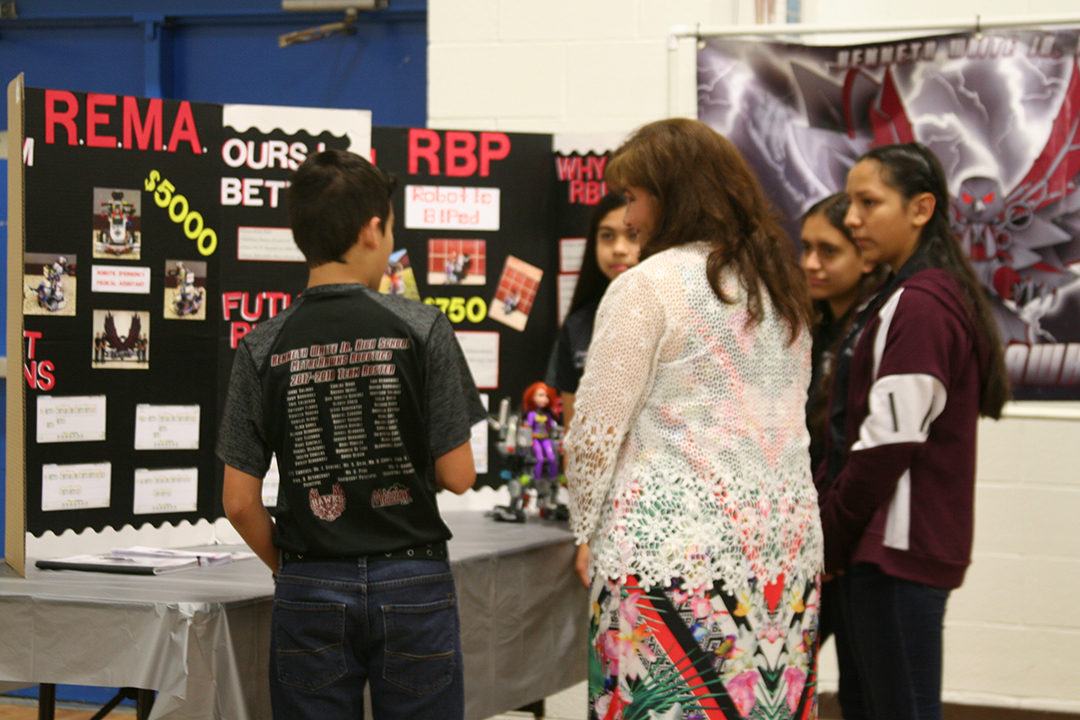 The fair took over both Veterans Memorial High School gyms, as well as the school&rsquo;s Band Hall and mariachi room. Dr. Sharon Roberts, MCISD Director for Advanced Academics, UIL [University Interscholastic League] and College Readiness, has been in charge of the event since its inception.

“What&rsquo;s been really great is seeing the kids who have inspired us as educators to want to provide more opportunities,&rdquo; Roberts said. “They all participate, work hard through the year to get their research, make their products and are able to communicate.&rdquo;

Roberts said that students are prepared and ready to show what they have accomplished to their peers and parents.

“I think they get excited about coming and showcasing what they&rsquo;ve done,&rdquo; Roberts said. “It brings the parents and the community members in, and they can see what our kids are capable of.&rdquo;

The administrator noted that some parents and residents in the Mission area may not realize just how much work and dedication Mission CISD students put into their academic projects every year.

“I&rsquo;m amazed at what some of our students can do, they teach me a lot,&rdquo; Roberts said. “And I think with the community, they see that too. It&rsquo;s different seeing what our kids can produce, rather just having it in theory.&rdquo;
Roberts was incredibly proud of the MCISD robotics teams.

Being relatively new to the district, she credits hardworking students and coaches for already making it far in competition.

“It really inspires everybody,&rdquo; Roberts said. “The parents really enjoy it, and that&rsquo;s what it&rsquo;s about, it&rsquo;s a learning opportunity for everybody.&rdquo;

Alma Garza, a teacher at Alton Elementary School, was one of the many MCISD employees in attendance. She said that she was proud of the immense talent exhibited, and saw it as a great chance for students to grow in several aspects.

“The kids get to show off what they do in the classroom, and they get so excited,&rdquo; Garza said. “And coming to show it to their parents and the community is just awesome for them.&rdquo;

Garza said that parents get especially excited, and enjoy taking pictures and listening to students discuss their projects. According to her, students will gain important skills through these types of events.

Alexis Trevi&ntilde;o, a student at VMHS, did her presentation on a potential career path – becoming a physician&rsquo;s assistant. She got her inspiration from her aunt, who works as a PA.

“I just really love helping people,&rdquo; Trevi&ntilde;o said. “I want to be in the medical field, and this was one of my options.&rdquo;

For Trevi&ntilde;o, who has participated in the Advanced Academic Services Fair before, gathering the information and research as well as interviewing her aunt about the profession took about a month. She spoke about their contributions in medicine.

“Patients say that they improve the quality of health care, they make appointments easier and they are trusted healthcare providers,&rdquo; Trevi&ntilde;o said. “I believe that without a physician assistant, society wouldn&rsquo;t be where it is right now because people are always getting sick, and they always need someone to go to.&rdquo;

Hundreds of parents attended the Advanced Academic Services Fair, including Isabel Salinas. Two of her children were presenting at the fair, one of which is a team captain for Kenneth White Junior High&rsquo;s robotics team, the Metalhawks.

She said her son has learned a lot since joining the K. White Metalhawks, and what he takes from the experience will benefit him in the long run.

“He&rsquo;s gotten so much out of his comfort zone,&rdquo; Salinas said. “He&rsquo;s been able to speak up and be a leader for the team. It has a lot of science involved, and he wants to be a pharmacist, so I think that combining science and pharmacy, it&rsquo;s going to help him combine both to be able to help him with what he wants to pursue in the future.&rdquo;
For Roberts, the fair was a success that contributes to the educational environment hoping to encourage Mission students and educators to “change the world.&rdquo;

“Our teachers go above and beyond,&rdquo; Roberts said. “And our students thrive.&rdquo;