As the nominations for the 2018 All-Valley Sports Awards Banquet are unveiled, several athletes from Big 7 teams are being recognized Valley-wide for their success on the field, court, and track over the past year.

The 2018 All-Valley Sports Awards Banquet, hosted by RGVSports.com and AIM Media Texas in conjunction with the RGV Sports Hall of Fame, is set for June 19 at Mario’s Banquet & Conference Center in Mission and will honor the best athletes from across the Rio Grande Valley. 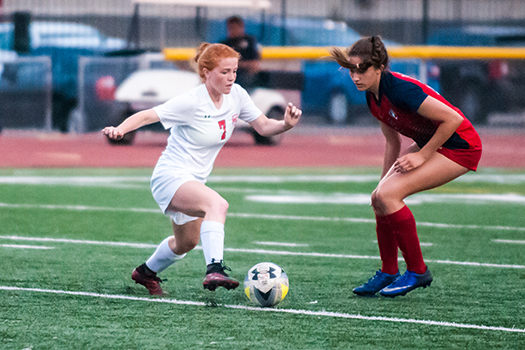 Sharyland soccer’s Kaitie Watson is one of the Big 7 athletes nominated for a player of the year award after putting together a successful campaign on the soccer field for the Lady Rattlers in 2018.

For the second time in three years, Watson, one of the Valley’s top scoring threats and District 31-5A’s co-Most Valuable Player, is up for the All-Valley Girls Soccer Player of the Year award.

After being nominated for the award in 2016, Watson missed time with a leg injury in 2017. The senior said she’s happy to have the opportunity as an All-Valley nominee and is hoping to go out with a bang.

“I’m very honored to have the privilege of being nominated again and I’m so happy to have the opportunity again, especially since I’m a senior, so hopefully I can go out with a bang,” she said.

Watson was responsible for 72 goals for the Lady Rattlers this season, scoring 51 of her own and assisting on another 21, even while being marked by one, two and three defenders at times.

The forward also was a knack to make big plays in big moments, as big-time players do. It was Watson’s free kick goal with four minutes left against rival Pioneer in their March 6 meeting with the 31-5A championship on the line that forced overtime, allowing the Lady Rattlers to eventually claim another district title.

“My hard work and dedication to the sport after all these years has paid off and really proven its worth,” she said. “To be able to have this privilege while being apart of Sharyland really makes me proud of where I’ve come from and all that I’ve worked toward.”

Watson will continue playing soccer at the next level as the Lady Rattler great has signed to play for the University of Texas Rio Grande Valley.

Brianna Robles, Palmview Cross Country
Palmview’s Brianna Robles is nominated for the Girls Cross Country Athlete of the Year for the second year in a row and hopes to add another honor to her collection after taking home the award last summer. Robles won the District 30-6A championship for the third consecutive year by running a season best time of 18.22.6. Robles qualified for her third straight UIL state competition where she finished in 32nd place. Robles will continue her athletic career as she’s signed to run collegiately at Adams State University in Colorado.

Gerardo Reyes, Juarez-Lincoln Soccer
The Juarez-Lincoln Huskies’ scoring-machine, forward Gerardo Reyes is nominated for the Boys Soccer Player of the Year after leading his team to another District 30-6A championship in 2018. Reyes sparked the Huskies’ offense all season with 29 goals on the year. A year after making a run to the state tournament in 2017, the Huskies qualified for this year’s regional tournament but fell short to the state runners-up San Antonio Reagan.

Michael Howell, Mission Veterans Tennis
Junior Michael Howell is nominated for the Boys Tennis Player of the Year award after winning the District 31-5A singles title in a two-set sweep. Howell was one of the few Valley representatives to win his first-round match at the regional tournament in April.

Jin Mun Lee, Sharyland Golf
Junior Jin Mun Lee has been nominated for the Boys Golf Player of the Year award in each of his three seasons at Sharyland and will be looking to go back-to-back after bringing home last year’s award. In 2017-2018, Lee dominated the District 31-5A with a first-place finish, pushing Sharyland to a second overall. He then won the regional tournament before finishing third-place in the state tournament.

The award winners will be announced at the 2018 All-Valley Sports Awards Banquet on June 19 at Mario’s Banquet & Conference Center in Mission.

The banquet is hosted by RGVSports.com and AIM Media Texas in conjunction with the RGV Sports Hall of Fame, and will present 33 awards to athletes, coaches and teams across all 12 UIL sports. The prestigious Tom Landry Award of Excellence will honor a student-athlete for outstanding achievements on and off the field.

Sean Elliott, the former NBA champion with the San Antonio Spurs and the team’s color commentator, will be the keynote speaker at the event, which will run from 6 to 8 p.m.

Tickets for the banquet are $40 per person.