This article first appeared in the Friday, May 25 edition of the Progress Times

When it first opened in 1968, the Sharyland Water Supply Corporation served 700 customers in northwestern Hidalgo County.

Now, 50 years later, the water company has three water plants with the ability to produce a total of 22 million gallons of water per day spread out in their service area that covers 18,000 customers in Alton, Palmhurst, a portion of McAllen and northwestern Hidalgo County. 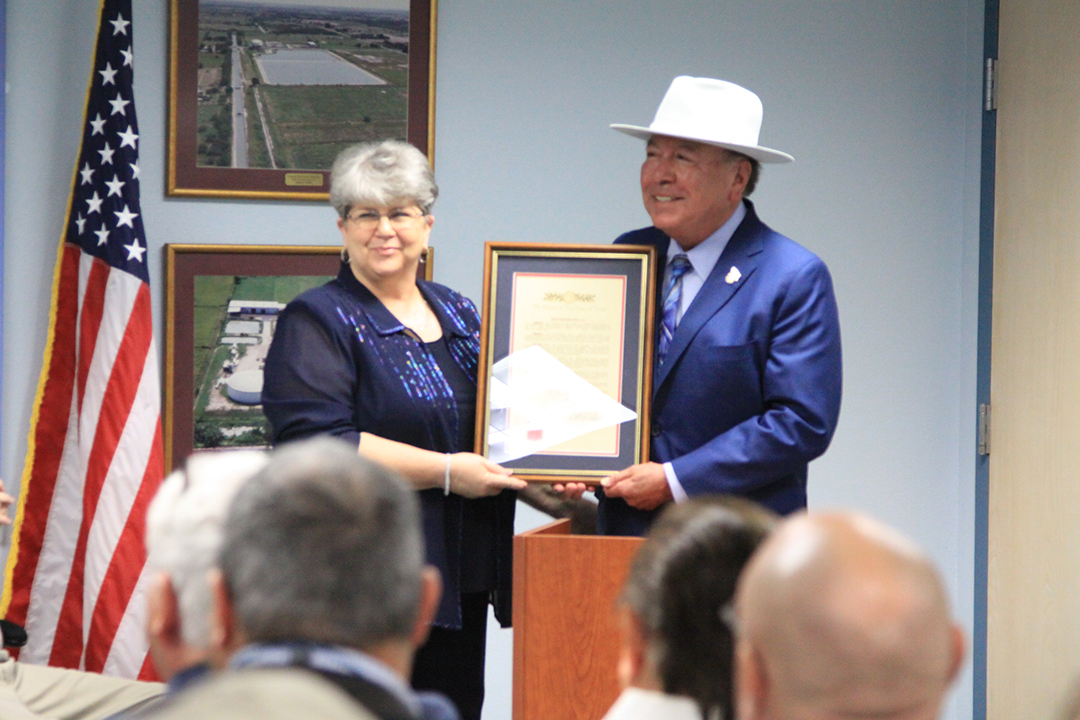 “This was started by community individuals who lived in and around the Sharyland area as farmers, businessmen and owners,&rdquo; General Manager Sherilyn Dahlberg said Tuesday. “They saw a need for affordable drinking water in the area and through this vision, created the Sharyland Water Supply Corporation.&rdquo;

Dahlberg was among the many in attendance at the celebration of the water corporation&rsquo;s 50th anniversary, held Tuesday at the company&rsquo;s headquarters at 4210 E. Main Ave. in Alton. Among those in attendance were officials from the cities of Alton, Palmhurst and representatives from the offices of Texas Governor Greg Abbott, State Representative Bobby Guerra, Se. Ted Cruz and Sen. Juan “Chuy&rdquo; Hinojosa.

Hinojosa presented a resolution to the corporation that recognized the water corporation for all their years of service.

“The growth in the Valley depends on clean water that our families rely on. Today, [Sharyland Water Supply Corp.] provides 18,000 connections to a population of 17,000 people to become one of the largest water supply corporations in the state,&rdquo; Hinojosa said. “They&rsquo;ve played a vital role in ensuring people in rural areas in the county have access to clean water.&rdquo;

For Dahlberg, the anniversary is momentous, as she has been with the water supply corporation for over 40 years.

In 1976, she got a job with the corporation as a clerk and eventually moved her way up as general manager.

“It&rsquo;s been a natural progression for me, it feels like I&rsquo;ve grown up here and been part of everything that&rsquo;s been good, difficult and worked through them,&rdquo; Dahlberg said. “I feel very blessed to be part of such an important, relevant organization in this county.&rdquo;

Dahlberg reflected on the 50 years of growth for her corporation, which opened a third water treatment plant January 2016 near the intersection of Mile 6 and Los Ebanos Rd.

“I could not imagine this area would grow to the size it is, we&rsquo;ve always lived in a small area but we are fully prepared for an ever changing growth,&rdquo; Dahlberg said. “It&rsquo;s been 50 years of growth and challenges and we have been dedicated to meet the drinking water needs of our community.&rdquo;

Ultimately, Dahlberg said, the corporation is getting ready for more growth as the water treatment plants have the capacity for up to 6,000 new connections.

“As all the land we have for agriculture and citrus in the area start turning into developments, we&rsquo;ll be adding more customers and services and look at another facility once the existing systems grow out,&rdquo; Dahlberg said. “It&rsquo;s very rewarding seeing people acknowledge all the hard work everyone has put in in these last 50 years as important to the community. We have great expectations for doing everything the community needs in terms of water service whether it means business, residential or medical, we are committed to taking care of them.&rdquo;