This article originally appeared in the Friday, June 1 2018 issue of the Progress Times

At a special ceremony Tuesday, two new trustees for South Texas College were sworn in-one of whom will now represent citizens living in western Hidalgo County.

Victoria “Vicky” Cantu and Rene Guajardo were sworn in for District 2 and 6, respectively. They joined incumbent Rose Benavidez, District 1 trustee who represented Starr County, after the three dominated at the May 5 general elections. 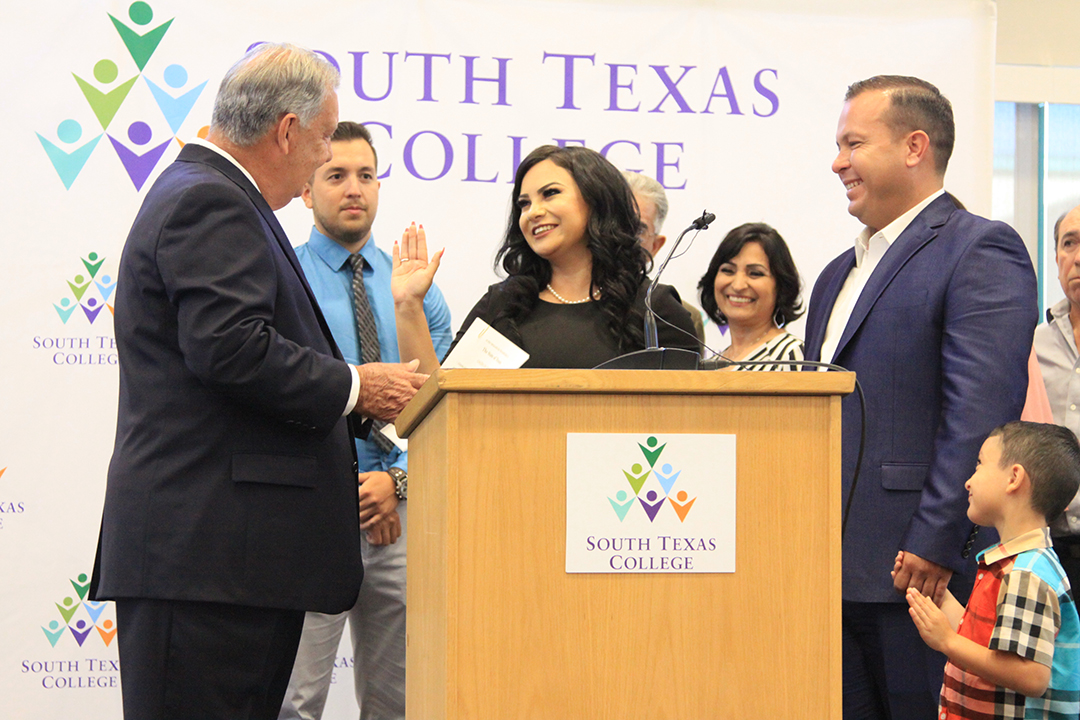 Benavidez was the only incumbent who kept her seat. She was sworn in last week in Starr County and was elected into office for a third, six-year term after taking 2,795 votes while her opponent John Pope IV had 1,249 votes.

Guajardo took 57 percent of the election with 588 votes while Cantu won in a landslide with 70 percent, or 3,589 votes.

“I truly believe higher education is a pathway to success and we need to provide support and resources to help students be successful,” Cantu said at her swearing-in. “As a trustee, I want to make a difference, I want to be that direct impact in a student’s success… I want to bring new ideas, experiences and cutting edge programs to STC so we can offer more competitive opportunities and be part of that team for students who want to pursue education at STC.”

Cantu will represent the communities of La Joya, Western Mission, Palmview, Sullivan City, Peñitas and Alton. She earned a bachelor’s degree in communication science and disorders from Texas A&M University-Kingsville and co-owns a daycare center in Peñitas.

Attendees to the swearing-in ceremony included officials from the cities of La Joya, Peñitas, the La Joya school board and, the Agua Special Utility District.

She was sworn into office by former city of McAllen Mayor Richard Cortez who spoke highly of Cantu.

“Everyone wants a good future for their families and we have an institution that is extremely important to them,” Cortez said. “It’s important to elect people like Vicky, she’s loving and caring and wants to serve her community, what we were born to do. I’m very excited for the value Victoria will bring to this team and look forward to more accolades and successes for the campus.”

Alejo Salinas, chairman for the STC board of trustees, spoke of the growth of the campus which is in the process of completing 29 construction projects across Hidalgo and Starr counties as part of a $159 million bond voters approved in 2013.

“There is another possibility of going after another bond at the rate we’re growing and the needs of the community-that might be coming up in the near future,” Salinas said. “We want everyone to help us grow to help us continue to provide the best options for our students in the two county community that we serve.”

Cantu said she will focus on assisting people in the community with college readiness and accessibility in her six-year term. She hopes partnerships between the school and the community will help the public with those challenges.

“I am definitely open to seeing what college readiness programs are working, what may need improvements and what other challenges and opportunities regarding college readiness and access to higher education are affecting our community,” Cantu said. “I look forward to working with our partners in the local school districts, our business partners, and in our community, to find solutions to these challenges.”