Members spent just five minutes in executive session on June 1 before approving the contract extension, which will keep Romero employed through 2020. The contract includes a $72,600 annual salary, standard benefits and a car for city business. 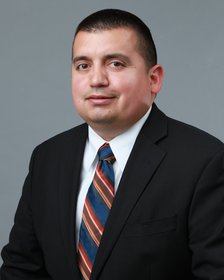 “He’s done an outstanding job ever since he came over to the city,” said Mayor Pro-Tem Alex Guajardo. “We’ve seen the growth in the city. We’ve seen the way he attracts businesses.”

The City Council hired Romero after City Manager Oscar Cuellar Jr. abruptly resigned in July 2015.
Mayor Rodrigo “Rigo” Lopez and the City Council received more than a dozen applications for the job but weren’t impressed by the resumes.

They took a chance on Omar X. Romero, 34, of McAllen, who worked for Oscar R. Gonzalez CPA and Associates — his grandfather’s firm. Romero had a business and accounting background, but he’d never worked for a city before.

That paid big dividends for Peñitas, which benefited from Romero’s business connections.

“One hundred percent of what we do is dedicated to growing the city,” Romero said. “Whether it’s focusing on road projects, improving drainage (or) attracting new retailers.”

Working with the Texas Department of Transportation and the Hidalgo County Metropolitan Planning Organization, the city made progress on several long-planned road projects.

The Department of Transportation approved an advance funding agreement for the extension of Liberty Boulevard from U.S. 83 to Mile 3 Road last month.

“Which is a major project that’s been in the works for 10-plus years,” Romero said.

Funding for the Diamond Avenue project will come from a partnership between Peñitas, the city’s twin economic development corporations and a Tax Increment Reinvestment Zone, which leverages property taxes for infrastructure improvements.

Diamond Avenue is an integral part of a long-term plan to develop the property, which will generate sales and property tax for Peñitas.

“Those projects — some were slated prior to me coming onboard,” Romero said. “But we were able to facilitate getting them all started and moving forward with their completion while I was here.”

“The city is growing the way it is, at the pace that it’s growing — a lot of it has to do with the leadership under Mr. Romero,” Guajardo said.