With the Valley’s record high summer heat making its annual appearance, a new water park is providing a venue where families can cool down.

The La Joya Independent School District has recently opened the water park, natatorium, tennis courts and basketball courts in the Sports and Learning Complex to the public for the summer. The facilities, located at 1801 Western Rd. in Mission, will remain open until the weekend before Labor Day. 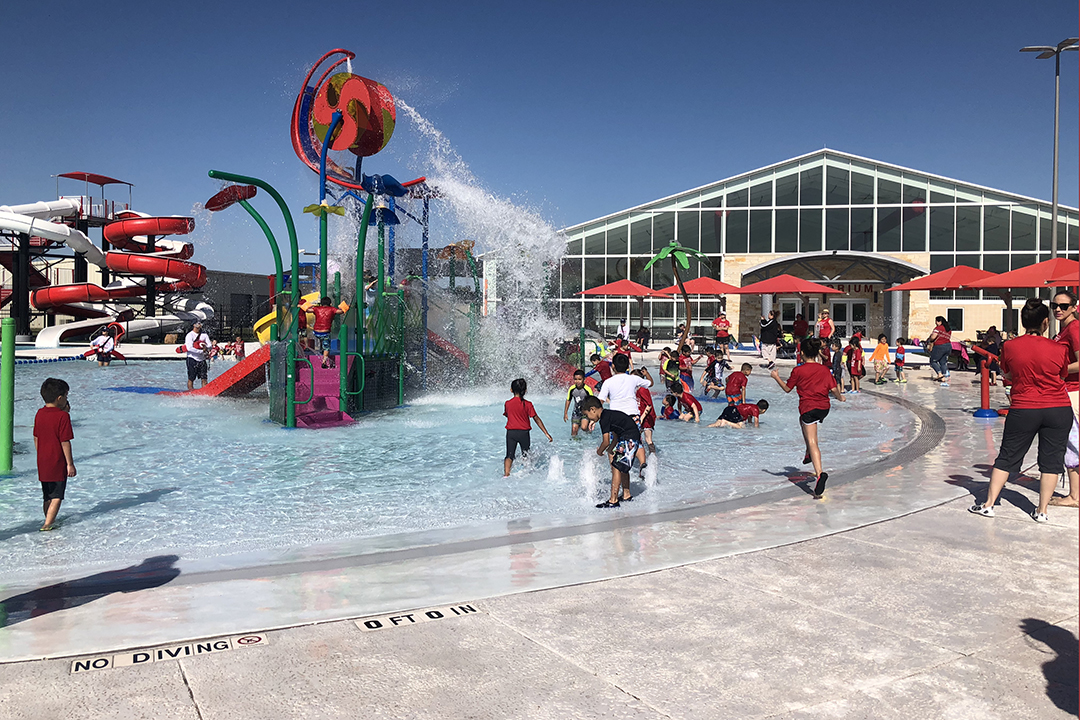 The district is also offering several classes to young people in La Joya, opening up the opportunity for kids to learn to swim, refine their tennis skills and gain traction in golf. According to the Sports & Learning Complex director, Victor Garza, everyone is really eager to see how all the facilities will be used during the first summer the complex is open to the public.

“It&rsquo;s pretty neat to see,&rdquo; Garza said. “They&rsquo;re able to bring out the family and have an affordable day together and enjoy.&rdquo;

The water park opened on Memorial Day, and has seen several hundred people each day since. Last Sunday, the park had its biggest turnout yet, and parents are happy to see their children out and about in a safe environment.

“We needed this to keep our kids away from being out on the streets, or being at home on the computer or phone, social media, or just being stagnant at home and not doing any physical activity,&rdquo; Garza said. “And more importantly, they can come in and do things as a family.&rdquo;

While it closes on Wednesdays for maintenance and training, the LJISD Water Park is open six days a week from 12 p.m. to 7 p.m. According to Garza, it has drawn people from all over the Rio Grande Valley.

“We had 804 people come in on Sunday,&rdquo; Garza said. “We even had a large family from Rio Grande City make a day out of it.&rdquo;

The goal of the park is to provide a fun way for families to spend time together and not break the bank. Admission is $8 for adults, $5 for kids age 0 to 17, and $5 for senior citizens 55 and up.

Because no outside food or drinks are allowed into the park, LJISD sells concessions, offering burgers for $3, hot dogs, pizza, burritos and nuggets for $2 and several combos, chips, sweets and drinks. Due to the large turnout last Sunday, the park even temporarily sold out of burgers.

“It does very well, so prices are very inexpensive,&rdquo; Garza said. “We try to keep them low so we don&rsquo;t drain and put a strain on the families.&rdquo;

The summer programs being offered to LJISD students have already begun registration. The swimming classes have already been booked through mid-July, with spots still available for the end of July and early August.

Xavier Samuel Escobedo, a supervising senior lifeguard at the LJISD Sports and Learning Complex, said that it was great to see how many people were utilizing the facilities.

“It&rsquo;s been a lot of fun,&rdquo; Escobedo said. “Everybody seems to be pretty happy. I&rsquo;m hoping it gives the younger kids a chance to learn how to swim.&rdquo;

Escobedo, who also is one of the teachers for the youth swimming programs, said that being able to teach people how to swim is something they can take with them wherever they go, including South Padre Island.

“It&rsquo;s a big impact that parents want their kids to learn, especially at the younger ages,&rdquo; Escobedo said. “Because, of course if they take them to the beach, South Padre, or the Six Flags water park, if they do their lessons here, if they learn everything that they&rsquo;re supposed to, they don&rsquo;t have to be worrying about it even if they go some place else.&rdquo;

The complex hopes to eventually start holding adult swim lessons, aqua aerobics and more. Garza said that they may even be able to host these programs during the regular school year, if scheduling permits it.

Along with the water park and natatorium, the planetarium has also been made open to the public with limited showings of educational documentaries and films so they can serve both athletic and academic needs. This Wednesday, they had their first two screenings of Dynamic Earth and Oasis in Space.

The next screenings will take place June 29 and July 11 at 10 a.m. and 4 p.m. The matinees have limited seating, and the $3 admission will include arts and crafts for families before the films are shown.

“We do the hands-on activity, it&rsquo;ll be painting or coloring, arts and crafts,&rdquo; Garza said. “We&rsquo;ll also have the Ford NGL [Next Generation Learning] in conjunction with the migrant department, there will be a rocket launching camp through La Joya ISD, and we&rsquo;re going to be hosting that here.&rdquo;

Garza hopes the complex as a whole gives families in the area a chance to experience a fun day at a reasonable cost.

“All they need to do is come out and bring their sunscreen and enjoy a day at the park,&rdquo; Garza said. “These are opportunities given to the students and their families that perhaps they would not get even traveling to the island, Schlitterbahn and such. And more importantly, those same opportunities are family-oriented and inexpensive at the same time.&rdquo;

Parents of La Joya students can register their children for classes at the Sports & Learning Complex, or call (956) 323-2148 for more information about the water park and facilities.