With a severe lack of representation of Hispanic women in the workforce, a career readiness program in the City of Mission hopes to change that by empowering high school girls in the city.

That’s according to Cristina Garza, the programs director for Mission Economic Development Corporation. 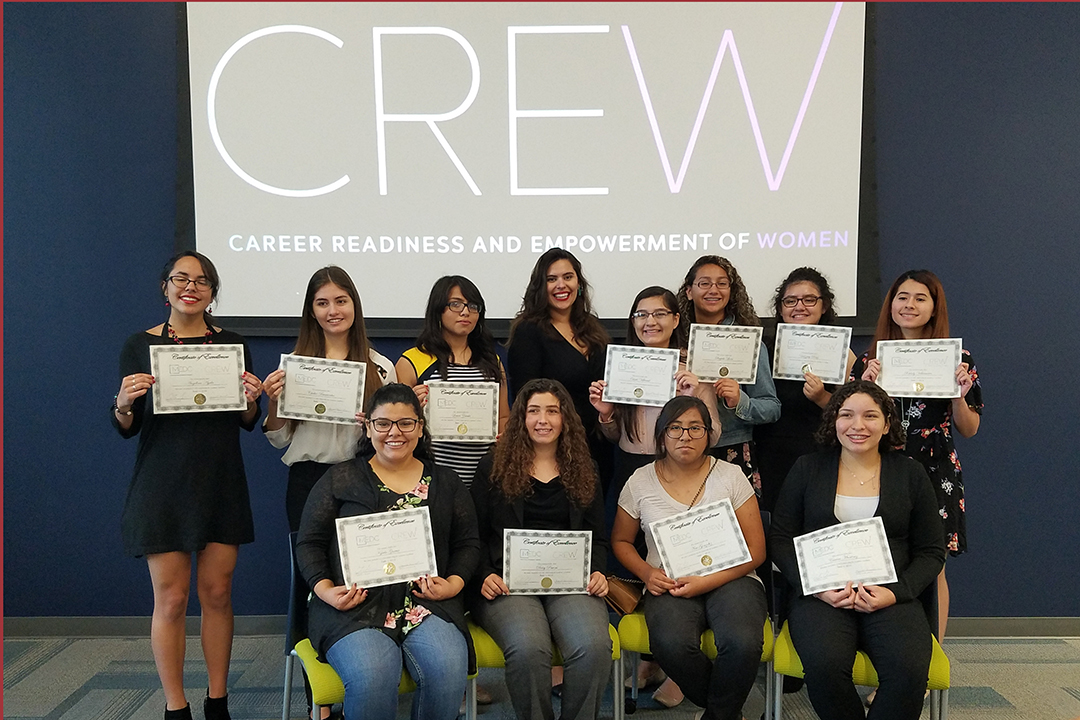 “Hispanic women make less than two percent of the workforce in technology and we still have a hard time recruiting women to [corporate] level positions,&rdquo; Garza said. “The reality is, there&rsquo;s been countless studies that show when women are supported and allowed to create wealth for themselves, cities do better…The more possibilities you give people to have financial mobility, the more they are able to give back to their community in return. It&rsquo;s a cycle that everyone benefits from.&rdquo;

To jumpstart this financial mobility, Garza created the year-long internship program Career Readiness and Empowerment of Women, or CREW. As part of this program, 11 female students from Mission CISD&rsquo;s T-STEM Early College High School and Mission Collegiate High School were selected to participate in a year-long internship program where they learned the soft and technical skills needed to succeed in the Entrepreneurship and STEAM fields of science, technology, engineering, art, and mathematics.

The intern&rsquo;s last day of the program was Friday, June 1 when each intern presented to the class their presentations on business ideas they had as well as a website each intern built from scratch for their proposed business.

“We&rsquo;ve done a lot of career development doing resume workshops, cover letter writing workshops and every week we&rsquo;ve had a speaker-a successful woman in the STEAM field-sharing their experiences to these teens,&rdquo; Garza said.

Angelina Ayala, the creator of Guiding Light, said she benefited a lot from the program and hopes to revisit her website within three years to implement it outside a class setting.

“I was shy at the beginning, but one of the things we went over is public speaking and other skills that helped me be more outspoken,&rdquo; Ayala said. “It&rsquo;s very important for more women to know this and have their own voice in any job they take.&rdquo;

Laura Zavala, an incoming senior at Mission Collegiate High School, presented to her cohort the organization Lady City. Lady City, she explained, is a career development program that she hopes will increase female employment in the Valley.

“The idea started at CREW where I was given the knowledge that women face a lot of barriers in the workforce and I had no idea these existed,&rdquo; Zavala said. “Whenever I&rsquo;d research a specific career, I wouldn&rsquo;t run across things such as the wage gap and the glass ceiling and I didn&rsquo;t have many people to warn me about these issues until recently. Now I want to help the women in the Valley deal with these issues as they find a career.&rdquo;

Zavala said she will more than likely revisit Lady City in a few years as Team No Sleep, a McAllen-based startup company, reached out to her to buy the project from her.

“They reached out to me via social media and were really impressed with it, but I had to explain to them it was a school project and not an actual career project,&rdquo; she said. “I can probably make it get off the ground once I graduate, I can see myself heading this project and developing it more.&rdquo;

At the end of their presentations, Garza surprised each of the interns letting them know they would each be awarded with a $1,000.

“I want these students to gain confidence and understand that they are capable of doing anything they want,&rdquo; Garza said. “Many of them are scared of the idea of doing a business plan, speaking in public, and yet these projects were meant not just to learn what it&rsquo;s like to run an organization, but also to understand that they can do it.