McALLEN – During the first break for his team, Mission Mustangs football assistant coach Omar Trujillo walked onto the field and brought the team over.

“You think you have this one in the bag,” he yelled. “You think it’s going to be easy and you already won it? Well, go out there now and do it.” 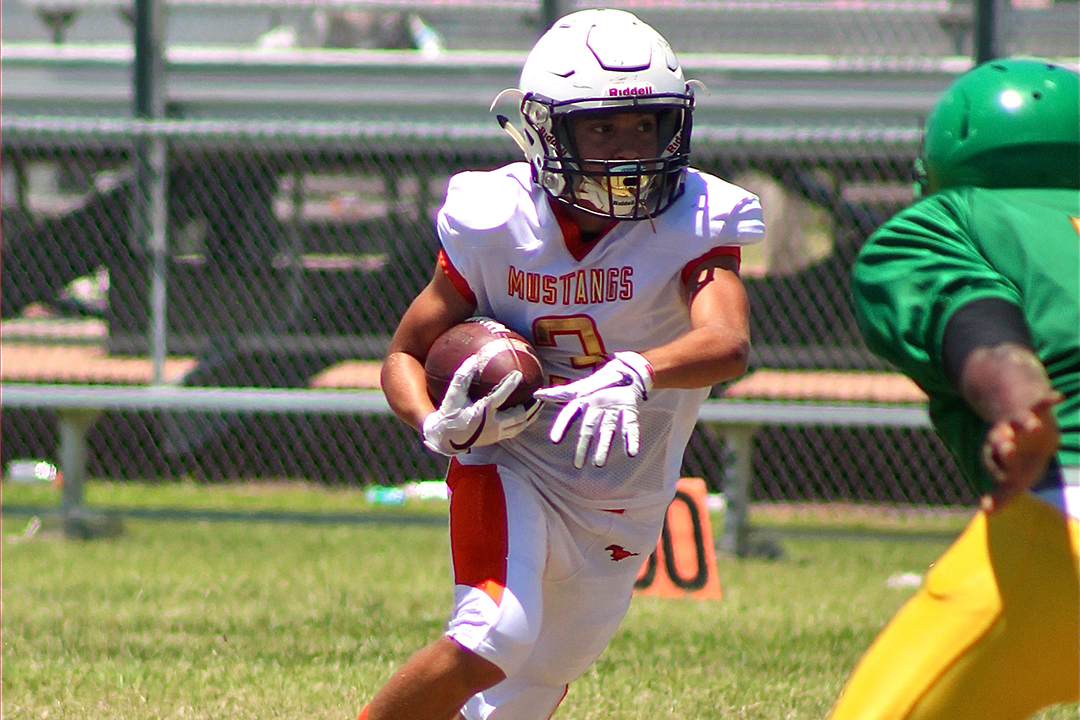 It was during the first series of the Texas Youth Football Association Spring Bowl Championship and the Mustangs were heavily favored against the Southside Colts out of Houston.

More than 30 teams from around Texas came to participate in the annual championship recently, one of two the association holds each year, the other being in the fall.

The TYFA has chapters in Austin, El Paso, Houston, Killeen, San Antonio, West Texas and the Valley. This year’s spring championship was held at the McAllen Sports Complex.

Following Trujillo’s words, the Mustangs did exactly what they set out to do, scoring on the first drive and on three more drives in the first half alone. With temperatures at 100 degrees or higher for the second straight day, and a long trip back, Southside forfeited before the second half began and the Mustangs won the senior division title, their third spring title in the past four years.

“We play as a unit and we make sure everybody is accountable,” Trujillo said. “We will hold our kids more accountable than some of the high schools. Even after they have left us and gone to play high school if we see them not acting in what we believe is an appropriate manner, we’ll call them out on it.”

The association has different age groups divided into divisions. The Mustangs, with eighth-graders, fill the roster with players from Mission, PSJA, Harlingen and even a couple of Brownsville schools. Other TYFA Valley teams that competed in the spring championships came from Harlingen and Pharr.

Most of the Mustangs have been together for as many as six or seven years.

“The RGV doesn’t compete too much in the fall, because it interferes with junior high sports and for us to stay in the good graces and not take players while teams are building their players, our teams don’t participate.” Trujillo said. “But we’ve dominated the spring with these kids.

“They have been building this team since they were 6 or 7 and when we first started they would get scared when they would hear teams coming from the big cities. But when you play them enough you realize that bigger, stronger or faster doesn’t always matter when it comes to team play versus individual play.”

Late in the half, Mustangs’ player Aiden DeLeon had a severe injury to his leg and had to be taken off the field and to a nearby hospital. It dampened the sprits on a day the Mustangs dominated. They also had easy wins on Saturday over the RGV Wolfpack and Houston 713 Cardinals.
Trujillo said that the team is not only loaded with talent that will make noise at their respective schools, but that it comes down to chemistry and all the years they have been together.

“They trained since they were in first or second grade
and know what’s expected – when a coach talks, you listen,” he said. “That’s the way it has always been.”
Trujillo remembered a game where he needed a player to run in and substitute but when he called for him, the player didn’t have his helmet on – he wasn’t ready.

“I ripped him,” he said. “It’s not acceptable. They are all representing our organization and we don’t take those things lightly. And just because they’re not with us doesn’t mean that they stop doing what they’ve learned. It’s about respect and being accountable. We instill that in all of them.”

The TYFA was founded in 1995 and according to its website states that its mission is to “provide young athletes with opportunities to compete and win at some of the highest levels of youth football and cheer in an environment free from discrimination and prepare these athletes for lifelong contributions to society; to embrace equality, academic achievement and diversity through competition of sport.”