Daniella Peña has been diligently preparing for her future since she was nine years old.

A member of the Veterans Memorial High School Class of 2018, Peña will be attending Cornell University in Ithaca, New York this fall. The eldest of three children, Peña aims to be a heart surgeon, a dream she has been working toward as long as she can remember. 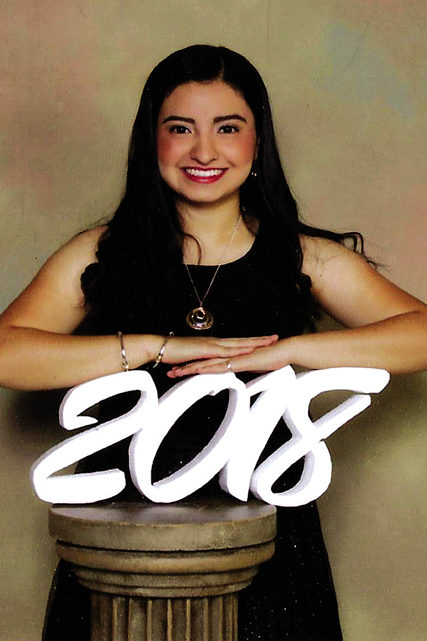 At the age of nine, Pe&ntilde;a found herself unsatisfied with cartoons and television aimed toward children. After her discovery of Mystery Diagnosis, a medical documentary drama series in which patients who cannot find a proper diagnosis for their ailments search for and find doctors who can discover what their rare medical condition is, Pe&ntilde;a was hooked.

“I remember watching that and thinking wow, I want to be a doctor, but I don&rsquo;t want to be like the doctors on that show that don&rsquo;t know what they [the patients] have, I want to be able to help people all the time, not just most of the time,&rdquo; Pe&ntilde;a said. “So I started keeping a journal, and each show I would watch I would record the symptoms, the diseases they would be mistaken for, and what it really was and the survival rates.&rdquo;

Looking back at her journal, which she kept in order to have a reference point to consult if she was ever unsure of an ailment, she smiled at the misspelled words and was proud to see how far she had come.

Pe&ntilde;a&rsquo;s decision to journey into the medical field was solidified in the fifth grade, when she was diagnosed with a cardiac arrhythmia and her family could not find a surgeon in the Rio Grande Valley who could perform the necessary procedure. After travelling to Nashville for treatment, Pe&ntilde;a&rsquo;s passion for medicine grew even stronger.

“Eventually, way down the line, once I&rsquo;m already a heart surgeon, I plan on coming back and hopefully starting my own practice,&rdquo; Pe&ntilde;a said. “So I can provide the service I wasn&rsquo;t able to have when I needed it to the people here.&rdquo;

Pe&ntilde;a began volunteering at Mission Regional Hospital and McAllen Heart Hospital her sophomore year of high school, doing service work she is drawn to. She will be attending Cornell as a Cornell Tradition Fellow, and will have the opportunity to participate in service-oriented projects and make the most of her time in college.

“There&rsquo;s a lot of benefits to it,&rdquo; Pe&ntilde;a said. “One of them is they fund for you to go somewhere and do a service project, an internship, so that&rsquo;s exciting.&rdquo;

Academically inclined thanks to the motivation of her grandparents and parents, Pe&ntilde;a credits her family for driving her the most toward success. Her grandparents moved to the United States from Mexico in order to give their children better opportunities, and education was their top priority.

“My grandparents never got the opportunity to even finish elementary school,&rdquo; Pe&ntilde;a said. “So they always pushed that for their children. My mother was the first to finish high school and go on to college. She encouraged her six younger siblings to do the same, and they all went on to earn a degree. I owe all my success to them, they&rsquo;ve always encouraged me, and without them I wouldn&rsquo;t be here today.&rdquo;

For the student who considers a 94 a bad grade, Pe&ntilde;a is most looking forward to the rigorous workload Cornell has to offer during the pursuit of her undergraduate degree. She knows going out there and pursuing the world will prepare her for medical school.

“I&rsquo;m hoping it will be challenging and I&rsquo;ll learn a lot,&rdquo; Pe&ntilde;a said. “And I&rsquo;ll be prepared for medical school and the rest of my life.&rdquo;

While she looks forward to continuing her academic career, setting a good example and modelling high expectations for her entire family, Pe&ntilde;a will miss her parents and siblings more than anything.

“Even though we fight and they drive me crazy sometimes, I tuck them in every night [her brother and sister],&rdquo; Pe&ntilde;a said. “They can&rsquo;t sleep without it. And sometimes we sing together, there are certain songs that we like, and we laugh. My mom, for this whole past year, she&rsquo;s been stressed. She hasn&rsquo;t cried, she&rsquo;s strong, but I know she probably will once we&rsquo;re over there and they&rsquo;re dropping me off.&rdquo;

Someone who loves math, this summer Pe&ntilde;a will be helping her younger brother&rsquo;s teacher prepare him and other students with pre-algebra so they can take algebra during the school year. She also recently got her pharmacy technician certification, and is currently applying for a full-time summer job as a pharmacy tech.

“My plan is to go and make the most of it,&rdquo; Pe&ntilde;a said. “Go to the best schools I can, to get the best preparation. It&rsquo;s a long journey, it&rsquo;s 16 years in total of education, but I think if you have a passion for it, and that&rsquo;s what you know you really want to do for the rest of your life, you should go for it. As the saying goes, you&rsquo;ll never work a day in your life if you do what
you love.&rdquo;