Hoping to motivate and facilitate better communication skills between children and parents, the Fathers’ Engagement Summit touched on various topics aimed at educating those willing to learn.

Put on by the La Joya Independent School District, the LJISD Police Department First Offender Program, the Alliance for Drug Abuse Prevention (ADAP) Coalition and Behavioral Health Solutions, the event took place at the planetarium in the LJISD Sports and Learning Complex, located at 1801 Western Rd in Mission. The summit was free for all to attend, and while it was named the Fathers’ Summit, mothers and legal guardians were also present. 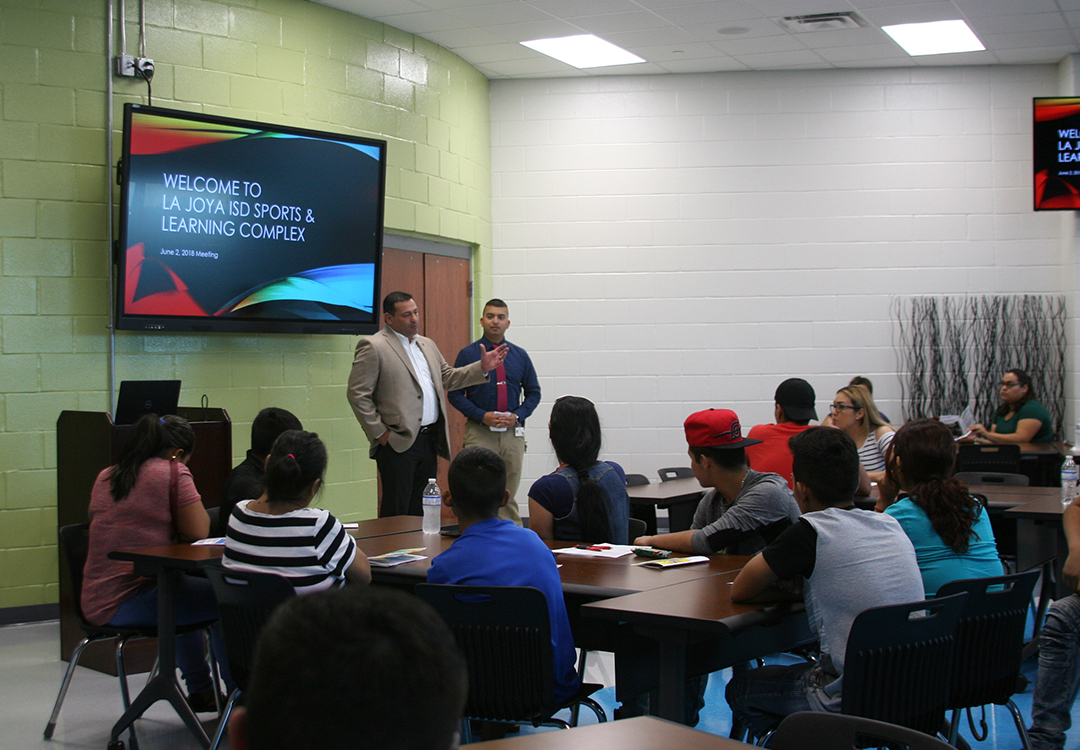 “An event like this is designed to encourage interaction, and reestablish the trust that household has,” said First Offender Specialist David L. Torres, who helped organize the program and summit.”

The First Offender Program, active for the last three years, allows students who have one criminal offense on their record an opportunity to have it permanently removed from their records and destroyed, in an effort to start over. Since its inception three years ago, about 130 students have graduated from the La Joya program.

“We are the first ISD police department in the state of Texas to have such a program,” Torres said. “All of our curriculum is designed for both the student and the parent, because we believe that change has to come not only from the student themselves, everybody makes mistakes, but we want to make sure that we change the communication and the interactions between them and the parent.”

The summit touched on topics such as substance abuse, mental health awareness, communication practices, journeys to recovery and how to become a better role model to children. The speakers present represented the Texas Rangers, the University of Texas Rio Grande Valley, Behavioral Health Solutions and Vital Church.

“A lot of the parents may not know how to discipline, or know how to communicate,” Torres said. “Or they’re stuck in a social norm that’s not as progressive, so to speak. What this will allow them to do is take a new point of view back and try new things back at home to reestablish trust and communication.”

“It’s been highly effective,” Torres said. “We’ve definitely seen a change in the student population, we’ve seen parents that are very grateful, we’ve had kids who have gone on to be star athletes with La Joya. We’ve had kids who are in the early colleges, the different academies that we have, they do very well for themselves.”

Rudy Rodriguez, the ADAP Coalition Coordinator, was also present at the event, and was glad that La Joya ISD was putting it on for families.

“We’re hoping to connect fathers and father figures or anyone who is a parental role model with children and keep that connectivity in the home, and in the schools,” Rodriguez said.

Torres also said that the role of the father figure is very important in child development, but noted that several mothers were present and capable of becoming that model of good communication and positive influence in their children’s lives. Ricardo Rivera, a retired lieutenant from the Texas Rangers, spoke about the legal ramifications of drug misuse in minors and the negative effects bad decisions can have in an individual’s life and the people around them.

“You need to think about the decisions you are making,” Rivera said, addressing the room of parents and their children. “Because sometimes it doesn’t only affect one person. Think about that.”

Torres said that the chance for parents to meet with and ask questions about behavior and positive development doesn’t happen very often.

“They may not have the opportunity to interact with somebody who might have a PhD (Doctor of Philosophy) or from a college or university, or somebody like a retired Texas Ranger,” Torres said. “We want to bring in the highest grade speakers we can to ensure that they have the best information possible.”

Torres also said that the summit was preventative, and they hoped to arm parents with knowledge that would preemptively save their children from even having to enter the First Offender Program.

“Sometimes we’re dealing with kids that people have already given up on them,” Torres said. “We like to welcome that challenge and show those people that just because somebody made a mistake in life, doesn’t mean they can’t learn from it and they can’t be successful.”