Revitalizing the high school campus environment and aiming to ensure the new buildings are of the highest quality, the Mission Consolidated Independent School District is almost finished with a construction project almost three years in the making.

In the June 8, 1988 issue of the Progress Times newspaper, one of the top stories happened to be about student growth requiring the MCISD to shift some of their portable classrooms to some campuses in order to meet the demands of the expanding school district. Now, 30 years later, Phase Three of the Mission High School Renovations Project is approaching completion, and the district is still growing. 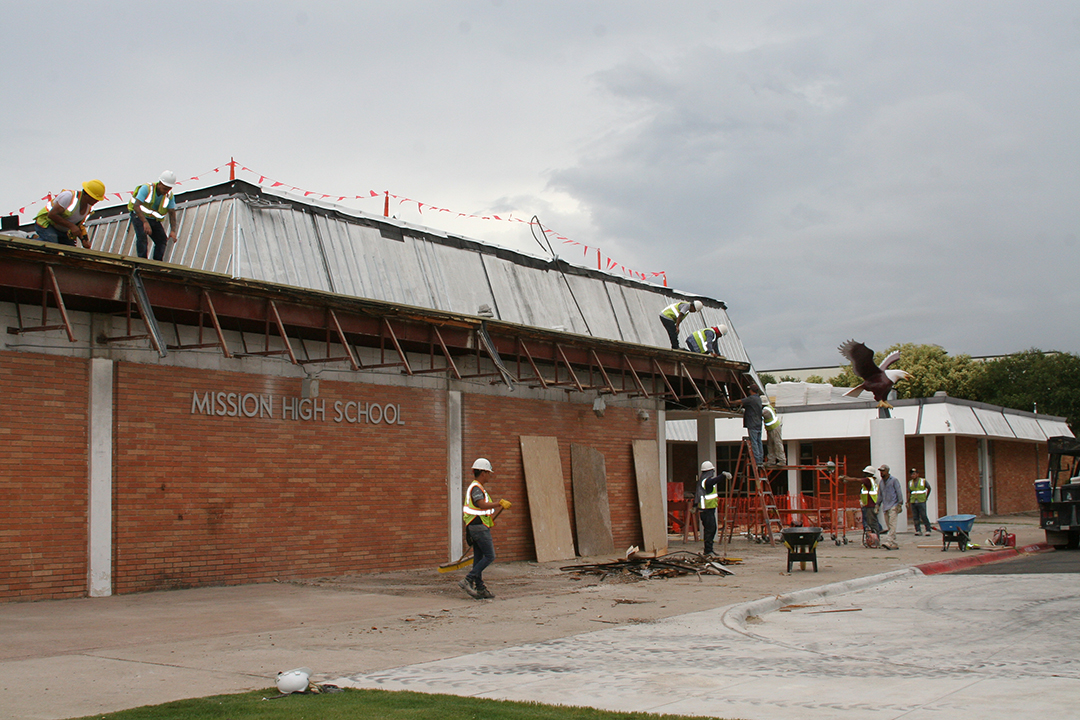 “What&rsquo;s going to be kind of amazing in a way, is even when the school year starts, they&rsquo;re still going to need portables at this campus,&rdquo; Craig Verley, MCISD Director of Public Relations and Marketing, said. “Because the campus has grown since this project was initialized, they won&rsquo;t be using as many as they are now.&rdquo;

The MHS Renovations Project, designed by PBK Architects with Econ Construction as the contractor, has allowed the campus to undergo a major change, making it more accessible, modern and inviting as well as giving the school a more collegiate feel. One of the biggest additions is the new cafeteria, which will be able to fit about 1,000 students at a time.

“That&rsquo;s one of the things that students have really been looking forward to, is the new cafeteria,&rdquo; Verley said. “The seniors [Class of 2018] did get to eat there once before they graduated, one lunch after their graduation practice, because they really had to put up with a lot.&rdquo;

Nicknamed the “class of construction&rdquo; by principal Edilberto Flores, the Class of 2018 experienced almost three years of going to a high school that was largely a construction site. With roughly 2,300 students and 250 faculty members, the old cafeteria was not adequate for the large campus.

“They&rsquo;ll have many more serving lines than they&rsquo;ve had before,&rdquo; Verley said. “This will be the second kitchen that we&rsquo;ve done that will be a cooking kitchen. Most everything that will be served here will be cooked here. They&rsquo;ll even have an omelet station for breakfast. When they planned out the furnishings for it, they wanted to make it as much like a college cafeteria as they could.&rdquo;

Throughout the construction period, students were having to eat lunch at various locations on campus, including the library and practice gym. While it was ongoing, students and faculty also had to maneuver their way around a large portion of the middle of the MHS grounds.

“Now they&rsquo;ll be able to cut through the center,&rdquo; Verley said. “There was a lot of leniency [in terms of the time students had to get to class during passing periods] last year. I&rsquo;m guessing they&rsquo;ll be tightening up on that this year.&rdquo;

Mission High School will also now hold a Fine Arts Building, a two-story space separate from their Performing Arts Building in which the band, choir, dance and mariachi will have their own room to practice.

The project also included the reconstruction of the Agriculture building. The shop area, where welding is taught, previously did not have air conditioning.

“The Mission FFA [Future Farmers of America] Program is actually one of the biggest ones in the Valley,&rdquo; Verley said.

The front office and visitor parking area have also been reconstructed. For parents and visitors going to MHS, the entrance at Cleo Dawson Road will lead them straight to the new front.

“Access to the whole campus is going to be much more controlled,&rdquo; Verley said.

When the 2018-2019 school year begins, students will have access to the new facilities, free of construction, as well as new desks and chairs designed specifically for easier mobility when moved for group work.