Salinas had traveled to Phoenix for the National Association of Latino Elected and Appointed Officials conference, but the Rio Grande Valley still dominated the news. 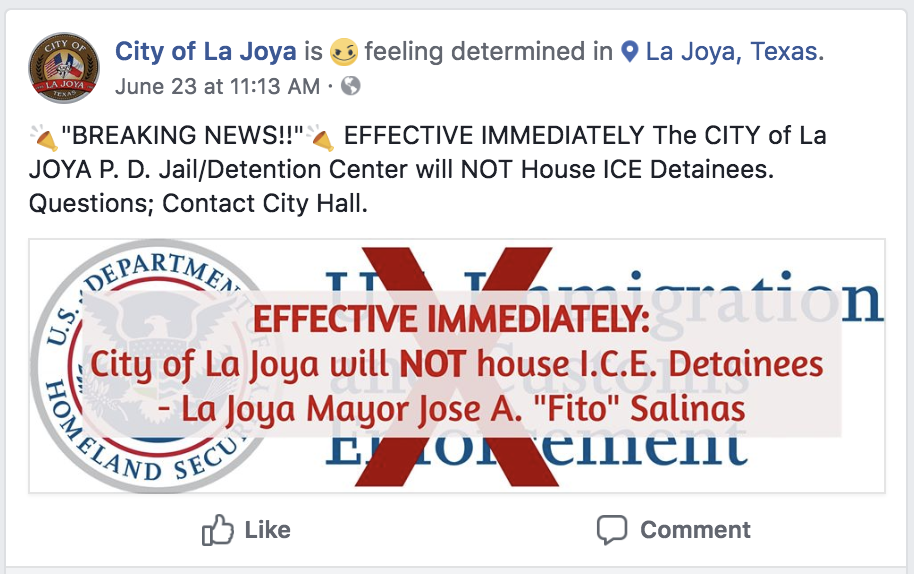 Migrant children waited in Border Patrol processing centers, separated from their parents and surrounded by chain-link fences. Toddlers had been taken from their mothers and sent to shelters. And someone had leaked audio of the children crying.

He had to act.

“I was very, very upset with what they’re doing, separating families,” said Salinas, 79, a veteran of civil rights struggles in South Texas. “And so we’re not going to detain anybody there in La Joya for them.”

Nearly a week later, though, what the announcement actually means remains unclear.

Alaniz and Arriaga declined to comment on the announcement, referring interview requests to Salinas.

The city jail, which consists of two temporary holding cells, doesn’t actually “house” detainees for U.S. Immigration and Customs Enforcement — or any other agency.

However, police do comply with federal immigration detainers. Failure to comply would jeopardize grant funding and violate state law.

Anyone with a more serious charge is transported to the Hidalgo County jail for booking.

Many days, the jail is empty, Gonzalez said. When someone is detained, the federal immigration officer attempts to verify whether or not that person is legally present in the United States. ICE places an immigration detainer on anyone without legal status.

Police release people arrested on Class C misdemeanors directly from the city jail. People with immigration detainers, though, aren’t released. They normally remain in custody until ICE picks them up.

Salinas said La Joya will no longer hold people after the underlying criminal case is completed.

“We’re not going to keep them after they’ve been released by our police department,” Salinas said, adding that local police shouldn’t enforce federal immigration law. “That’s not our job. Why should we be doing that?”

News about migrant children being separated from their parents convinced Salinas that La Joya shouldn’t cooperate with ICE.

Salinas said he viewed the “zero tolerance” immigration policy, which separated children from their parents, as part of a long history of racial discrimination.

“In 1954, I was thrown out of a restaurant in Lubbock, Texas,” Salinas said. “Because we were migrants. Because we were Mexicans. We had to eat outside.”

The memory stuck with Salinas, who joined the Raza Unida party and fought discrimination against Mexican-Americans wherever he went.

When he retired, Salinas served on the La Joya school board and later ran for mayor. On immigration and civil rights issues, he’s among the most outspoken mayors in the Rio Grande Valley.

“I’ve been through all of that,” Salinas said, referring to discrimination against Mexican-Americans. “Nobody’s told me about it. I’ve been there.”

Refusing to cooperate with ICE is the right thing to do, Salinas said, adding that La Joya shouldn’t be forced to handle federal immigration issues.

“They’ve got to prove it to me that I’m wrong,” Salinas said.

Failing to comply with immigration detainers could cause serious problems for La Joya.

The Texas Governor’s Office requires all Homeland Security Grants Division applicants to comply with immigration detainers. Any agency that fails to comply may be removed from the program and required to return the grant funding.

Without the overtime hours, local police officers would take a major pay cut.

Arriaga worked more than 450 hours of Operation Stonegarden and Operation Border Star overtime last year, according to city records. The city paid him nearly $11,700 for the border security assignments — more than 20 percent of the total amount Arriaga earned last year.

Many police officers, who earn just $14 per hour, depend on grant-funded overtime to make ends meet.

“If they don’t want to give us the grant, fine,” Salinas said, adding later: “And if any of our police officers don’t want to work with us because we don’t have Stonegarden, so be it. They can leave. They can go somewhere else.”

Along with jeopardizing grant funding, adopting a policy that prohibits the city jail from complying with immigration detainers would break state law, according to guidelines published by the Texas Attorney General’s Office.

Asked about the city’s announcement, a spokeswoman said the Attorney General’s Office doesn’t comment on investigations.

Salinas said he didn’t know the details about immigration detainers, but maintained the city wouldn’t cooperate with ICE.

“Whatever happens, happens,” Salinas said. “But I feel I’m right.”