The services were available from June 16-20, and included medical screening and general exams, dental exams and extractions, optometry screenings and prescriptions and nutrition counseling. Nuestra Clinica Del Valle was also onsite to assist patients requiring follow-up care and enrollment into their system. 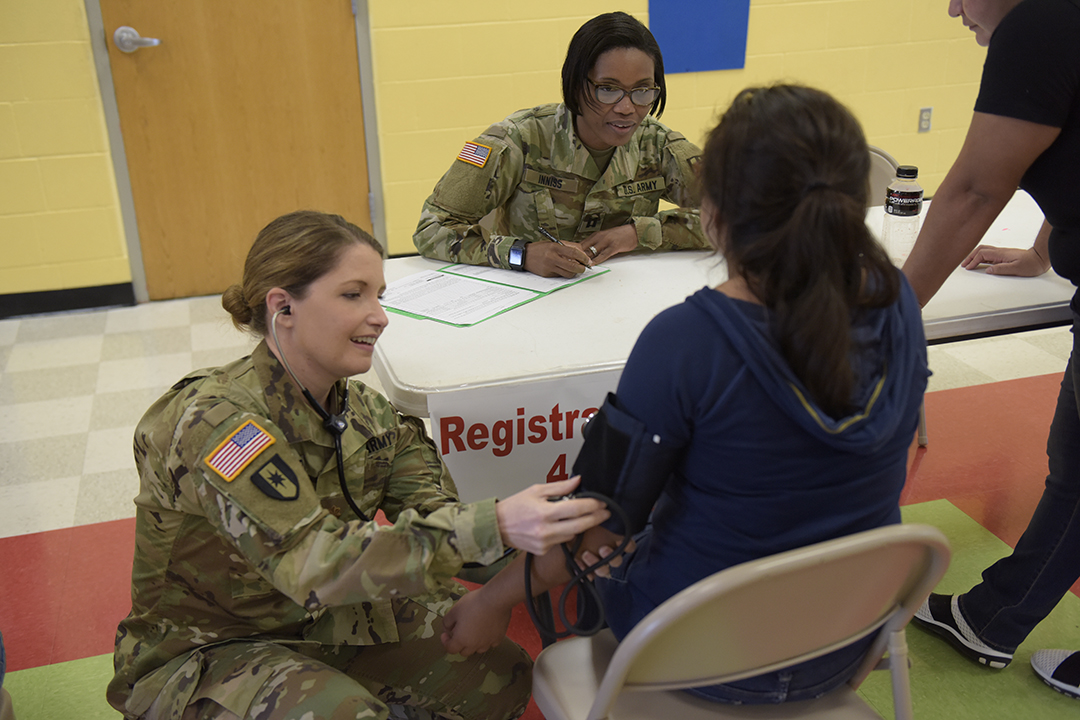 Dr. Armando O&rsquo;ca&ntilde;a, newly elected Mayor of Mission, was present at the event as he is still employed with the school district as the Emergency Operational Coordinator.
He was thankful and excited that the U.S. Army chose La Joya ISD as one of the stops they made during their IRT trip in the Rio Grande Valley.

“They provide the services to get ready in case they get deployed, and they have to set up in the field,&rdquo; O&rsquo;ca&ntilde;a said. “They&rsquo;re getting practice and training at this school.&rdquo;

According to O&rsquo;ca&ntilde;a, the students zoned at Clinton Elementary are from the lowest economically developed section of the LJISD, which is why the school was chosen. While the free clinic was available every day, attendance was somewhat low.

“From the day we opened, it has been increasing gradually,&rdquo; said O&rsquo;ca&ntilde;a. “However, there was a crack-down by ICE [U.S. Immigration and Customs Enforcement]. They did a 50-unit pick-up three days before we opened, so the community right now is a little low in trusting people in uniform.&rdquo;

This is the first time the IRT has taken place in the LJISD. This is a separate event from Operation Lone Star, another medical training program that offers free health services in the Valley in July.

Also present at the IRT in La Joya was Brigadier General John Hashem, the Deputy Commanding General for Support of Army North and the Army Reserve and Engagement Cell Director, who has overseen several of these operations across the country. He stressed that the Initiative Readiness Training program is not affiliated with the Border Patrol or ICE.

“This has nothing to do with the National Guard on the border, or all that&rsquo;s going on right now,&rdquo; Hashem said. “It&rsquo;s really important to mention that, this is entirely separate, we&rsquo;ve done these for the last couple of years in communities along the southwest border in Texas, and we will continue to do them.&rdquo;

Army North is the lead Department of Defense organization that gets tasked by U.S. Northern Command to provide defense support of civil authorities. If there is a natural or man-made disaster, and the local and state response are overwhelmed, FEMA (Federal Emergency Management Agency) and the Department of Defense is asked to provide capabilities.

“One of the ways we train and keep our skills going is to perform defense support of civil authorities when there is no disaster,&rdquo; Hashem said. “This allows us to keep our strength in working for communities.&rdquo;

The U.S. Army Reserve, Army North and Texas A&M University made an agreement to work in the colonias along the southern border in communities that may be lacking in some essential services.

“It allows us to come to communities in the United States and do our mission sets to help us prepare,&rdquo; Hashem said. “Why do we have hospitals in the Army and the military? Because we are training for war. We practice by running hospitals in the U.S. It&rsquo;s the same thing here, we practice by doing things.&rdquo;

Hashem said that they have also done Initiative Readiness Trainings in other countries, but see the major benefit of assisting communities in the United States.

“The bulk of forces that come and do these are reserve components,&rdquo; Hashem said. “These are my brethren, the Army Reserve, doing this on their annual training period. So instead of going somewhere else to perform their training, they&rsquo;re right here in a U.S. community doing their skills and keeping them sharp as a unit.&rdquo;

The brigadier general mentioned that the Clinton Elementary site had a lot of volunteers, more than some of the much bigger sites they set up in before, which is “absolutely fantastic.&rdquo; He said this experience is beneficial to all those who are able to utilize these services.

“This is great,&rdquo; Hashem said. “It doesn&rsquo;t cost anything except the trip to get over here.&rdquo;

Lieutenant Colonel Commander Arve Alexander Wikstrom, who oversaw this operation for the duration of their RGV programs, was also able to speak about the program and response from the public.

“As the general said, we&rsquo;re very impressed with the volunteers we&rsquo;ve had in the community,&rdquo; Wikstrom said. “We&rsquo;d like to have more people come in, because the mission is to make the world a better place. The more we serve, the more we do.&rdquo;

Wikstrom also recognized the importance of providing these services to underprivileged and economically disadvantaged communities.

“It&rsquo;s no secret that the marginalized people in our society need these types of services and they can&rsquo;t afford dental, vision or medical care,&rdquo; Wikstrom said. “We can provide this free of cost.&rdquo;

According to O&rsquo;ca&ntilde;a, the LJISD was extremely thankful to be selected and the community was grateful.