With an estimated $100 million in damages, more than 2,000 homes flooded and nearly 1,000 people rescued during last week’s floods, Hidalgo County is getting to begin the process of rebuilding. 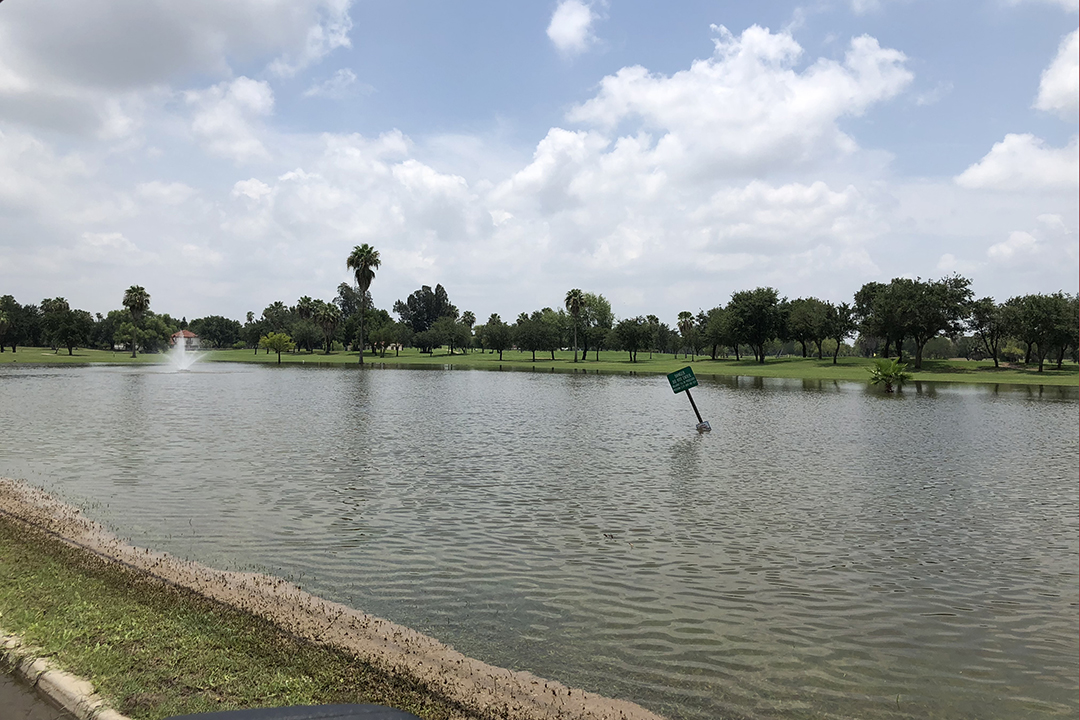 “We do not have FEMA assistance yet,&rdquo; Eddie Olivarez, director for Hidalgo County Health Services said Wednesday. “Currently FEMA is doing a preliminary damage assessment to the area now that the governor feels that Hidalgo and Cameron county meet the $38 million guidance that the federal government requires to receive FEMA funds. Those estimates may be higher than that.&rdquo;

According to the FEMA website, there exists two types of assistance they provide. One is a grant for public entities such as cities, counties and school districts that they receive if the affected area receives at least $38 million worth in damages.

The other form of assistance is a grant given to individual homeowners where they can receive up to $33,000 in assistance.

“The governor has sent a letter to the president encouraging him to sign off and declare an emergency in the county,&rdquo; Olivarez said. “It could take a few days or weeks for that to happen. If and when it happens there will be centers set up for people to go and file a claim with FEMA. It&rsquo;s not happening yet.&rdquo;

Until then, Olivarez recommends that people take photos and video of any property damage before they clean it up, save all repair receipts, document all damaged items and throw away flood-damaged items that pose a health risk.

“The entire area was tremendously affected within a 48-hour period,&rdquo; Olivarez said. “That&rsquo;s a lot of water in a short amount of time.&rdquo;

MISSION
The City of Mission was hit with seven inches of rain in the first four hours. They opened their Parks and Recreation Department as shelter for people who had been evacuated, and also allowed the Salvation Army, Mission Consolidated Independent School District and city officials to open Veterans Memorial High School as a more permanent shelter Thursday evening.

At a press briefing held Monday, Mayor Armando O&rsquo;ca&ntilde;a and City Manager Martin Garza, Jr. discussed the importance of reporting damages to the city, so the city could then report the total cost to the Federal Emergency Management Agency (FEMA). According to Garza, O&rsquo;ca&ntilde;a signed a proclamation claiming Mission as a disaster area in Hidalgo County, which was signed by Judge Ramon Garcia and Governor Greg Abbott.

“We&rsquo;re looking at five different counties that were involved in this devastation,&rdquo; Garza said. “These five counties need to meet a threshold in order for FEMA to be activated.&rdquo;

A threshold of at least $38 million needs to be reached so FEMA can take action. Garza said it is vital that people report the interior and exterior damages of their homes, property and assets to Mission so everyone can be accounted for.

“The City of Mission, through the assistance of our council and Mayor O&rsquo;ca&ntilde;a, is putting out a live page [on the main City of Mission website] that reads up at the front ‘June Flood Assessment,&rsquo;&rdquo; Garza said. “In that form, you&rsquo;re going to be able to provide information that is pertinent to us and to be able to have the estimated cost to provide to FEMA.&rdquo;

The forms are directly overseen by the city, and contain questions that FEMA will be asking. O&rsquo;ca&ntilde;a stressed that Mission residents needed to complete these forms so everyone could receive the help they need.

“The importance of this form is that it will give us a basic general idea about the total damages from Thursday to now,&rdquo; O&rsquo;ca&ntilde;a said. “It is also a tool we are going to use for future planning of our drainage system.&rdquo;

According to O&rsquo;ca&ntilde;a, 80 percent of the City of Mission was underwater at one point, but by lunchtime 70 percent of the city had drained completely. By filling out the form on the city website, officials will be able to make data-driven decisions.

“Obviously, we did experience major problems,&rdquo; O&rsquo;ca&ntilde;a said. “But those problems will be addressed, and we should have long-term drainage solutions for the citizens of Mission.&rdquo;

The rain was severe enough to cause several canals in the area to overflow, which lead to several families being evacuated from their homes. The city has taken steps toward further preparation and health awareness.

Garza said that Mission is always preparing for these events, and it is difficult to gain complete control in an emergency situation.

“This preparation happens throughout the year,&rdquo; Garza said. “This is a wake-up call for these five counties, to make sure we are working together with our residents so we can make sure we report the proper damages and get the proper authorities [FEMA] here to come and assist our families.&rdquo;

ALTON
For Rudy Garza, Public Works director for the city of Alton, last week&rsquo;s flood was “extraordinary&rdquo; for the area.

“I&rsquo;ve been here 11 years and I&rsquo;ve never seen anything like this,&rdquo; Garza said. “We had reports of seven and a half to 11 inches of rain in some areas. Alton was literally flooded in places that have never been flooded before.&rdquo;

Garza, who calls last week&rsquo;s event the “Great Alton flood of 2018,&rdquo; said streets along Inspiration and Trosper Roads were flooded and waters did not begin to subside until Sunday when the city was able to finish pumping out the water in the streets.

Emergency crews evacuated two families in those streets but besides that, the city handled the flood pretty well, Garza said.

“We cleared the disaster as fast as we could, things are moving up and hopefully we&rsquo;ll come up a lot better in the next emergency,&rdquo; Garza said.

Garza also urged citizens to help with the cleanup by not illegally dumping in undesignated areas as the debris could clog up the city&rsquo;s drainage system. Any debris in the city can be picked up by the city&rsquo;s trash service if the homeowner places their flood-damaged items directly in front of their property.

PALMHURST
Besides a few streets along Mile 3 being shut down for a few hours Thursday, Palmhurst Police Chief Mike Vela said there weren&rsquo;t any emergencies in Palmhurst.

“We weren&rsquo;t affected that much,&rdquo; Vela said. “All the streets between Mayberry and Conway on 3 Mile Line had to be closed for at least five hours.&rdquo;

“The city did very well in responding to the flood,&rdquo; Vela said. “We have a good rapport with our neighboring cities and the county and we got to work with them.&rdquo;

PALMVIEW
Sinkholes along Farm-to-Market Road 495 between Bentsen and Minnesota Roads have led to that street being closed to the public until further notice, Palmview Fire Chief Jerry Alaniz said.

“The storm created sinkholes in those streets that were involved with construction with our sewer project, so that&rsquo;s why we ordered evacuations in those streets,&rdquo; Alaniz said. “The water is so deep you can&rsquo;t see the sinkholes.&rdquo;

Alaniz reported that 10 people had to be evacuated from their homes last Wednesday due to the rising floodwaters in that area. However, all the areas that were flooded were pumped out by Sunday and the city is working to assess the damages, Alaniz said.

“If there&rsquo;s standing water in the area, get rid of it to prevent mosquitoes in the area,&rdquo; Alaniz urged citizens. “Make sure the grass is cut, dispose of any trash at the disposable bins at the Precinct 3 offices. Just bring your ID and proof of address.&rdquo;

PE&Ntilde;ITAS
The City of Pe&ntilde;itas also experienced heavy rainfall last week, particularly Thursday morning. According to City Manager Omar Romero, a few roads had to be closed due to sinkholes.

“The sinkholes were caused by recent construction that obviously was affected by the amount of water that fell,&rdquo; Romero said. “We were able to work with Precinct 3 and TxDOT [Texas Department of Transportation] to redirect traffic while the contractor came out, recompacted the area and repatched the road.&rdquo;

Romero credited the recent installment of drainage systems in the city through urban county projects for offsetting most of the severe impact of the rain on the streets and in the homes of Pe&ntilde;itas residents.
“The drainage systems worked very well to keep the water level low,&rdquo; Romero said. “I went and toured the drainage systems myself, and they are pretty full of water, hopefully over the course of the next few days some of that will recede as the water gets absorbed and drained out.&rdquo;

According to Romero, one home in Pe&ntilde;itas had trouble with water inside their home, but the family was able to relocate during the storm.

“They&rsquo;re disabled, and obviously it&rsquo;s harder to cope with cleaning and dealing with water inside their home,&rdquo; Romero said. “They relocated for a day or two and right now they&rsquo;re in the process of cleaning up and getting back to normal.&rdquo;

The Pe&ntilde;itas City Hall lost power for a bit, but other than those instances no major damage was done in the area.

LA JOYA
Despite providing sandbags to residents, City Administrator Mike Alaniz said the city only provided them as a precaution.

“We just had lots of water and a few broken trees, we were very fortunate,&rdquo; Alaniz said.

MOSQUITOES
According to Olivarez, the biggest health risk posed by the floodwater is the increase of mosquitoes, which he said will happen due to all the water from last week.

“However, there are 26 types of mosquitoes in the county and only three of them carry diseases such us Zika and dengue, “Olivarez said. “The county is taking preventative measures to protect the public and the public can participate.&rdquo;

The county, meanwhile, is taking steps to reduce the mosquito population by spreading larvicide in large bodies of standing water and spraying for mosquitoes.

Olivarez noted that spraying is the hardest step due to the county needing wind speeds under 10 miles per hour to effectively spray the area.

“Any people that want to help are also urged to contact the Rio Grande Valley Food Bank and ask what items they need and donate them,&rdquo; Olivarez said.