Teachers are the people who, beside parents, mold children into the people they will grow up to be.

The La Joya High School class of 1986 understands this and got together to commemorate their teachers at an event Wednesday where they unveiled two benches and a plaque at the high school’s entrance in honor of their teachers. 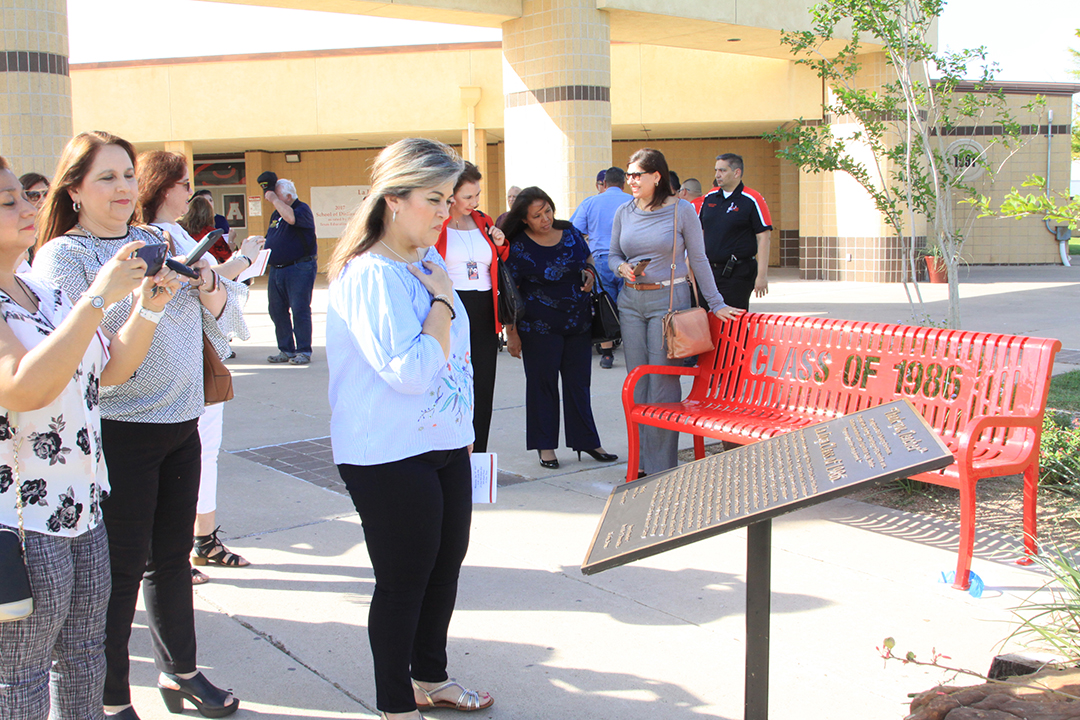 “This is for the teachers, those are the people who invest in our lives the most besides our parents,” Andy Gonzalez, president of the La Joya High School Class of 1986 Committee said at the event. “They’re the ones we spend most of our day with.”

Gonzalez, a social studies teacher at Lorenzo de Zavala Middle School, said the idea to honor the teachers came after the class’ 30th high school reunion in 2016, when the former classmates began hanging out more often and saw the La Joya Class of 1966 do a similar project for their classmates at the district’s central administration office.

This project, which has two benches and a plaque dedicated to the teachers and lists the classmates who donated to the project, reads the following: “You taught us to believe in the beauty of our dreams. With grateful hearts, we thank you for investing your life to transform ours. We dedicate these benches as a token of appreciation to you, teacher. Rest your weary feet and let us take up the torch.”

The La Joya alumni raised $7,000 for the project, of which $4,000 was used for the benches and plaque. Among the members of the graduating class were Roel Bermea, chief of police for the city of Peñitas and Anysia Treviño, La Joya ISD’s assistant superintendent for human resources.

“As a teacher, I now understand how it’s like to deal with students and several different personalities,” Gonzalez said. “I want to thank the teachers I had for having that same kind of patience they had for me that I now have for my students and their parents. They took their time and gave me good lessons not just in school but in life. Now I am a teacher and invest in the lives of my students just like they did.”

A portion of the remaining $3,000 raised to fund the project was used to distribute four $400 scholarships to La Joya High School graduating seniors, a fundraiser Gonzalez says the Class of 1986 hopes to continue doing.

Among the teachers in attendance at the event was English instructor Pat Garza, who has been teaching at the school for more than three decades.

“I just want to make sure no one comes up to me and say ‘Miss Garza, you were my grandma’s teacher” because then it’ll really be time to retire,” Garza joked to her former students. “You guys kept us young and motivated maybe that’s the reason why I still haven’t retired. Classes like yours, especially this class, made me know I was never going to leave La Joya. Now we’re getting your legacies. Your children are coming to us and we appreciate how our La Joya kids are sticking around and making sure your kids come here.”

Garza also praised her students for the benches and plaque.

“This is an outstanding group of kids so it shouldn’t be surprising they’d come up with something outstanding to give back to the school,” she said. “It’s wonderful.”