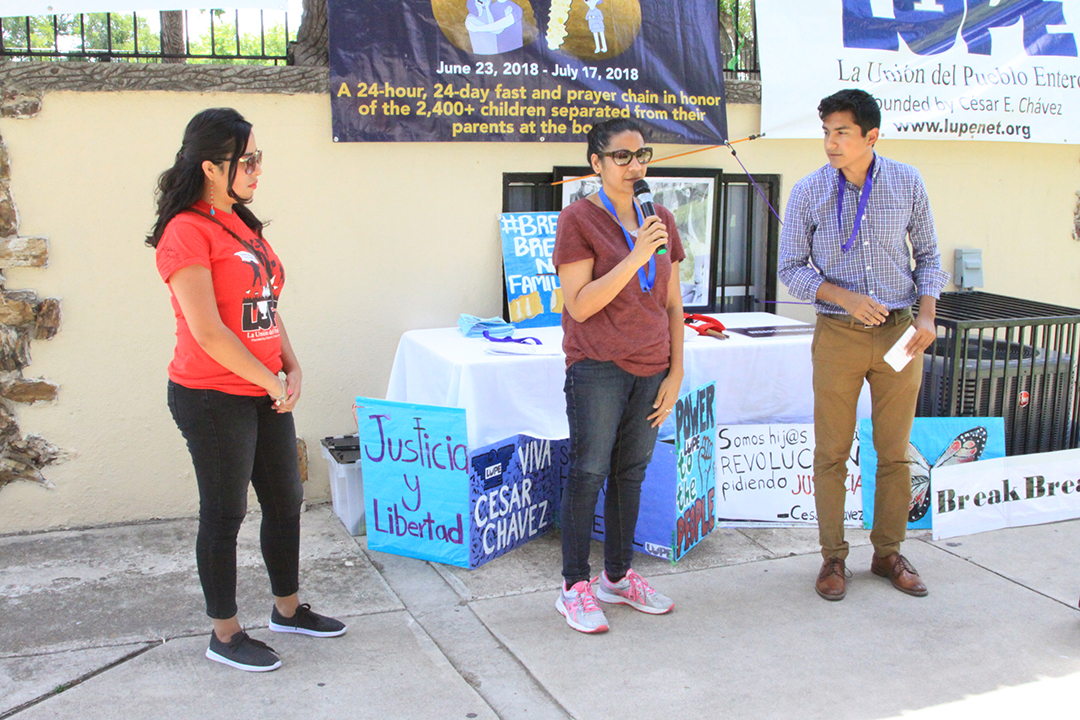 “It angers me, we’re a country of immigrants and it should not be like this,” Limon said of the federal government’s controversial policy that has separated over 2,700 children from their parents since last October through this past May as they cross the border illegally to seek asylum in the country.

The children are labeled as “unaccompanied minors” and sent to government custody or foster care while the parents are sent to jail to await trial for the misdemeanor charge of entering the country illegally.

“I have four kids, if this happened to me I’d go crazy,” Limon continued. “The most important thing for a mother is her own children and as a Mexican-American and a mother, it hurts to see families in distress like this.”

Limon made these comments Wednesday during the ongoing Break Bread Not Families hunger strike that started Sunday, June 24 and ends Tuesday, July 17. As part of this nonviolent strike, hosted by organizations such as the nonprofit La Union del Pueblo Entero, Texas Civil Rights Project and the Robert F. Kennedy Human Rights organization, participants come to McAllen’s Archer Park every day at noon for a prayer and to begin a 24-hour fast to protest the immigration policy.

200 people in total have participated in the fast in McAllen and are joined by thousands of people around the world, according to Abraham Diaz, LUPE’s education specialist. The fast in McAllen attracted social media buzz when celebrities such as the San Juan native comedian Cristela Alonzo and the Emmy-award nominated actress Evan Rachel Wood both appeared in McAllen to publicly start their fasts.

Even though participants only have to do a 24-hour fast, Limon has been fasting for five days. Despite admitting to feeling a bit weak, Limon was all smiles and enthusiastically discussed her fast.

“I have a doctor’s appointment tomorrow so depending on how that goes I’ll continue my fast,” Limon said, adding that she’s been living on a diet of water and juices during the fast. “To get through this I’ve focused on God and prayed for all those worried parents. I’m saddened by this injustice.”

MISSED DEADLINE
Also participating in the fast was Robert Lopez, a coordinator with the Texas Civil Rights Project. Lopez had fasted the day before and provide an update to participants regarding the family reunification process.

“The federal government promised that they set their goal to at least 55 families to be reunited with and they weren’t able to do that,” Lopez said. “For those kids, the trauma continues, the pain endures and every day they are enduring psychological stress from this separation. We do not have confidence that the government can meet their July 26 deadline simply because they couldn’t meet this minimal goal they set. We’re going to keep pushing to connect these parents with pro bono counseling to help them with their reunification process.”

“I kind of knew it would happen because there was a lot of confusion to track the families down but that just creates more anger for us because this situation gets messier the longer it stays there. We know this is not over and this will be a long fight for these families. We’re here to provide the decency lacking in the government.”

Veronica Gaona, a digital marketing specialist for LUPE, began her fast on Wednesday.

“I just want to stand in solidarity with everyone affected by this policy in the immigration community,” Gaona said. “As someone who came from immigrant parents, I feel like it’s my responsibility to be vocal about injustices in our community and ensure more families don’t endure more trauma.”

Gaona also expressed anger at the federal government’s missed deadline but hopes by fasting, she’ll be doing something in support of the separated families.

“I prepared for the fast by having a big breakfast to not get so hungry earlier,” Gamoa said. “If I get hungry I’ll just mentally take a step back and look at the big picture to remind myself why I am doing this. I’m hoping to inspire other people to be more sensitive to this crisis and help in any way they can. To all the families still waiting to be reunited, I would like to let them know they are not alone. We will continue to fight for them.”

For more information on the fast, visit breakbreadnotfamilies.org or lupenet.org. You can also go to TexasCivilRightsProject.org to find more ways to assist the separated families.