For the Sumner family, supporting a local veteran-owned and operated brewery was a great way to spend a Saturday.

Drawing crowds from all over the Rio Grande Valley last Saturday, the 5×5 Brewing Company held a ribbon cutting ceremony at their location, which is connected to the Mission Center for Education and Economic Development at 801 N Bryan Rd. 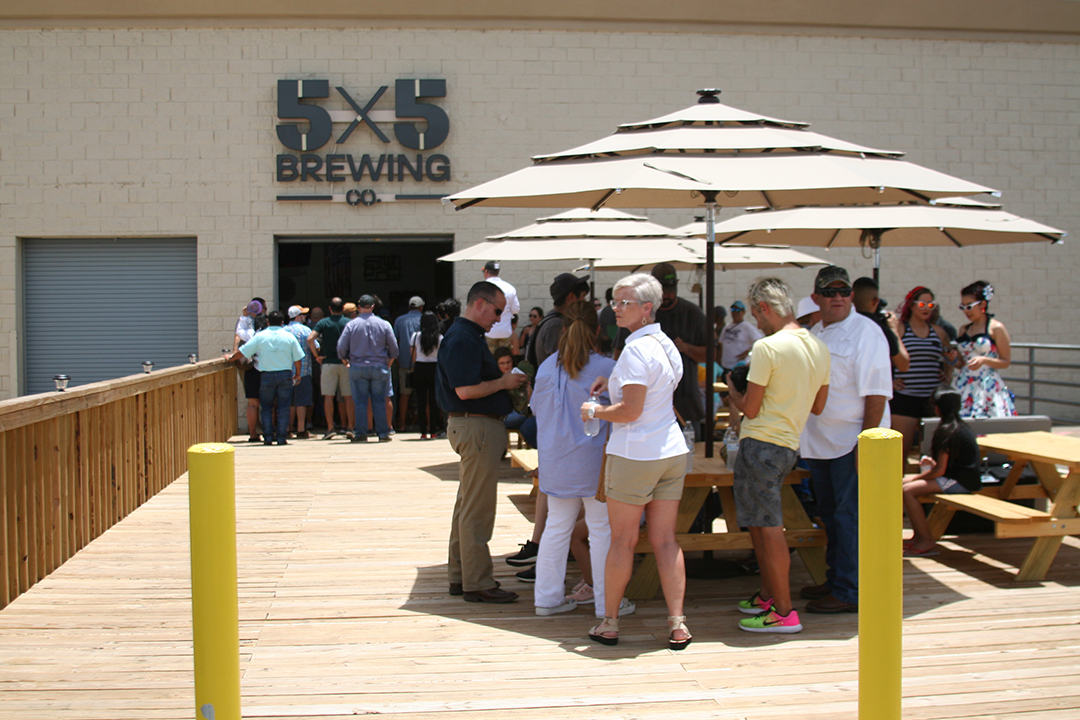 The event featured five kinds of craft beers made at 5×5, and people had the option to purchase a beer card for $25, and use it for five beers. There was also a $40 option, which included a special 5×5 pint glass.

Live music played throughout the afternoon and evening, and food trucks were also present. The opening included a flyover of two vintage military planes in celebration of the veteran-owned business.

Gregory and Belinda Sumner and their son Greg were drinking 5×5 Brunette Bombshell beers outside as the event began. Gregory and Belinda, who live in Mission, are U.S. Marine Corps veterans. They expressed their support for the company and what they are doing for the city.

“We like to support veteran-owned organizations, so that’s why we made sure to come out here,” Gregory Sumner said. “We like to support local stuff in Mission too, and try to keep more stuff this way instead of everybody going to McAllen.”

Belinda said that any time people can support the veteran community after “everything they’ve done for us,” they should.

“They put in a lot of hard work,” Belinda Sumner said. “And I think it’s helpful for the whole community to turn out. This is a great turnout.”

For their son, who is a fan of craft beer, the opening was a chance to try some new brews and back a veteran business.

United States Senator Juan “Chuy” Hinojosa attended the event, and said he was happy to support new business in the area.

“They’re very family-oriented,” Hinojosa said. “It’s another business that will create economic activity.”
Hinojosa said that the most important thing for him is that the owners of 5×5 Brewing Co. are a group of mostly veterans.

“It’s very important as a community that we serve, protect and help our veterans integrate back into communities when they’ve been at war,” Hinojosa said. “Veterans are our families. It’s important that we support this type of business and help them succeed.”

Mission Mayor Armando O’caña was glad to see businesses in Mission growing. He said that hopefully other business owners would see the benefits of choosing Mission for new locations and operations.

“When the research started coming out that beer is good for the heart, we felt that maybe it was time,” O’caña said. “They came up with a brilliant idea, and they chose Mission too.”

O’caña said that the city government chose to be supportive of the pilot program.

“We’re hoping that they expand and stay in Mission,” O’caña said. “It’s unique, it’s different, and the bottom line is this is the City of Mission, and we’re growing.”

Jessica Ortega-Ochoa, a council member for the City of Mission, was also interested to see how new enterprises and companies in the city contribute to the overall quality of life and energy in Mission.

“I think it’s great for Mission, look at how packed it is today,” Ortega-Ochoa said. “Mission is growing. The vision is going to be different from now on, and we need to give those companies that opportunity to come to Mission.”

Sean Downey, a partner of 5×5 and the company’s brand manager, grew up in the Mission area, and was pleased to see the turnout for the opening.

“We’re really super excited that we finally got to this day,” Downey said. “It’s been a two-year process, we’ve had a lot of knock-downs, but just like when we were in the military, we get knocked down, we get back up, we just keep swinging.”

Downey said 5×5 is happy to be in the Mission community, and wanted to support local veterans and their families, law enforcement, first responders, Border Patrol and everyone in service to their communities and country.

Jason Flores, a resident of the Mission area, came to the event with some of his friends.

“Being that this is the first big brewery event in the Mission area, and how they were able to combine the community with local vendors, it’s something really cool, something different,” Flores said.

Flores hoped the company encourages more locally-owned breweries and businesses to expand their market, and also that people begin to lose the stigma typically held toward companies who focus on crafting and selling alcohol.

“Craft beer is really different from bars or other major venues,” Flores said. “I’m hoping that a lot of people will be able to see how the craft beer community is very much involved with the general community. It’s not just about going out and drinking, it’s about going out, making new friends and getting to know new people while trying local products and supporting local business.”