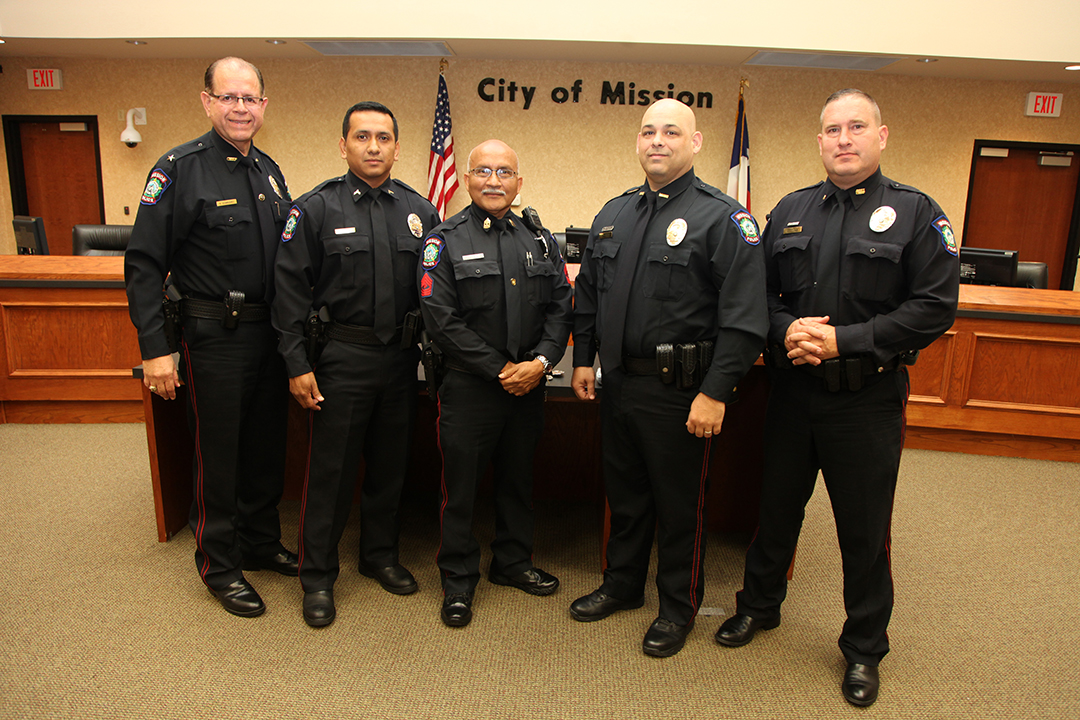 Surrounded by family and friends, the men were thanked and congratulated by Chief Robert Dominguez, who spoke about their accomplishments and service for the city.

“I know how special it is after all the hard work and dedication,” Dominguez said. “These young men and women that we have in our organization work hard and have dedicated years and have struggled to climb the ladder of success, it’s not easy.”

Dominguez said that earning these positions is a lengthy and difficult process.

“I’m very proud of what they’ve done,” Dominguez said. “Obviously, they’re still young, and I think even more determined to move up the ladder, this is just another important step in that process.”

Dominguez also thanked the family members present for their support of Mission PD and their loved ones.
“From the very beginning, family is always there to support,” Dominguez said.

Jody Tittle, who has been an officer for 18 years, was named the new assistant police chief. Dominguez appointed Tittle and said he was the best candidate for the position.

“It was a hard decision for me,” Dominguez said. “We have great people in our organization.”

As tradition serves in Mission, the officers were pinned by members of their family. Each spoke after their pinning. Tittle was excited to see the three other officers be promoted with him, as he has worked closely with each of them throughout his career.

“I have a tie with them,” Tittle said. “It’s very exciting for me to see these senior guys get promoted by my side.”

Ramon said he had taken the test required to be promoted three times, and “the third time’s the charm.”

“I’m excited for the challenges that lie ahead,” Ramon said.

Cedillo thanked everyone for continuing to motivate him and be there for him throughout his time as an officer of the law.

“I’m looking forward to the next chapter in my career,” Cedillo said.

Monforte also thanked the people who helped him along the way.

“I want to thank you all for giving this opportunity, not just to me, but to them, to our families,” Monforte said. “Thanks to the Chief for giving me the opportunity back in 1999. I hope I will serve you well as I have.”

Mayor Armando O’caña was also present at the event, and spoke about the importance of police officers. He said that he has seen them in action, and encouraged them to take it to the next level with their promotions.

“I would like to challenge the four of you,” O’caña said. “When you take the rank, do it in the best interest of our citizens in Mission.”

Mission council member Jessica Ortega-Ochoa, who has worked with the four promoted officers when she was with the Crime Victims unit, was also present at the pinning ceremony, and thanked the officers and their families for their dedication to the job.

“They’re great,” Ortega-Ochoa said. “I think they’re what we need for the future of Mission. Their dedication and loyalty to our city says a lot.”

City Manager Martin Garza, Jr. said it was a great day in
the City of Mission to see promotions of police officers.

“It’s something that brings a lot of pride and joy not only to the department heads, but also to the Mayor and city council, because we see growth in the city,” Garza said. “I’ve worked with these four gentlemen, and we’re in great hands. The City of Mission is in great hands.”