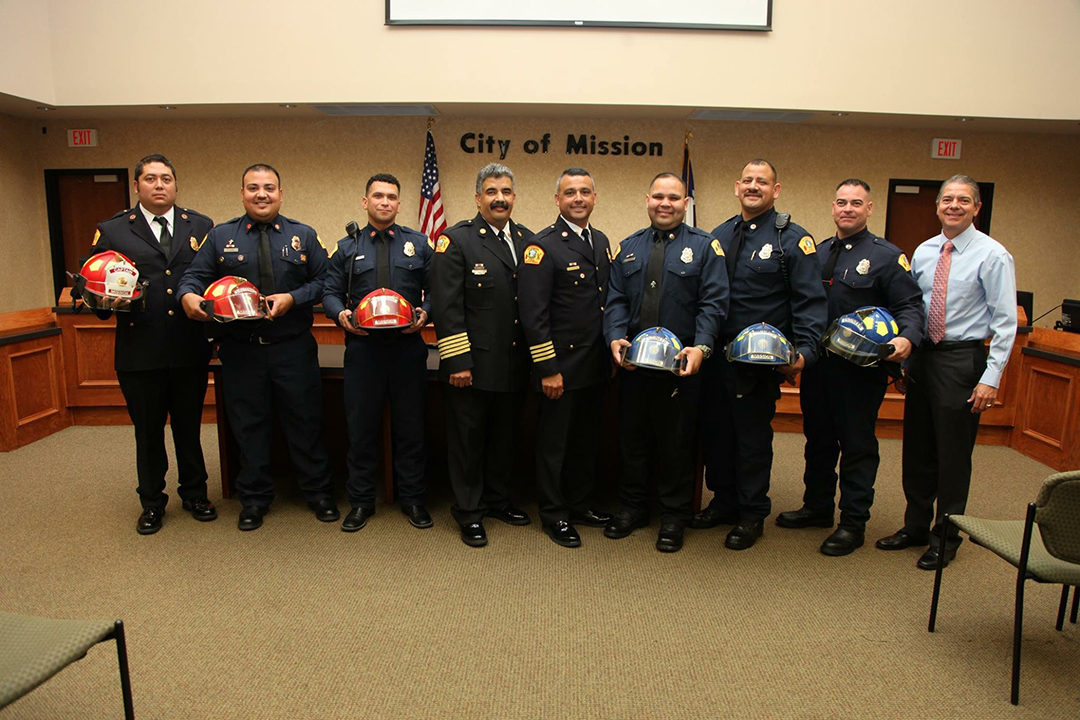 The firefighters were honored again at the city council meeting held this Monday at the Mission City Hall. Fire Chief Gilbert Sanchez introduced the newly promoted officers, who all spoke at the meeting and thanked their loved ones and colleagues for helping them achieve their promotions.

“It’s a great honor to be part of the city, and we’re going to continue to do what’s best for the community,” Engineer Eric Lopez said. “Some of us are just starting off, and some of us are just getting to the positions that require great responsibility.”

Eric Lopez also said that they look forward to taking on that responsibility, and their first priority is taking care of the citizens of Mission. Captain Navarrete thanked Chief Sanchez and the Mission community for allowing them to “continue development and enrichment.”

“We all became firemen because we wanted to help out our community,” Navarrete said. “It keeps us striving for more and helping you guys out.”

Engineer Paul Bernal spoke about the difficulty of the tests they all had to take to receive their promotions.

“A lot of us here took a lot of our time to study, and we were in between family and work,” Bernal said. “It was a great accomplishment for the service of Mission.”

Lieutenant Guillermo de la Garza, Jr. added that the legacy of the fire department has allowed them to learn many things that they still incorporate into their careers daily.

“We have great staff and chiefs, prior lieutenants that have retired, my father,” de la Garza, Jr. said. “And of course, council, that have guided us and helped, so I want to thank everybody.”

The firefighters were excited for the opportunity to instill new ideas into Mission.

“With new promotions come new and fresh ideas,” Navarrete said. “We’ve got some ideas that we’re working with Chief, that’ll hopefully steer the community in the right direction, not that it was going in a bad direction. Just new ideas.”

According to Navarrete, the group joined the fire department in order to serve the Mission area.

“We all joined the fire service team to help the community,” Navarrete said. “But we’re also looking for career development and enrichment.”