In an effort to be more visible to the community, the Alton Police Department has rolled out a bike patrol unit for five of its officers.

This new unit, which has five officers patrolling the city’s parks and nearby neighborhoods, is a way for the police department to interact with the community according to its police chief. 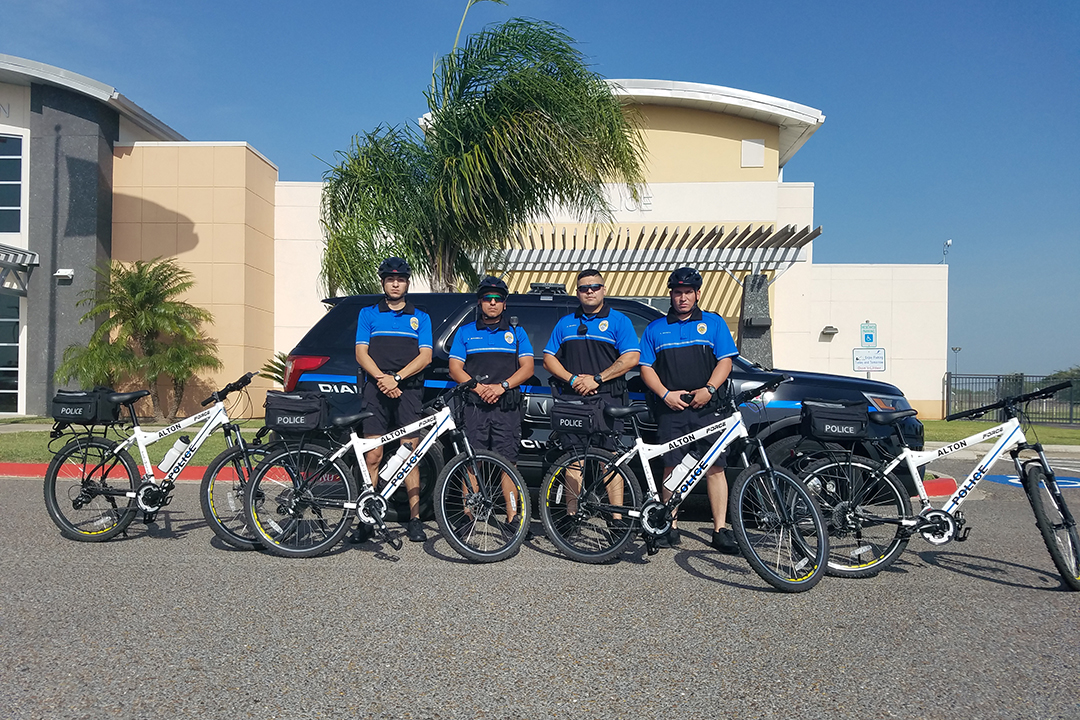 “This patrol allows us to be more engaged with the public in a community-oriented approach,” Alton Police Chief Jonathan Flores said. “The goal is to get the guys out there in the community to serve them and be out there and not be in the office.”

To be part of the unit, officers had to undergo a grueling physical fitness test, Flores said. The bikes, which are Force Perimeter 24 speed mountain bikes valued at $400 each, come with a water bottle holder and a pack to store a first-aid kit along with any other items an officer would need.

The bike patrol unit made their debut at the opening for the city’s Lone Star National Bank last June and since then has been deployed at Sylvia Vela Park and Josefa Garcia Park during the evening hours, Flores said, adding that the officers make appearances during special events.

“These officers are allowed to go into areas they couldn’t traditionally go to in a police vehicle,” Flores said. “This unit is a proactive way to add more security for residents. When you’re trying to keep a community safe, you have to come up with innovative strategies that will serve you to that end.”

Among the events the bike patrol unit will appear in is the city’s first-ever National Night Out, a community-police awareness-raising event that will be held Tuesday, August 7th at 6 p.m. in the Sylvia Vela Park.

“It’s about showing the community what we’re doing,” Flores said.

The bike patrol unit and the city’s first ever National Night Out are among the many changes Flores has implemented in the police department since he was hired last March.

Flores, who has also worked for the Hidalgo County Sheriff’s Office and the police departments for the cities of McAllen, San Juan and McAllen ISD, said he began implementing several changes based on what he’s seen that works in the agencies he’s been involved in.

Among these changes include updating the dispatch system at the police department, doing inventory of all the files and evidence the department had been storing, storing the evidence in a mobile mini storage unit and changing the rank order in the department.

These changes, Flores said, reinvented the way the department functioned.

“All these changes affect the efficiency and effectiveness of the department which in turn allows us to serve the community better,” Flores said. “These changes are well within our operating budget that beforehand was not being fully utilized. Now we’re just providing the resources the department needs to serve the community with the highest quality in professional service.”

For Flores, being a police chief has been a dream and he plans on instilling the department motto-”Community First”-into every facet of the department.

“I’ve always had the goal to be the chief of police,” he said. “I knew it had to be here, it’s a very good environment. I’ve worked at four different law enforcement agencies and this environment is like no other.”

At the lobby of the police department, Flores put up a group photo of every officer in the department so the community can know who their officers are. This photo is right alongside a sign reading the department’s motto “Community First.”

“It’s important the community understands that we put them first,” Flores said. “We’re here because we have to serve them, that’s our role, that’s our job and I want to make sure everyone knows that.”

To that end, Flores also put up a sign along the hallway of the police department saying “Integrity, Professionalism, Community” to ensure his officers are reminded of the department’s core values every day, Flores said.

“There’s an old fashioned form of policing to use the police vehicle as a shield and patrol around with the windows rolled up, distancing yourself from the community,” Arcaute said. “This community-first approach is much more refreshing, especially when you consider how he’s spruced up the department. You start to live with things and get used to it and suddenly; the layout you were used to that was efficient 9 years ago isn’t efficient anymore. A fresh set of eyes has helped us deal with that.”