The 5th annual Back to School Bash was held at Veterans Memorial High School. Approximately 5,000 parents and students passed through the gyms and some hallways set up to provide information and additional services for little to no cost. 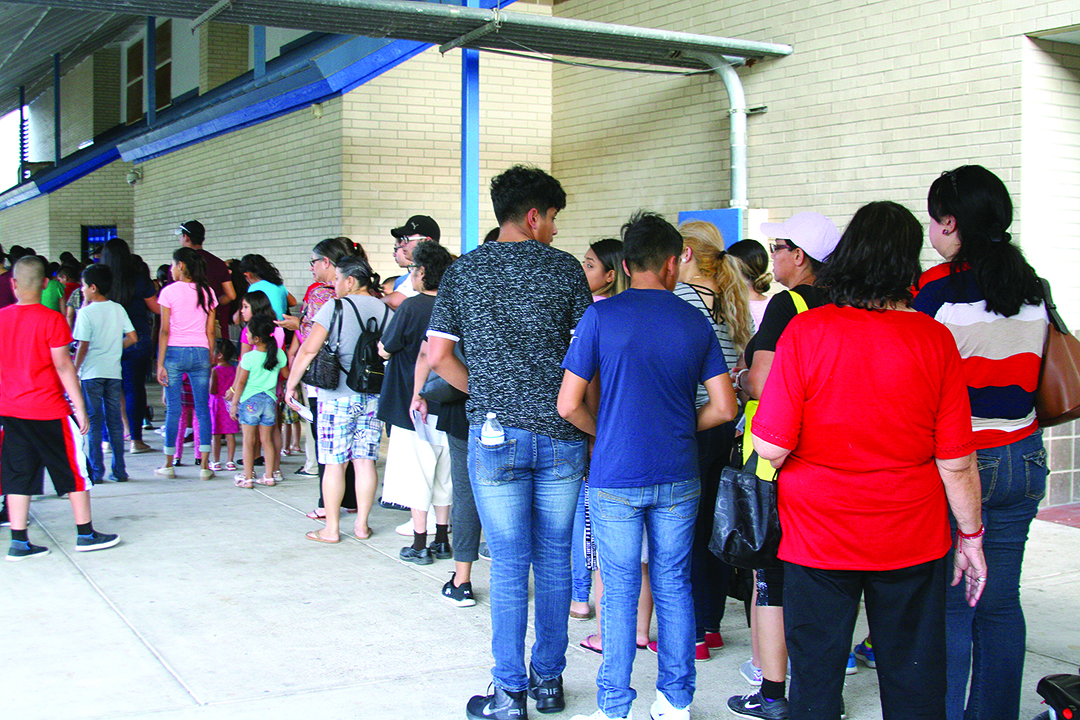 The event included booths representing every MCISD campus, where parents can receive important details about the upcoming school year and then be directed to the other available services at the bash.

“This is truly a team effort,” Craig Verley, MCISD Director of Public Relations and Marketing, said. “It takes a huge volume of volunteers to make this event happen every single year.”

Offering $5 immunizations for students, registration, sports physicals and haircuts, people began lining up hours before the event started at 6 p.m. last Thursday.
Additionally, 2,500 backpacks filled with basic school supplies were distributed at a first come, first served basis by MCISD faculty and city officials. None of the backpacks were paid for with district money, it all came from community support.”

“One of the beautiful things about this is the fact that it is community-driven,” Verley said. “It’s our businesses, our organizations, the three cities that Mission CISD serves coming together to make this event happen. Without their help, and all the support of our volunteers and everyone who made some sort of donation, this would never happen.”

Dr. Carol G. Perez, the MCISD Superintendent, spoke before the doors officially opened and thanked those attending the event for giving back to MCISD children.

“Tonight is all for our kids, and we are just so very excited to see so many of you here,” Perez said. “Many hands made this work.”

Mission Mayor Armando O’caña and City Manager Martin Garza, Jr. were present as officials from one of the three cities represented in the Mission CISD.

“It’s an awesome feeling,” O’caña said. “There are no words that can describe the magnitude of the feeling when you start giving these backpacks.”

O’caña said one of his goals during his time as mayor is youth development.

“The only way to develop youth is to integrate with the school districts, La Joya ISD, Mission CISD, Sharyland ISD,” O’caña said. “It’s sad to say that we do have poor people in our city. But they’re not voiceless.”

O’caña added that he wanted to advocate for the less fortunate members of the district, and that these events are important for children’s education.

“If you get all the supplies and things that you need now, you’re going to be ready by day one,” O’caña said. “On day one, instructional time is very precious. We want our children to be engaged so they can learn and begin to develop themselves.”

The district serves students in Mission, Palmhurst and Alton. Palmhurst Police Chief Michael Vela was also at the bash, and said it was good to see the communities come together for a common cause.

“We help each other out,” Vela said. “Children, whether they live in our city or another city, we’re here to help everyone out, especially in the schools. Everybody’s a team, everybody works together, it’s a team effort.”

“We’re glad to welcome the children back,” Perez said. “They are ready to come back, I think by now they’re a little bit bored at home.”