Last year the La Joya Coyotes football team seemed destined to miss out on the UIL state playoffs for the ninth time in the past 10 years. Consecutive losses to Mission, McAllen High and McAllen Memorial to open District 30-6A play had second-year head coach Reuben Farias’ squad at the bottom of the standings with only three games left on their schedule.

While most teams would’ve thrown in the towel on the season, the 2017 Coyotes were not most teams. They strung three wins together by defeating the Juarez-Lincoln Huskies (24-10), the Nikki Rowe Warriors (17-14) and the Palmview Lobos (49-14) to even up their district record at 3-3 and earn their first playoff berth under Coach Farias. 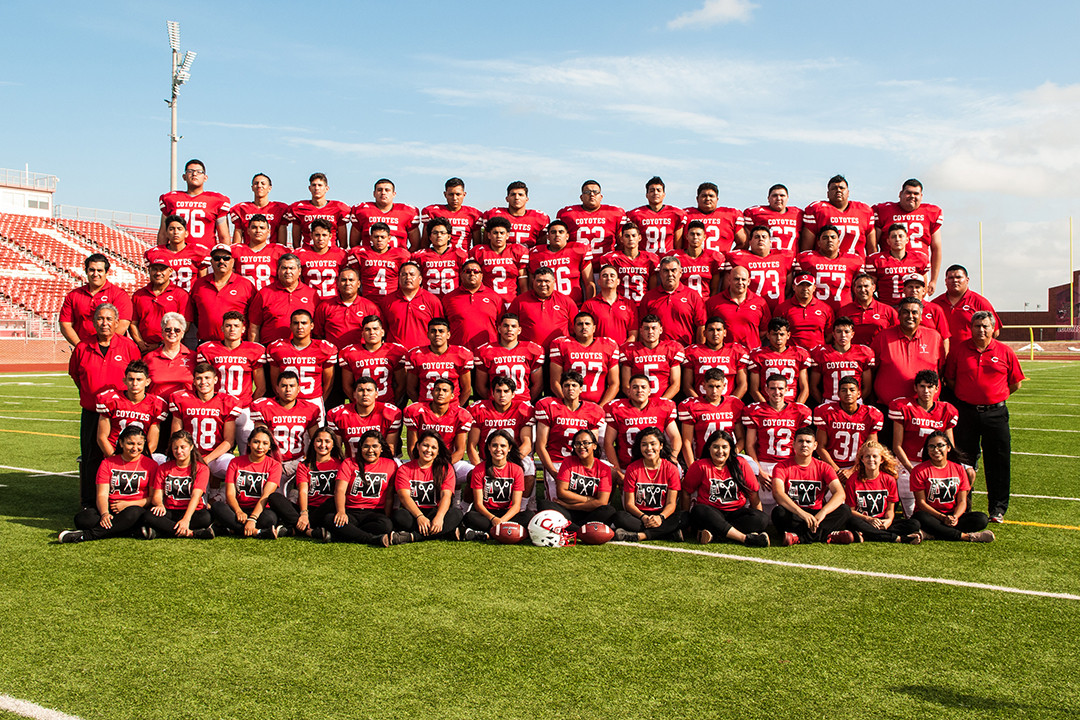 Once in the playoffs, the Coyotes went up against the 6-1 San Antonio Southwest Dragons in the bi-district round. While La Joya played Southwest tough, they fell short by a score of 14-7.

Coyotes’ middle linebacker Trey Perez believes that last year’s regular season success, and their near success in the playoffs, will have a positive effect on this year’s team.

“We should’ve won that game against Southwest,” the 5-foot-9-inch, 180-pound, senior said. “It didn’t go as planned at the end of the day but hopefully this year we’ll get past the first round and go even further.”

Before the 2018 Coyotes can even think about going deeper into the playoffs, they must first qualify for post-season play. When asked what it’s going to take for the Coyotes to do that, Perez said, “It’s going to take chemistry. Knowing each other better we appreciate each other more. And that will help us to get even better.”
And as for what it means for him to be a La Joya Coyote, Perez said, “It’s an honor. My grandpa played for the Coyotes, my Dad played for the Coyotes and now I’m playing.”

When it comes to high school football, Valley teams aren’t supposed to play San Antonio teams as tough as the Coyotes played the Dragons last year; especially not 3-3 Valley teams. Coach Farias shared his thoughts on the game and what he sees as his team’s chances this year.

“It was 7-7 all the way into the fourth quarter,” Farias said. “Then with about three minutes left in the game, their quarterback ran for a touchdown on a broken play. Defensively, we were playing really good. Offensively, we controlled the ball. It was one of those defensive battle type of games and I feel that if we stay healthy, we can remain competitive.”

With the UIL’s most recent realignment, there have been a few changes to District 30-6A, including the departure of the Palmview Lobos and the addition of the PSJA Bears and the PSJA North Raiders.

“There are a lot of tough teams in our district,” Farias said. “Mission is returning a great nucleus of guys. PSJA North didn’t have a great season last year but they had a lot of young players plus some key injuries so they’ll be tough. Then there’s the Pharr Bears, they’re another tough team in our district as are Memorial and McAllen High.”

“As a result of being part of such a tough district, we are approaching each game as a playoff game,” added Farias. “Nobody in our district is going to give us an easy week.”

La Joya junior running back Eddie Villarreal is in his third season on the varsity. He will be counted on to spark the Coyotes’ offense this season by carrying the ball and catching passes out of the backfield. Being an integral part of last year’s playoff qualifying team gives Villarreal a pretty good idea of what it will take for the Coyotes to make it back-to-back playoff appearances this year.

“We just have to take each game one at a time,” said the 5-foot-9-inch, 210-pound running back. “We have to work hard every day, finish drives on the offense and for the defense, tackle well and cause turnovers.”

As for what he likes best about the running back position, Villarreal said with a smile, “Getting hit and hitting people back. That feels good.”

The Coyotes will be opening their 2018 campaign Friday, August 31 with a non-district game at the Palmview Lobos. As for their seven game, District 30-6A schedule, that will kick off on the road at PSJA against the Bears Thursday, September 27 and followed by a home game against the McAllen Memorial Mustangs Friday, October 5.