As an avid hiker, Alton resident Isaac Casas can be seen hiking along the Mission Hike and Bike Trails or the Bentsen State Park. For Casas, the wildlife along the Rio Grande River makes the area unique.

“It’s welcoming, this is a place that is hard to come by,” Casas said. “It’d be a shame if people lose access to it.” 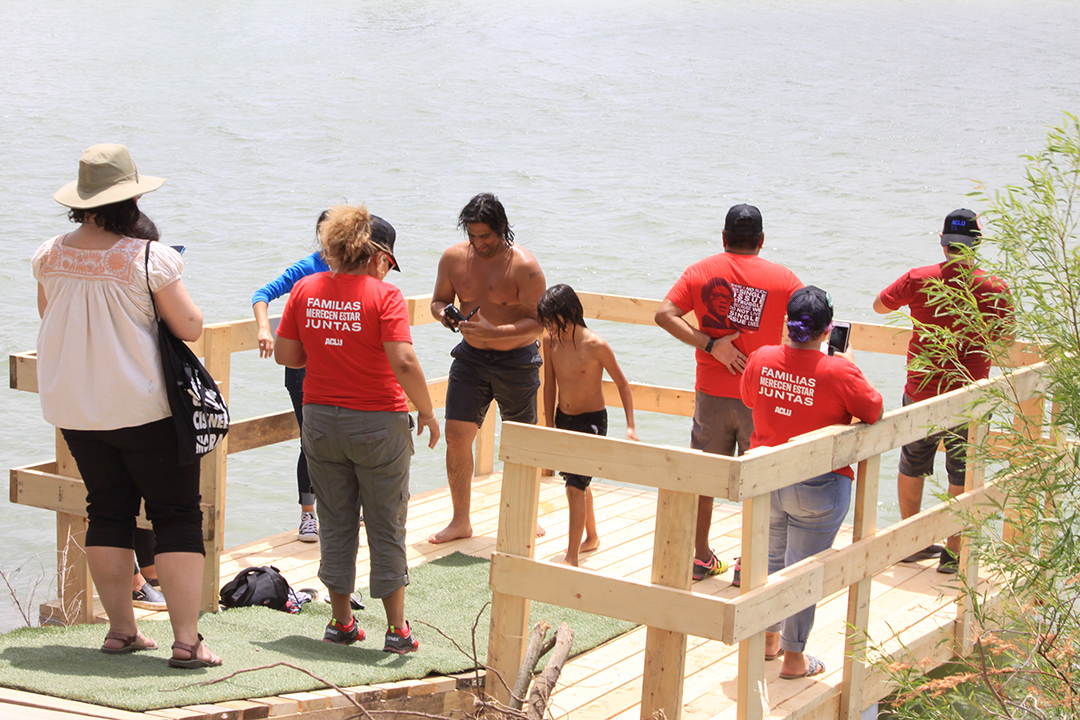 Last Sunday, August 12, Casas joined hundreds of other residents along the banks of the Rio Grande River for “Reclaim the River,” a free event at the National Butterfly Center that also marked the one-year anniversary of the border wall protest at the La Lomita Chapel.

That protest drew nearly 1,000 people to the historic chapel where they walked four miles between Our Lady of Guadalupe Church in downtown Mission to La Lomita after concerns that President Trump’s proposed border wall would leave the mission south of the wall.

This year, the “Reclaim the River” event aimed to commemorate that event by raising awareness of the wildlife along the river. This comes after Trump signed a spending bill last spring that included $1.6 billion for fencing and other border security measures.

Since that bill was signed, U.S. Customs and Border Protection notified landowners of plans to build 33 miles of barrier in Hidalgo County and Starr County. The 25 miles it plans to build in Hidalgo will consist of 18-foot-tall fencing atop vertical concrete river levees — similar to an existing levee-wall structure the federal government built a decade ago. Plans also call for a 150-foot-wide “enforcement zone” on the river-facing side of the barrier with a road for law enforcement and private property owners, 24-7 lighting, cameras and sensors.

As part of the “Reclaim the River” event, the Center held activities on its property south of the levee-usually reserved for members of the center-to the public.

For Casas, the best part of the event was the ability to go to the banks of the Rio Grande River, and witness the majesty of the area.

“This is the first time I’m here, seeing the river up close,” Casas said. “It’s bumming me out that this is my first time here and I may not see this again if the wall comes through. It’s upsetting.”

Also at the event were Jen and Christopher Gabler, who brought their three children to the event. This was the first time the Gablers came to the Center as a family and both say they are vocally against the wall.

For Christopher, a biologist at the University of Texas-Rio Grande Valley, the proposed border wall would be a disaster.

“We bring classes along the river here and it’ll impact our abilities to teach students about these ecosystems,” Christopher said. “Some of these habitats are some of the last ones as intact as they are so their conservation value is really high. Even just constructing a wall affects the migration of species, water dynamics, it’s just generally going to be the final blow for these habitats that have been struggling for a century already.”

Scott Nicol, an executive board member of the Lower Rio Grande Valley Sierra Club, said the event is important for the community to spread awareness of the incoming border wall.

He praised last year’s protests which he said had a hand in preventing Congress from allocating border wall construction through the Santa Ana Wildlife Refuge, but said there’s still a lot of work to be done.

“When crossing the levee to get here, people probably didn’t realize they were crossing the spot where the wall would be up,” Nicol said. “There’s certainly a lot more awareness of what’s at stake locally and nationally, but we still need to send a message to Congress and decision makers that the local community is very much opposed to any border walls here.”

Marianna Treviño-Wright, the executive director of the butterfly center, called the event a success.

She discussed a meeting that occurred last week between the United States Border Patrol and property owners along the river who have been contacted about having border wall construction in their property within the next few months.

She said bulldozing and excavation to begin construction along the levee is set to begin next February.

“People are still not aware the wall has been funded,” Wright said, gesturing at the area surrounding her. “It’s not a matter of maybe, it’s a matter of when and all of this could be lost behind the wall. People can do as we’ve done today and be present. Enjoy the places that are open and accessible and insist that they still remain accessible. These lands belong to our community, and if the government will not buy the land from us, they do not have the ability to deny us access to it.”