It’s been 672 days since the Mission Eagles last played a game at Tom Landry Hall of Fame Stadium.

After renovations to the stadium hit a delay and prevented Mission High from playing on their homefield in 2017, the Eagles have now been practicing on the new turf of Tom Landry Stadium, a welcome change from the dirt and grass they were used to last season. 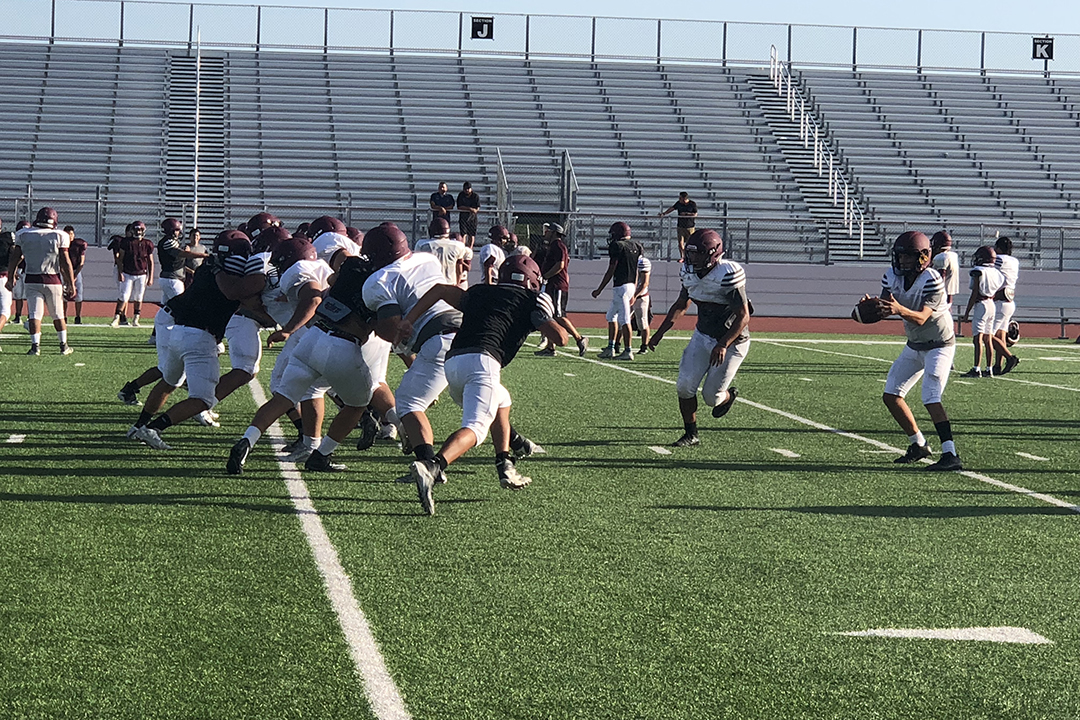 “It’s season time, everyone’s excited to come out here and get back in action,” said senior receiver Sebastian Gonzalez. “We’re fortunate that we have the stadium now. Last year we were on a practice field the entire time, but now we get to practice here and we get to play here at home, so we’re all really excited about that.”

And finally, for the first time since October 14, 2016, the Mission Eagles will play in front of their home crowd at Tom Landry Stadium as they host a scrimmage tonight against the Los Fresnos Falcons.

“That’s going to be fun for these guys,” said Head Coach Koy Detmer. “We spent all year away and that was tough, especially for the senior group we had last year not getting to play any home games. These guys are excited to play at home and they did a great job with the renovations. We’re excited to have a quality group to go against and gauge where we’re at right away.”

In Detmer’s two years as head coach of the Eagles, the team has compiled a 7-13 record. But in those two years, the Eagles have displayed a competitiveness that keeps them in each game, no matter the opponent across the field, and in 2018, Detmer feels the Eagles are close after taking strides forward.

In each of the last two seasons, Mission’s starting quarterback has missed time due to injury. Last year, when starter Damian Gomez went down with an injury, the short-handed Eagles were forced to fill the void at quarterback with running backs.

This season, things are a bit different in the quarterback room with three viable options, including Gomez who returns for his junior year, and the additions of McHi transfer J.R. Cortez, a senior with varsity playing experience, and freshman Jeremy Duran, who Detmer says plays above his level.

“We have a good group of guys and it’s the first time I’ve been here that we’ve had a crew of them,” Detmer said. “We have a good crew of guys there and they’re all working to improve their game, and when they’re called upon they’ll be ready to go.”

And there’s no shortage in weapons at the skill positions for the Eagles with the return of Gonzalez, one of the speediest receivers in the Valley, senior receiver Al Tijerina, and the returning running back combination of junior Horacio Moronta and sophomore Andrew Maldonado.

“We have potential,” Gonzalez said. “Offensively, we’re looking good as a team. We have a lot of people returning on the offensive side, so that’s good. We’re getting a few offensive guys to go both ways to get speed on both sides of the ball, so that’s pretty good for our team.”

Defensively, the Eagles are eager to prove they’re a fast, demolishing unit. The return of junior linebacker Aleksander Gomez and senior Joe Resendez, who missed six games due to a high ankle sprain in 2017, has the defense fired up and ready to roll this year.

“All of us are excited, especially our linebacker Alek, he’s real excited,” said Resendez. “It fires us all up, he gets us into this mentality where the sky’s the limit.”

The sentiment is shared throughout the entire team, and with a new district, each player is focused on one thing:
“Go to the playoffs,” Gonzalez said. “It’s been a while since we’ve made the playoffs, but like I said, we have potential this year. Our team’s looking pretty good. We’re hoping for the best and trusting everyone’s doing their part.”

The Eagles will make their 2018 preseason debut at Tom Landry Hall of Fame Stadium tonight when they host the Los Fresnos Falcons in a scrimmage. The Eagles and Falcons will begin their scrimmage at the conclusion of the freshman and junior varsity scrimmages, which are set to start around 5 p.m.

Mission High will open the regular season with a marquee matchup for the entire city as the Battle of Conway between the Eagles and the Mission Veterans Patriots is scheduled for Friday, Aug. 31 at Tom Landry Hall of Fame Stadium in week one of non-district action