When he first expressed his intentions to create a winery in the Rio Grande Valley, Jorge Jaber said everyone thought he was crazy.

“When I first came here in 1986, I bought this land with the idea of making a winery,” Jaber, 86, said. “I knew a lot about wine, I’ve been drinking it for over 60 years and wanted to create something unique for the Valley but everyone told me then that wine-making grapes, or any plants actually, can’t grow here.” 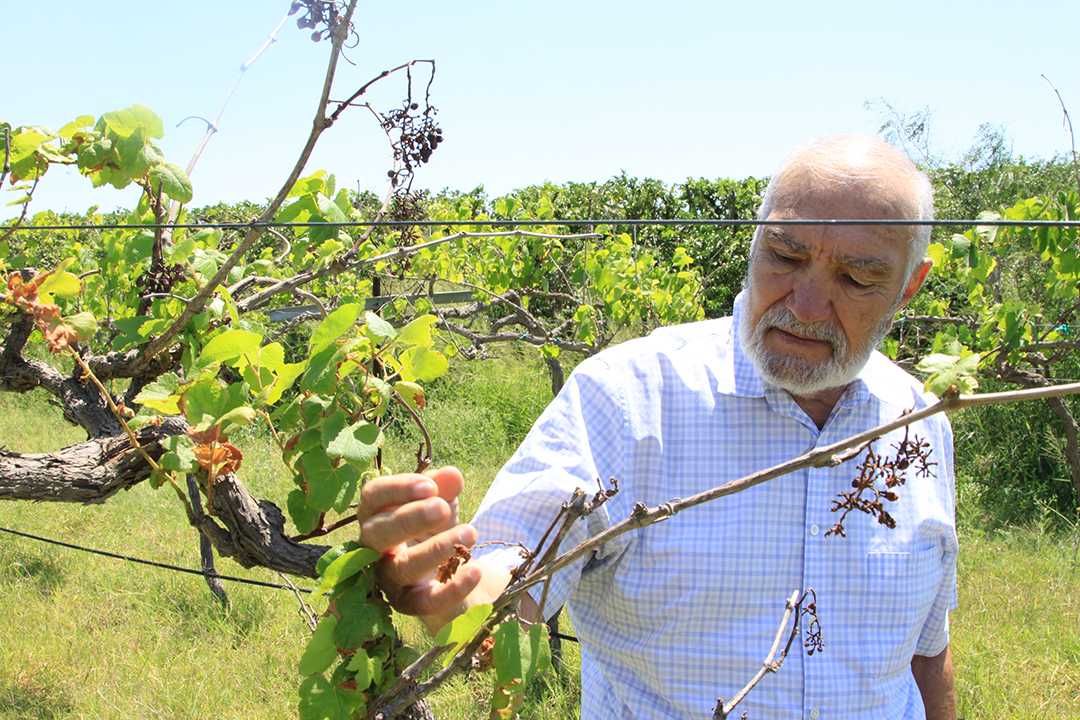 Despite these protests, Jaber planted eight acres of Black Spanish and Blanc duBois grapes in 2009 to make red and white wine, respectively, on his 211-acre ranch located at 22283 N., Western Rd. north of Mission.

In 2011, Jaber Estate, the winery Jaber had sought to create since first falling in love with wine at the age of 25, opened to the public.

“About 800 people were in attendance of that opening,” Jaber, a retired former petroleum engineer from Mexico, recalled. “I felt so happy when we opened, I was accomplishing my dream and I felt so much enthusiasm from the crowd. I thought that, besides giving the Valley something unique, I had given myself an opportunity to work on something I loved doing.”

Now, seven years later, the future of Jaber Estate Winery is uncertain after all the 5,500 grape plants on the property have died from disease.

The grapes used by Jaber aren’t Vitis vinifera, a common wine-making grape, Jaber explained. The plants are a hybrid mixed with local plants to be more resistant toward the diseases in the area.

Unfortunately, within a year after the winery opened, Jaber’s grape plants started dying from many diseases such as cotton root rot, a fungus in the soil that can kill plants.

“The grapes grew in the beginning but with each passing year, more and more plants died. Then came the moment where, as you can see, they’re all dead,” Jaber said, gesturing at his barren vineyard.

Besides a few patches of green-too few patches according to Jaber-the vineyard is devoid of plants.

“There’s some plants still alive, but they’re sick and can’t produce any grapes, it’s been a while since we’ve had a harvest,” Jaber said.

Due to the loss of the grape vines, Jaber has not produced any more wine since the wine produced during the estate’s initial 2011 harvest. Nearly 35,000 bottles of red and white wine sit in his warehouse, kept at 70 degrees Fahrenheit, at the estate, just waiting to be sold.

Selling the wine bottles has proven difficult for Jaber, however. Due to the permits on his property, Jaber can only sell it to customers who come to his estate or through distributors, none of which have expressed an interest in purchasing his wine, Jaber said of the distributors.

The business remains afloat due to the tours of Jaber Estate Winery, which at $15 comes with a free wine tasting of the wine the estate produces, which customers can buy for $15 a bottle.

“The business failed,” Jaber said, adding that he’s invested $1 million into his winery. “It’s just hard to recover from the investment I made into this place that was too big.”

Wine Enthusiast
Jaber still recalls the time he was 25 and tried his first wine-a Chianti paired with beef he was eating.

“And since then I’ve been having wine with all my meals every day,” Jaber said. “Wine isn’t like any other liquor, it’s special to eat with because wine and food complement each other. Everyone always asks if I’m a wino but I think I’m more of a wine enthusiast.”

That enthusiasm is what led him to open his winery to bring to the Rio Grande Valley “its own wine.”

“I don’t regret opening Jaber Estate Winery, I did what I wanted to do,” Jaber said. “But as a business…it wasn’t good. I haven’t made any profit.”

Jaber said he can see the business continue in some way if he buys grapes from north Texas and produces the wine at his estate.

“I just can’t ever see myself growing anything here again,” Jaber said. “There are mornings where I wake up and think, ‘I have to keep going, I can’t give this up. This is what I’ve wanted my whole life.’ But then I look at the reality of it all and how I have very little clients and am struggling financially. If I could I’d live happy if I could continue doing this but it’s costing too much for me. Going on means investing more money, work, time and I’m not sure if more people will come.”