After qualifying for the UIL State Playoffs in back-to-back seasons, the Juarez-Lincoln Huskies found themselves on the outside looking in of post-season play last year.

The fact that they bettered their 2017 District 30-6A record by one game and they posted their best overall record ever last year, made missing out on the playoffs an extremely tough pill to swallow; especially after opening their district schedule at 3-1. That was when they fell to the La Joya Coyotes and the McAllen Memorial Mustangs in back-to-back weeks to finish the regular season at 3-3 (6-4 overall) and in a three-way tie for third place with only two playoff spots remaining. 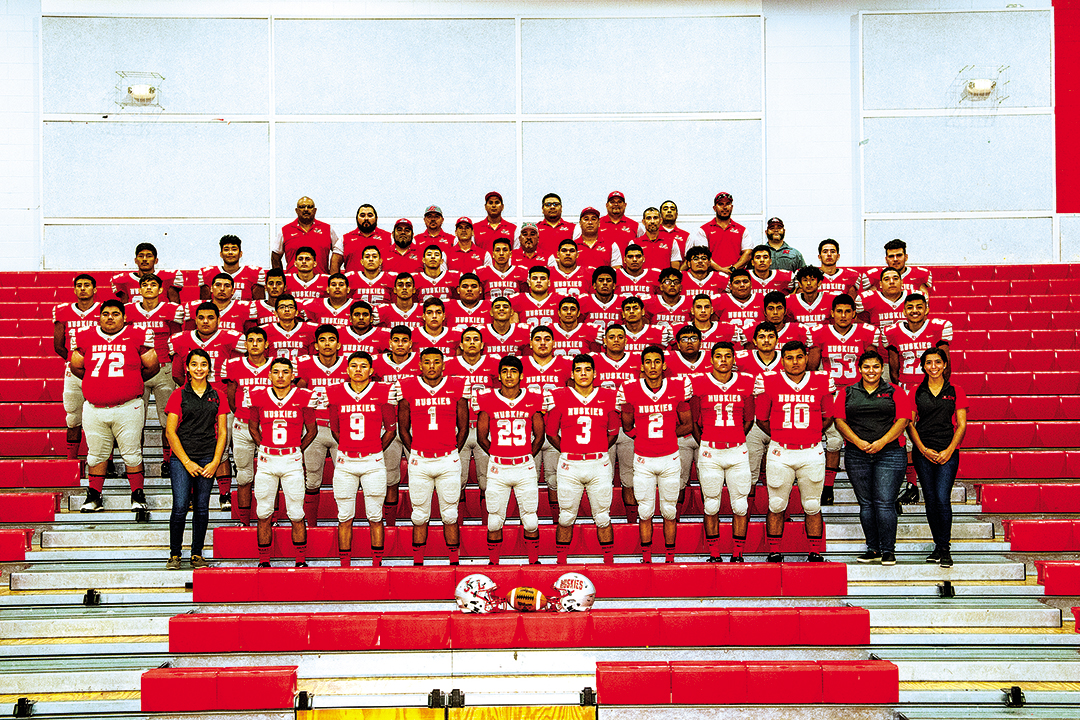 Unfortunately for Garcia and his Huskies, the tie-breakers did not go their way, so the Coyotes and the McAllen High Bulldogs were given the opportunity to extend their seasons into the playoffs, while the Huskies were not.

Having qualified for the playoffs the year before with a 2-4 record, the 3-3 Huskies needed for either the Palmview Lobos to defeat the Coyotes or the Mission Eagles to defeat the Bulldogs in Week 11, their bye week, to qualify for the playoffs for the third year in a row. However, neither of those things happened and that brought the Huskies’ season to a sudden end, at least one week sooner than Garcia had hoped.

“Coming off back-to-back playoff seasons and having our best record ever in the history of Juarez-Lincoln High School at 6-4, we were the odd men out of the playoffs last year with our 3-3 district record,” Garcia said. “It was really tough to be in that position but the kids are hungry and they understand that we had a good team last year and that we’ve lost some very good seniors. But they know that they need to work a little harder or we could end up in the same situation again this year.

“If things had gone our way in the Mission, McAllen High game, we would’ve made the playoffs,” Garcia added. “But we could’ve taken care of it ourselves. That’s the main focus this year. We need to take care of the games we need to win so that we can get into the playoffs and not have to rely on somebody else.”

With the UIL’s most recent realignment, District 30-6A has undergone some changes, most notably the departure of the Palmview Lobos and the addition of the PSJA Bears and the PSJA North Raiders.

When asked which teams he expects to be the teams to beat, Garcia said, “Until somebody beats Memorial, who has gone undefeated in the district for five years, they’re the team to beat. But the PSJA Bears are coming off a playoff season and they have a very good team coming back. It’s going to be a very tough district but I think that our non-district schedule is going to help us get ready for our district opponents. We have Rio Hondo who has 6A numbers, we have Pioneer that is an up-and-coming program and we have the Edinburg Bobcats, who are coming off a playoff year.”

Once again this season, the Huskies will be relying on the Martinez brothers, quarterback Efren and running back Albert, to lead their offense.

“It’s a special relationship that they have,” Garcia said. “They’re the ones that get on each other. Sometimes we need to calm them down by reminding them that we’re the coaches, and while we understand that they’re brothers, we’re in charge. Albert is very quiet while Efren takes control and commands respect. They’re very good kids and are both very coachable.”

While the Martinez brothers are both seniors, Efren is older than Albert. When asked what it’s like to not only have his younger brother in the same backfield as him, Efren said, “It’s pretty special and it’s amazing. Handling the ball off to my brother is special. There’s no other way to describe it.”

As much as the 5-foot-6-inch, 185-pound quarterback enjoys handing the ball off to his younger brother, he will need to be able to pass the ball down the field if the Huskies offense is going to put points on the scoreboard, And which receivers is he expecting to be his main targets this season?

“We have a returning starter at wide receiver in Luis Rodriguez,” the elder Martinez brother said. “We are expecting a lot from him this year. We have another young guy who is a junior. They are both 6-feet tall so they’re going to be big targets and that is a definite advantage.”

Both Martinez brothers’ success this season will be dependent on how well the Huskies’ offensive line blocks and opens up running lanes. While Coach Garcia referred to his offensive linemen as young and inexperienced, Albert believes the offensive line will do what it has to do to allow him to have a successful season.

“The offensive line is less experienced this year than it was last year but I think we have three returning linemen that played varsity last year, and they did good,” the younger Martinez brother said.

The Huskies will open their 2018 season at home when they take on Rio Hondo in a non-district match-up August 31. They will open their 30-6A regular season with a home game against PSJA North, September 28.