Hoping to sweep the blue wave across Texas, several candidates including Beto O’Rourke spent the last weekend making stops in McAllen, Brownsville and Laredo leading up to November elections.

Filling the historic Cine El Rey theater in McAllen with people from across Hidalgo County, last Saturday’s Musica con Beto event included live music and the opportunity to hear Democratic nominees for key positions in state government speak about their plans if elected. 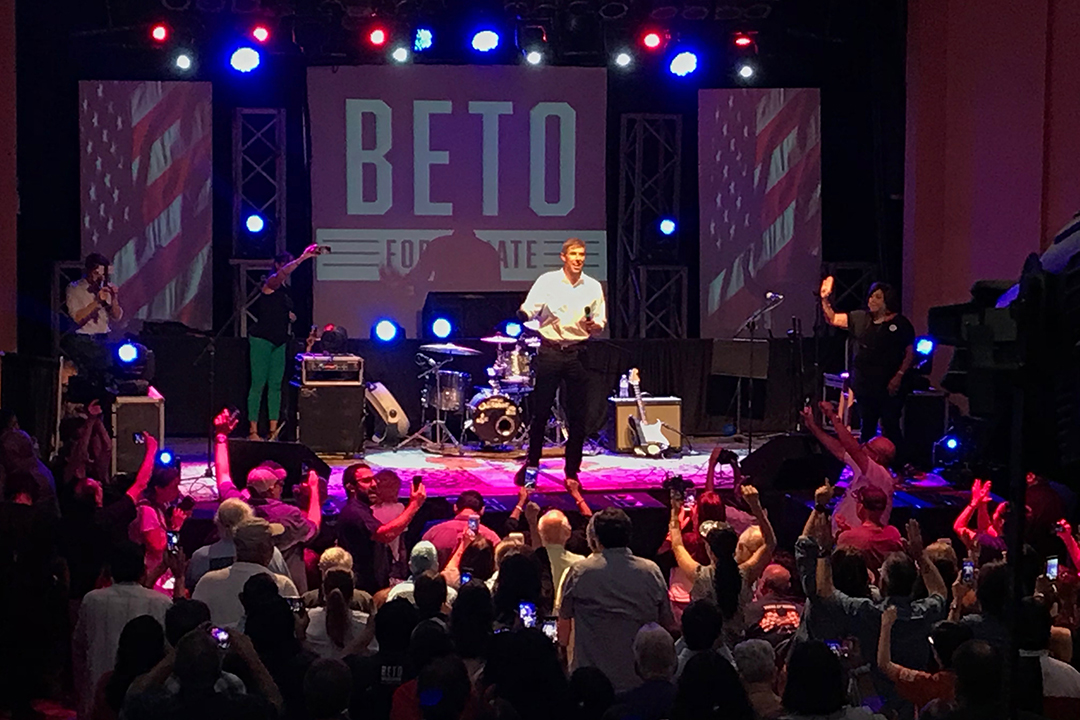 Each spoke about the position they intend to claim and why they are qualified to hold them. They touched on issues of health care, education, budgets and immigration.

While the issues they addressed varied, the central topic they all touched on was changing Texas to a more blue, Democratic-leaning, state.

“It&rsquo;s crowds like you and places like this that we&rsquo;re seeing all across the state of Texas that lets us candidates know that 2018 is a great year to be a Democrat in Texas,&rdquo; Suazo said. “We have 80 days to seal the deal in Texas. We have 80 days to turn Texas blue.&rdquo;

Fernando Mancias, the current Democratic candidate for 93rd state District Judge in Hidalgo County, was at the event. He said Beto is a leader who can connect to people all over Texas, and especially in the Valley.

Mancias was there to support all Democratic candidates present, and believes the political climate in Texas is moving in a different direction.

“There&rsquo;s a big change coming our way,&rdquo; Mancias said. “I think we&rsquo;re going to see a big change in November.&rdquo;

Mancias said it is important that people go out and vote this year in particular.

“Education is at stake, social security is at stake, a lot of benefits that people have enjoyed and earned over their lifetimes are all at stake,&rdquo; Mancias said.&rdquo;

Cristela Alonzo, a Valley native who is the first Latina to write, produce and star in a primetime TV show on a major American television network, was the special guest speaker for the event. She also drove Beto to all the stops he made in the RGV.

“I had to go on the road with Beto because I need to explain to people what people here [in the Valley] are like,&rdquo; Alonzo said. “When you see my face and you don&rsquo;t know me, you think that the only thing I care about might be immigration. But there&rsquo;s so much more to it.&rdquo;

Alonzo said that Beto is the candidate who cares about people no matter who they are or where they come from.

“The future is about moving forward, and so should we,&rdquo; Alonzo said. “We need to vote for someone that depends on the majority of the people to tell them what to do. We need to support a candidate who believes that we should all be equal.&rdquo;

Leading a grassroots campaign paid for entirely by donations, Beto O&rsquo;Rourke has grown in popularity. He hopes to take the senatorial position from Ted Cruz, the Republican candidate who has been in office since 2013.

O&rsquo;Rourke urged people to contribute to the country through their vote.

“The intense, fierce pride that I feel in this community today is going to make the difference not just in this election, but in making sure that we deliver on the very high expectations that we have set for one another,&rdquo; O&rsquo;Rourke said.

O&rsquo;Rourke related his upbringing in El Paso to living in the Rio Grande Valley. He mentioned the similar cultural makeup of the communities, and how the blending of countries made them stronger and more diverse.

“The border was a place for the ambitious, not for the faint of heart but for those that wanted to take a chance and bet everything on bigness and greatness,&rdquo; O&rsquo;Rourke said. “That was our defining characteristic.&rdquo;

He also went into detail on education, health care, the war on drugs, climate change and immigration, particularly how immigrant families are treated.

“We, the people of the border leading the way, and those that followed our lead throughout Texas and the country, made sure that we brought the public pressure that forms the political will necessary to get this administration to stop taking kids from their parents, at least temporarily,&rdquo; O&rsquo;Rourke said. “We&rsquo;ve got to keep that up so that every single one of those children is reunited with every single parent who risked it all to bring them here. We can do this.&rdquo;

Beto O&rsquo;Rourke has traveled to all 254 counties in Texas, and said that he hopes to represent people of all political parties and affiliations.

“Whoever they voted for in the last election, they&rsquo;re every bit as Texan, every bit as American, every bit as human as anyone else in this room,&rdquo; O&rsquo;Rourke said. “And they deserve to be listened to, to be heard, to be respected, to be served and to be represented. So we&rsquo;re showing up for everyone.&rdquo;