Operating out of a small space with a staff of six, Diego Silva has recently been named the director of a local branch of an international non-profit organization.

Silva has been the director of the Buckner Family Hope Center in Peñitas, located at 39614 Mile 7 Rd. Suite 3, by La Nutria Rd, since Aug. 13. As he is learning a lot from the staff at the center, he also brings his experience working for Buckner International for five years as a Missions Group Coordinator and Missions Team Lead with the Domestic Missions Team in Mission. 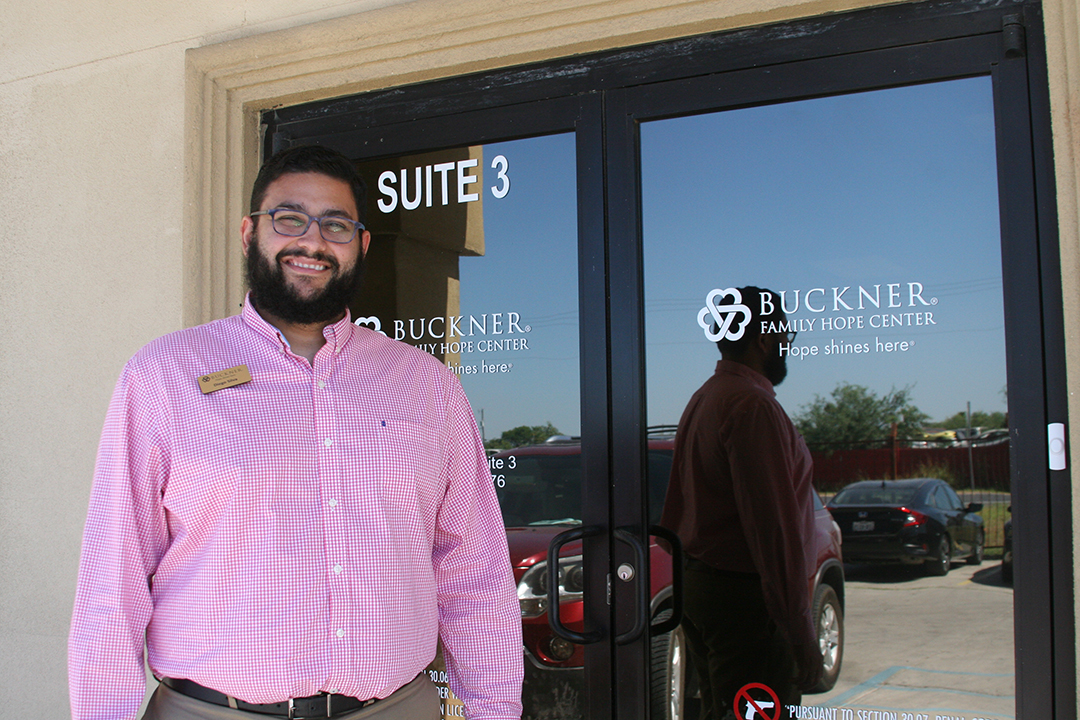 Buckner International is a non-profit ministry serving the United States and internationally. Started by a Baptist preacher in Dallas 139 years ago who saw the needs of orphaned children after the American Civil War, the organization has expanded. It has had a presence in the Valley since 1971.

The Family Hope Center in Pe&ntilde;itas is one of the programs offered by Buckner Rio Grande Valley, an extension of Buckner International. The Hope Center, open Mon. through Fri. from 8 a.m. to 5 p.m., services those within a 20-mile radius of the location, helping 3,000 to 4,000 people annually.

“It&rsquo;s a very high number of people to serve in a center this small with a small staff,&rdquo; Silva said. “It&rsquo;s a small center, but a lot happens here.&rdquo;

Silva is originally from Brazil, and moved to Texas with his family when he was 14 years old. After getting a Bachelor of Arts in Biblical/Theological Studies from Baptist University of the Americas, he and his wife Gabriela, a court reporter, began moving more and more south in Texas.

They settled here because Silva said they found a family-oriented place that held the values they wanted to raise their sons with. He now holds a Master of Public Administration from the University of Texas Rio Grande Valley.

“We saw that the Valley has very high family values,&rdquo; Silva said. “It really just transcends ideologies and political positions. Even though [the Valley] has this high need, we&rsquo;re experiencing rapid growth, which is an amazing opportunity for our family.&rdquo;

Silva, a self-proclaimed people person who felt a calling to help as many individuals as he can, found that Buckner International gives people the opportunity to empower themselves and strengthen their family lives.

“We&rsquo;re pouring in a lot of resources and a lot of time in family strengthening programs and family preservation programs,&rdquo; Silva said. “We do that through a set of protective factors: strengthening the family, social connections, parental resilience and providing support in times of need.&rdquo;

The Hope Center offers English as a Second Language courses taught by Region One Education Service Center, parenting classes, entrepreneurial courses, job interview training and many other classes throughout the year. When the Progress Times stopped by, the center was filled with people registering themselves for these courses and getting information about what the center offers parents every year.

“We&rsquo;re responding to a very specific need,&rdquo; Silva said. “The Family Hope Center is a preventative program. The reason we exist is to help the family be strong so that children won&rsquo;t end up in the foster care system.&rdquo;

Recently, the Family Hope Center in Pe&ntilde;itas held a shoe and school supply distribution. They gave needed shoes and supplies to about 400 families.

“Our core, and the most important thing we do, is elevating families through family coaching, this is also what&rsquo;s known as case management,&rdquo; Silva said. “We have a case manager, or family coach, working with the family unit, identifying areas of need, issues and strengths in order to create a transformational plan.&rdquo;

According to Silva and Development Officer Monica Skrzpinski, the main goal is to help families achieve what they need to achieve to stay together and become successful.

“We are a portal to help,&rdquo; Skrzpinski said. “We bring different agencies and collaborate, we are pulling together to strengthen this community and shine hope on the Pe&ntilde;itas area.&rdquo;

The Buckner Family Hope Center in Pe&ntilde;itas opened its doors in April 2011, and Silva said he has seen a positive impact on the community since then, including a decrease in the levels of depression in mothers and an overall visible improvement to the aesthetics of the area, which was accomplished through the community and not Buckner itself.

While Buckner International is a non-denominational faith-based organization, Silva said that faith is the framework for the moral mission of the center.

“We are not a church, that is the key,&rdquo; Silva said. “Sometimes we do have bible studies, but the idea is that we want people to connect with God and our Creator, and we&rsquo;re unapologetic about our faith. We&rsquo;re not here to indoctrinate anyone, we&rsquo;re here to love.&rdquo;

Skrzpinski said they couldn&rsquo;t do what they do in the RGV without the help of the community, volunteers and donations. She can be reached at 956-585-4847 (x227) or mskrzypinski@buckner.org.