People from all over the Rio Grande Valley, including Mission, McAllen, Harlingen and Brownsville, gathered at the Mission Event Center last Thursday for a kickoff breakfast for Making Strides Against Breast Cancer, an event held by the American Cancer Society.

The event included information about how to fundraise money for those with breast cancer with the American Cancer Society. April Chapa, who works for the organization as the Senior Community Development Manager for the South Texas area, spoke during the breakfast. 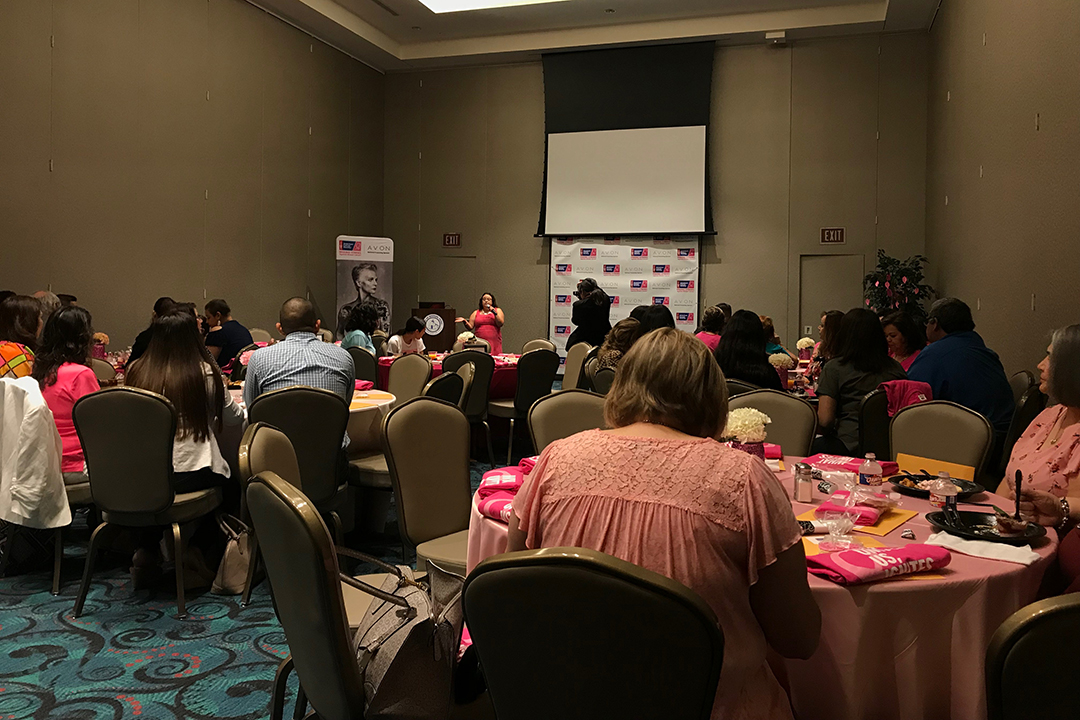 “The closest Making Strides [event] is in Corpus Christi,&rdquo; Chapa said. “So, for ten years, people from the Valley have driven up to Corpus to go make strides up there and participate in that event. I felt we needed this event in our Rio Grande Valley.&rdquo;

The American Cancer Society will be holding a fundraising walk starting at the Mission Event Center on Sat., October 13. So far, they are sponsored by Avon, H-E-B, Kendra Scott, Mission Regional Medical Center, Social Life, the City of Mission and iHeartRadio.

Some of the attendees of the breakfast were survivors of breast cancer, or fought alongside loved ones who have battled breast cancer. Mission Mayor Armando O&rsquo;ca&ntilde;a, council member Jessica Ortega-Ochoa and City Manager Martin Garza, Jr. were also in attendance.

“We are all here united in the fight against breast cancer,&rdquo; Chapa said. “What unites us ignites us. That&rsquo;s kind of the theme of Making Strides.&rdquo;

Chapa said that the American Cancer Society cannot accomplish what it needs to without the help of many people fundraising and spreading the word about donating to the organization. According to her, the group saves lives, provides free lodging for those undergoing treatment, answers calls 24 hours a day, 7 days a week, funds research and provides free wigs and headscarves for those who have been diagnosed and are fighting cancer.

“Every single dollar donated, every single cent and coin that you raise, no matter how big or small, helps someone who has been touched by breast cancer,&rdquo; Chapa said. “We are united and we are ignited against breast cancer. Obviously, cancer doesn&rsquo;t stand a chance against us when we&rsquo;re together.&rdquo;

Chapa added that there are several reasons a person might be at the event, from being diagnosed with cancer themselves to being there because their company has sponsored the walk. She said that they were all united in order to do more and make a difference when it comes to fundraising research and saving lives.

Patricia Almendarez, Zasha Amar and Naomi Sanchez are three survivors who have been named this year&rsquo;s Portraits of Hope in the RGV, and they will be honored during Making Strides. They spoke at the kickoff breakfast about their stories and how others can make a difference.

“I want to make sure that nobody my age or younger or older ever has to be told ‘you have cancer,&rsquo;&rdquo; Amar, who is currently undergoing treatment for cancer, said. “At any age it&rsquo;s really hard, but when you have a two year old at the time, it&rsquo;s very scary. So we&rsquo;re here to make sure that we raise money and we&rsquo;re able to come up with treatments and plans and preventions.&rdquo;

Sanchez, a Mission native and eight-year cancer survivor, said she was diagnosed with stage 1 triple negative breast cancer at the age of 27. Her family has a history of breast cancer, but it still took seeing three different doctors to find one who would order a mammogram and find out if she had cancer after discovering a lump on her left breast.

“With six months of strong chemotherapy, the possibility of having children was low,&rdquo; Sanchez said. “Today, David and I now have three children. Every day is a blessing. I had cancer, but cancer never had me.&rdquo;

Almendarez had three young daughters when she was first diagnosed in 1999. Through the American Cancer Society, she was able to meet several people who were diagnosed with cancer in the area.

“We formed a club that we don&rsquo;t want to be a member of,&rdquo; Almendarez said. “But we&rsquo;re here, and we&rsquo;re survivors, and we help one another.&rdquo;

For more information about the Making Strides Against Breast Cancer of Mission fundraising walk or the American Cancer Society, or how you can donate, representatives can be found at MakingStridesWalk.org/RioGrandetx.