All is back to normal in the football world as the Mission Eagles and the Mission Veterans Memorial Patriots prepare for this year’s Battle of Conway back where it belongs, at Tom Landry Hall of Fame Stadium.

No more renovations, no more travelling to different cities to see your hometown teams play, no more questions. The time has come to strap on the helmets, throw on the pads, and put on a show for not only the city of Mission, but the entire Rio Grande Valley. 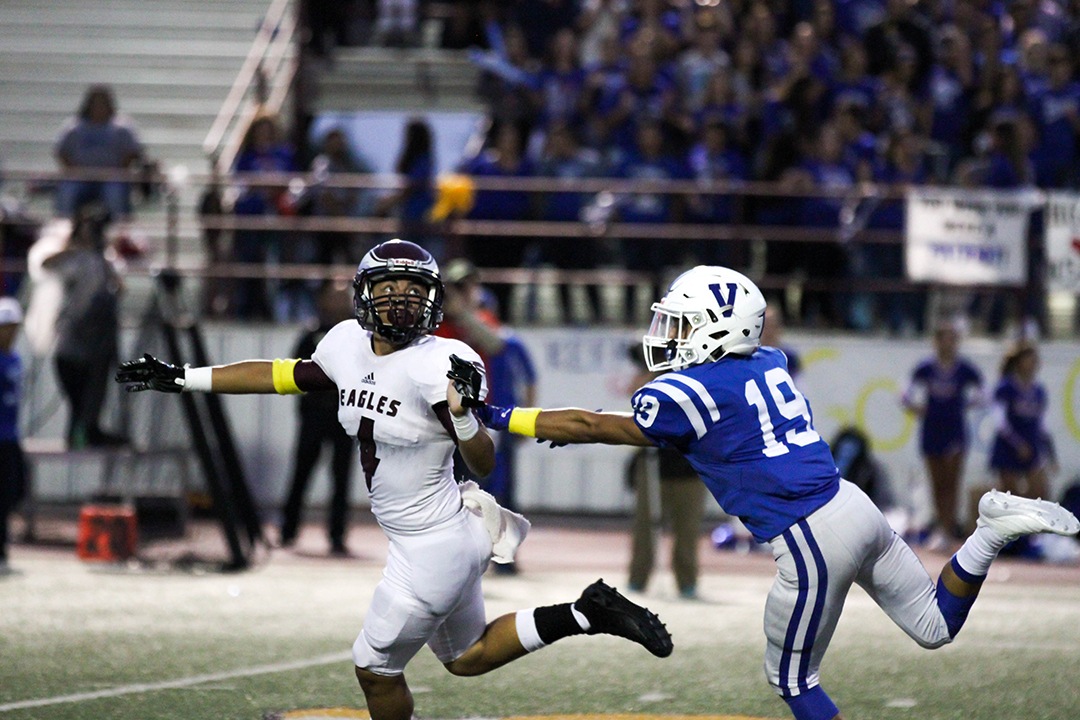 “We can’t wait for it to get here,” said Mission Veterans Head Coach David Gilpin. “It’s been a long offseason, it’s been a great offseason, but we’re excited for the season to get here and what better way to start it off than lining up at Tom Landry Stadium against your sister school.”

“That’s going to be fun for these guys,” said Mission Eagles Head Coach Koy Detmer. “We spent all year away and that was tough, especially for the senior group we had last year not getting to play any home games. These guys are excited to play at home, they did a great job with the renovations and we’re excited to get started.”

Both teams enter the 2018 season looking to make a statement. The Patriots have prevailed in The Battle of Conway in four straight years and are arguably the Valley’s top team. Coach Gilpin said while the game is non-district and won’t have any effect on the Patriots’ long-term goals of a district championship and deep playoff run, there’s no non-district feel to the rivalry game.

“We’ve been fortunate to win the last four years and when you can put a win streak together like that against a rival team, it’s not something that happens so often,” he said. “It doesn’t feel like a non-district game, it is a rivalry game.”

The Mission Eagles are a team on the rise, loaded with talent and looking to put the Valley on notice right away that they can play ball. When asked about the goals the Mission Eagles set for 2018, senior linebacker Joe Resendez had the rivalry on his mind.

“First of all, we want to beat Vets, then we want to go as far as we can,” Resendez said.

The Patriots have pulled out the last two victories by scores of 18-14 in 2017 and 42-35 in 2016. Coach Gilpin knows the Patriots will again be tested by a tough Eagles team, but that won’t stop Mission Veterans from doing what they do.

“We know it’s going to be harder this year,” Coach Gilpin said. “They’re a good football team, they’re bigger than us, they’re faster than us, but that’s the way it is for us every week and we’re used to that, and that doesn’t phase us because we’re going to go out and do what we do.”

And the Eagles are ready to roll. While the Patriots were able to break in the stadium by hosting a Bi-district playoff matchup last season, Mission High hasn’t played a home game in nearly two years.

“We haven’t played on this field since our sophomore year, so we’re all excited to come back, see the crowd, see the excitement and tear stuff up,” said the senior linebacker Resendez.

Mission Veterans senior dual-threat quarterback Landry Gilpin, an All-State selection in 2017, said while the game at Tom Landry two years ago saw a packed house, the hype surrounding this season’s Battle of Conway is bigger than ever.

“It’s going to be awesome to have the whole community out there,” Landry Gilpin said. “I know two years ago when we did play at Tom Landry, the stadium was packed, and I know that one wasn’t as anticipated as this one’s going to be. I know we had a little fall off and had to go play in Donna last year, but I think this year’s game is going to be awesome for the community to get together and come watch us.”

The Battle of Conway is scheduled to kickoff at 7:30 p.m. at Tom Landry Hall of Fame Stadium in Mission. There will be a special ribbon cutting ceremony at 7 p.m. before the big game gets underway.