Today’s matchup between the La Joya Coyotes and Palmview High School Lobos began with the Coyotes winning the toss and the Lobos receiving the kick off. #21, Carlos Pena, of PHS received the kick off and ran the ball a few yards for the return and a couple plays later ran the ball for a long touchdown across the field only a couple of minutes into the game putting PHS up by 6. PHS missed the extra point but spirits were still up for PHS taking the early lead. With a couple minutes, still on the clock in the first quarter Eddie Villarreal, #27 from LJ, responded with a touchdown of his own and Coyotes kicker, Eddie Villarreal #2, put up the extra point moving LJ in to the lead by 1 point at the end of the first quarter.

The initial playout gave the appearance both teams were going to put up a good game, then things took a drastic turn. PHS took the kick return and only moved the ball down a few yards and it was at this point Palmview struggled to move the ball. The LJ defense started to put up an unpassable wall that lead to LJ pushing PHS back further and further into the in zone and scoring with a safety on the 3rd down. LJ kept the wall up for just about all of second quarter and even broke past the offensive line for a quarterback sack by LJ’s Javier Ramirez. By the end of the second quarter, the score was 6 to 26 with the Coyotes in the lead. 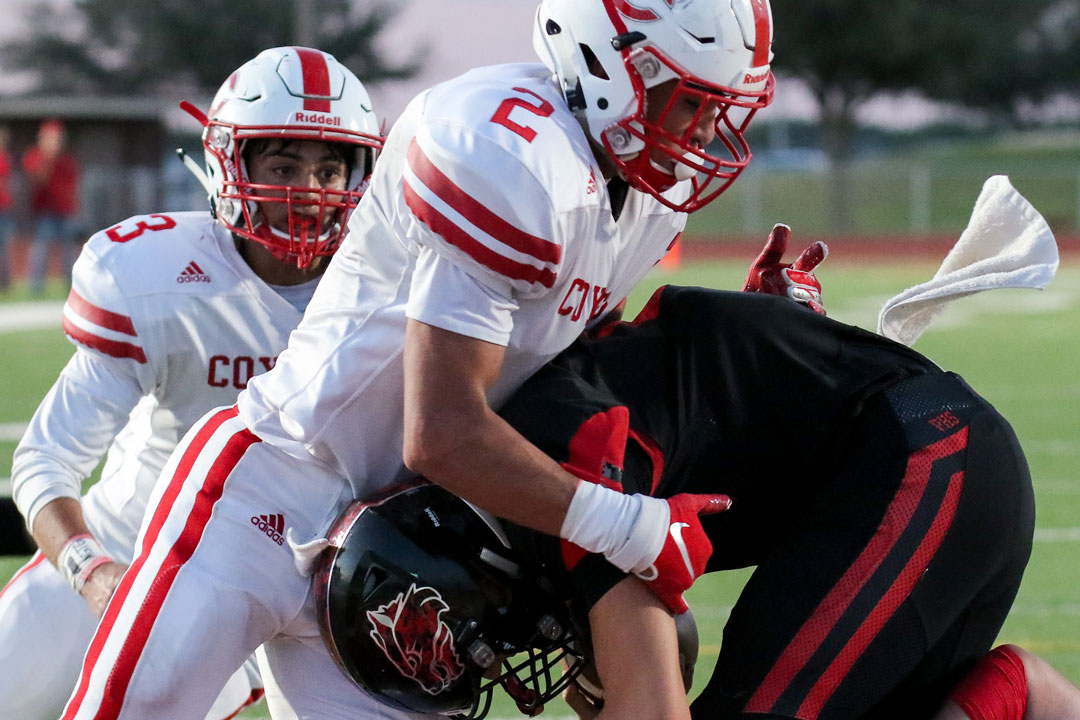 After half time PHS came back on to the field with fire in their eyes, you could tell they were ready to make stuff happen, but LJ defense had that same look and they were not about to let anything get past them. PHS again struggled to move the ball and turned it back over to LJ.

With the clock at 11:08 in in the third quarter LJ did it again; #4, Rodriguez of LJ, took the ball in for another touchdown and again the extra point is good. With the score now 6 to 33 in La Joya’s favor, PHS player started to show frustration. If they were going to do something to get back in the game, now was the time; but the LJ defense did not let it happen. LJ’s defense kept PHS at the line just about every play no matters what they tried and to make matters worse for PHS, Ian Delgado, #4 of LJ, breaks past the line for another quarterback sack.

With 2:45 remaining in the third quarter, PSH defense stated to push back. PSH kept LJ from moving the ball leaving them at their own 10-yard line, forcing them to punt. A loose ball on the snap put Charlie Alvarez, #11 kicker for LJ, into a frenzy to get control of the ball.

He managed to take control and attempted a punt, but it was blocked by PHS leading to a wild loose ball bouncing around a few yards from the in zone. PHS managed to recover the ball as it crossed in to the in zone for their second touchdown of the night. Even though PSH was still down their spirits were back up as they attempted a 2-point conversation. But again, the LJ defense put up a wall and did not allow it to happen, leaving the game at PSH 12 – LJ 33 with only 33 seconds remaining in the third quarter.

Now in Q4, the entire mood of the game has changed for PHS, as LJ’s #10, AJ Hernandez carries the punt return down most of the field. This was immediately followed by Jacob Gonzales, #16 of LJ, taking the ball in for another touchdown and Coyotes making the extra point again. The score was now PHS 12 – LJ 39. Then out of nowhere PHS caught a second wind and started moving the ball and LJ received a penalty for un-sportsman like conduct, putting the ball closer to the goal line than PHS has seen in a while. PHS looked determined to score one more touchdown and continue to move the ball. 1st down, 7-yard line, #4, David Flores takes the ball and LJ cannot stop him… touchdown and the extra point!

Score, PHS 19 – LJ 39. After this touchdown you could tell Lobos players were relieved they scored, but that sense of relief was short lived as there was only 4 minutes and 6 seconds remaining and LJ now had the ball. LJ played the ball smart the last few minutes and ran the clock down for a final score of 19 to 39 in LJ’s favor.