The streak? Over. For the the first time in five seasons, the Mission Eagles are going home as winners of the Battle of Conway as they upset the Mission Veterans Memorial Patriots 24-12 at Tom Landry Stadium Friday night.

“It feels really good to end the streak and bring that helmet back to Mission High,” Mission running back Tito Moronta said after the game as the Eagles were hoisting the helmet trophy awarded to the winner of The Battle Conway. 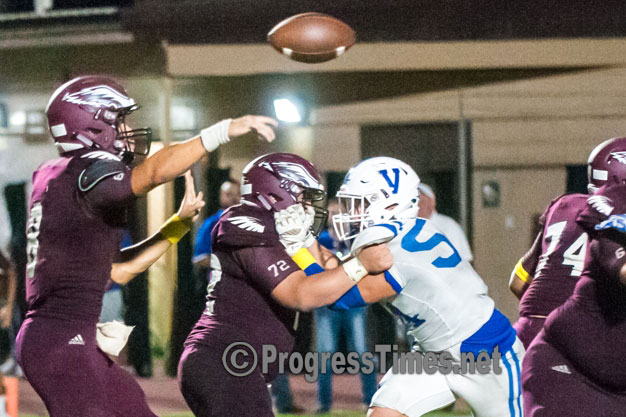 And from the first snap, the city of Mission knew it was in for a good one.

Moronta scored on the Eagles’ second play from scrimmage on a 22-yard run. Two plays later, the Mission Veterans connection of Landry Gilpin and Mikey Garcia struck, hooking up on a 73-yard touchdown.

What started as a fast-paced track meet slowed into a defensive slugfest with each team forcing turnovers and trading big hits. At the half, the score was just 10-6 with Mission holding a slim lead.

The Eagles defense forced a turnover to start the second half when Mission’s Fabian Ahumada intercepted a ball meant to be thrown away by Gilpin. The turnover didn’t phase the Patriots offense though as they got the ball back and scored on their next possession thanks to a 8-yard scramble from Gilpin to pull ahead on the scoreboard 12-10.

Then towards the end of the third quarter, Mission quarterback Damian Gomez went down hard on a tackle and left the game due to injury. A few plays later, he was back under center and putting the Eagles in the end zone with a QB sneak from the 1-yard line.

“Nothing was going to keep me out of this game,” Damian Gomez said. “The intensity, the trash-talking in this game, I wouldn’t trade it for nothing and I wasn’t going to miss another snap of this one.”

Then he did it again. The Mission quarterback converted a second QB sneak for a six to put the Eagles out in front 24-12, sealing the victory for Mission High.

Damian Gomez finished the game with 144 total yards and two scores on the ground while Moronta posted 152 rushing yards on 26 carries with a score. Bruising fullback Andrew Maldonado added 42 yards of his own.

The Eagles defense contained Gilpin for the most part but the Patriots’ quarterback still managed to finish the game with 77 yards on the ground and 175 through the air while scoring two touchdowns with two interceptions and one fumble. Garcia finished the game with 140 yards and a score on seven catches, but it wasn’t enough to overcome the Eagles’ defense.

“We flew to the ball, we knew Landry was going to be a hard tackle,” said Mission linebacker Aleksander Gomez. “We flew and we played four quarters. It was a lot of intensity and emotion leading up to it, but we didn’t let it get the best of us and we were able to get the win.”

Mission Head Coach Koy Detmer hopes the Eagles can turn the Week 1 rivalry win into momentum that can lead the team to see more success in 2018.

“It’s a big win for us,” Detmer said. “It’s a big game for the town and the community, so for us, hopefully we can grab some momentum and some good energy going forward from it.”

As for the Mission Eagles players, they feel they put the Valley on notice.

The Mission Eagles (1-0) are back in action Friday, Sept. 7 as they host Donna North at Tom Landry Stadium. Next up for the Patriots (0-1) is their nine-game district schedule as they travel to take on PSJA Memorial on Thursday, Sept. 6.

Here are a few photos from Friday night’s game. To view more, visit our online gallery by clicking here: