From the banners hanging in the gym to the countless trophies lining cases at Mission Veterans Memorial High School, one thing is clear: Lady Patriots volleyball is a powerhouse.

For 16 years, the mastermind behind the Lady Patriots’ dominance has been Head Coach Diana Lerma, who on Tuesday, Aug. 28 reached a milestone by notching her 600th career victory at Mission Veterans by beating Tuloso-Midway on the road in three straight sets, 25-16, 25-12, 25-16. 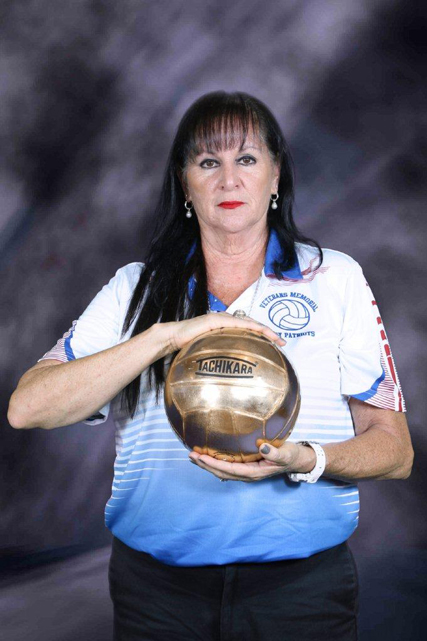 “It was an experience because I never really noticed the count, then they told me when you play Tuloso, you’re going to hit 600,” Lerma said. “I know in district, in the 16 years I’ve been here, we’ve only lost 12 games. That’s what one team loses in one season. It makes me feel good that our girls and our students were excited about that.”

When Lerma took over the team years ago, she wasn’t expected to win right away, but rather build the program. Instead, Lerma and the Lady Patriots had other plans as they proceeded to go on a run of seven straight district titles.

“I’ve always wanted to come to my hometown and I remember when I first got the job here I was all excited,” she said. “They said ‘well, in the first three years, you’re not going to win because you’re going to build the program.’ We won seven titles back-to-back and out of the 16 seasons, it’s only two that we’ve come in second place, and those two times, we outlasted the first place teams by going farther in the playoffs.”

In those 16 years, Lerma has coached her three daughters, Sonia, Gabrielle and her youngest Kassandra, who is currently in her junior season as a middle blocker for the Lady Patriots.

“It’s kind of crazy because I remember when I was a little girl and I would go see her and my sisters play for her, I would be there watching thinking this is going to be me someday,” Kassandra said. “I never thought she would hit her 600th win with me. I knew she was a winner, but wow. Volleyball has been in our family forever. As a team, we’re all proud of her.”

The thing about the Mission Veterans Memorial Lady Patriots is that they’re rarely bigger, faster or stronger than their opponents. Lerma has an ability to get the most out of her players, who together as a unit, work harder, longer and smarter than the opposition.

“I would credit her success to the knowledge of the game,” Gilpin said. “She does a great job coaching the fundamentals, but she also does a great job working the minds of our girls. She’s able to get our girls to play at a level they don’t think they can. She’s able to get our girls to beat teams that are bigger than us, taller than us, more athletic than us, and she’s done that year in and year out.”

The Lady Patriots have reached the Sweet 16 four times in school history and have won 14 district titles with eight perfect district records. While many Valley teams stay local in tournament action to prepare for district play, Mission Veterans is travelling up north to face high-caliber teams they’ll meet down the road in the state tournament.

“We all grew up together and she was always our coach,” said Kassandra, who is teammates with her cousin Jackie Howell, a returning All-Area selection. “We all grew up mainly with her telling us we’re champions, and now I feel like we’re going to go far because she’s put that in our brains since we were so young. She knows how to pump every girl up to play their best.”

Lerma credited Carmela Martinez, her former coach who helped Lerma reach her goals of playing college volleyball at Texas State and taught her how to be a good leader.

“I always wanted to come back after I played college ball at Texas State to give back the opportunity that she gave me to say anybody can do this,” Lerma said. “She was a second mom to me and I coach the way she does. She was very disciplined, and we’re not only teaching the sport of volleyball. I think when you finish the program, you’re going to be very successful woman because you know what it is to get along, to be on time. We’re teaching the game of life. It’s like what we say ‘we have these hearts beating all over the place, you have to get them to beat as one for us not to break.’”

And the Lady Patriots aren’t breaking anytime soon. They are currently 20-3 on the year and ranked #4 in the state by MaxPreps and #6 in the Texas Girls Coaches Association poll.

“When you talk about volleyball in the Rio Grande Valley, Mission Veterans is sitting right there at the top,” Gilpin said. “There’s some other good ball clubs, but we’re right there and it’s a consistent thing. We’ve been competitive in the regional tournament a few years now. 600 wins is a tremendous milestone, not only have you been at it a while, but you’ve been very successful at it. I’m glad to be here and be a part of it.”

The Lady Patriots are back in action at 7 p.m. on Tuesday and will be looking to pick up win number 601 for Coach Lerma as they host Brownsville Hanna.