Thousands of cars pass by the La Joya Police Department every day, but something about the Altima made Arriaga suspicious. He quickly found probable cause for a stop: the Altima had been following another car too closely and had an inoperable brake lamp. 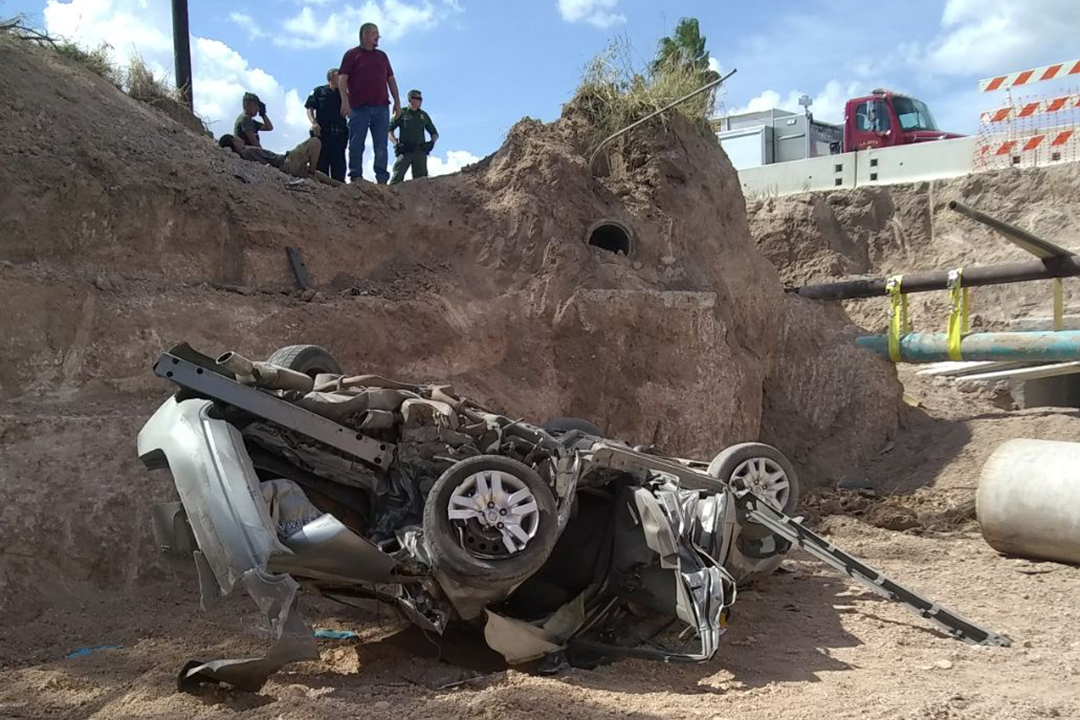 At 4:02 p.m. on Aug. 30, Arriaga pulled behind the Altima and activated his red-and-blue lights.

Arriaga quickly fell behind the Altima, which accelerated toward Peñitas. The driver veered right, cutting across two lanes to pass slow-moving cars on the shoulder, and raced back to the left lane, zipping past a UPS truck.

While the Altima dodged traffic, Arriaga followed at a safe distance. Moments later, he saw a massive cloud of dust.

The Altima had careened off U.S. 83 and landed upside-down in a ditch — with the driver and four passengers inside.

The driver, 18-year-old Kevin Salinas of Donna, refused medical attention. Officers arrested Salinas and transported him back to La Joya for questioning.

“Chief Arriaga asked him why he had sped off and disregarded his presence,” according to the criminal complaint. “Mr. Salinas stated that the four passengers were undocumented person (sic) and he was transporting them to an unknown location and was going to get paid $150.00 per each person he transported.”

Salinas is charged with smuggling of persons younger than 18 years old, a second-degree felony, and evading arrest or detention with a vehicle, a third-degree felony.

Court records don’t list an attorney for Salinas, who remains at the Hidalgo County jail and couldn’t be reached for comment.

The incident injured four people, including a teenager, and snarled rush-hour traffic on U.S. 83. It also made clear that La Joya is still participating in a federal border security program, despite concerns about cooperating with U.S. Immigration and Customs Enforcement.

On Aug. 30, though, he worked overtime through Operation Stonegarden, a border security grant program that targets drug trafficking and migrant smuggling.

After making the announcement, the city didn’t accept Operation Border Star funding from the Governor’s Office, concerned the program wasn’t compatible with the mayor’s announcement.

Operation Border Star, which targets criminal activity on the Texas-Mexico border, requires participants to submit a statement promising to: “(1) notify DHS of all information requested by DHS related to illegal aliens in the custody of the Grantee; and (2) detain such aliens in accordance with requests by DHS,” according to the Governor’s Office.

However, the police department remained part of Operation Stonegarden — even though it required the city to submit an identical statement.