With high school football officially underway across the state of Texas, teams are hoping to get off to a good start in 2018.

After a tough Week 1, two Big 7 teams looking to bounce back from season-opening losses are the Juarez-Lincoln Huskies and the Pioneer Diamondbacks, who are set to clash Friday night at Richard Thompson Stadium in Mission. 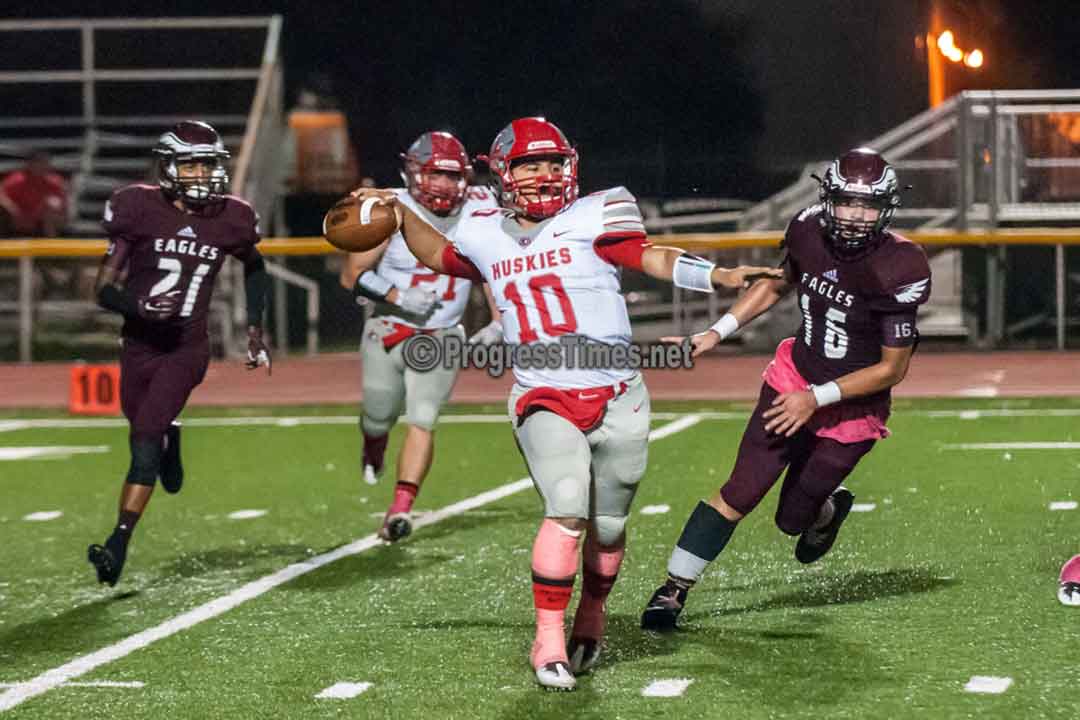 Pioneer Head Coach Tom Lee knows the Huskies will be entering the game just as hungry as the Diamondbacks to put that first W of the season on the board.

“They’re a good football team,” Lee said. “We know they’re going to be hungry too. They started the season off 0-1 as well, so it’s going to be a dogfight on Friday.”

Juarez-Lincoln Head Coach Tomas Garcia and his group know what it’s like to face adversity, so the Huskies are gearing up for the Friday night challenge the Diamondbacks present in Week 2.

“It’s not the first time we’ve faced adversity here at Juarez-Lincoln,” Garcia said. “The attitude is great here. They understand how hard it is to win in our district, and our non-district games, that’s why we’re playing these very tough opponents. These kids will rise to the challenge and hopefully come out with a victory Friday night.”

The Huskies are coming off a 41-21 loss to the Rio Hondo Bobcats last Thursday, a game in which Juarez-Lincoln held a seven-point lead entering the final quarter. Senior brothers Efren and Albert Martinez, the team’s quarterback and running back, connected three times against Rio Hondo for the Huskies’ three scores, but it wasn’t enough to overcome critical special teams errors in key moments.

The Juarez-Lincoln punt unit mishandled two snaps, one which was returned for six in the second quarter, and the other late in the fourth quarter that was recovered by the Bobcats deep in Husky territory.

“We’ve been putting a lot of emphasis on special teams because those momentum swings hurt us big time,” Garcia said. “We’re going to correct it, that’s what these non-district games are for, to get us ready for district.”

Albert Martinez, who finished the game with 214 total yards and three touchdowns, leads the Juarez-Lincoln offense into a game against a speedy Pioneer defense. The Huskies’ offense knows they have to pick things up after going scoreless in the second half of Week 1.

“The first half was definitely our half, we did a lot of great things on offense like distributing the ball to all our receivers and a good run game,” said junior receiver Issac Villanueva. “The second half, we had some missed opportunities but I think we’ll bounce back from that.”

The Pioneer Diamondbacks have put last week’s 64-17 loss to Harlingen behind them. After opening the season on the road in Boggus Stadium, Lee feels his team is resilient and will be ready to roll Friday night against the Huskies.

“They’re resilient,” Lee said. “We went back to work on Monday, we got to forget about what happened last week. That was a good team that took it to us and we got to get better each week; our kids made a concerted effort this week. We’re getting ready for Juarez-Lincoln, we’re not looking ahead, not looking behind.”

Despite the 47-point Week 1 loss, Lee saw some bright spots from the Diamondbacks. Quarterbacks Eddie Lee Marburger and Jacob Rosales both threw touchdown passes for Pioneer, but the two combined to throw three interceptions, one which was returned for six.

Lee said Marburger showed promise in hostile territory in his first real game and Pioneer will continue to utilize both him and Rosales, who saw time at receiver against the Cardinals.

“He did a good job and for it being his first real game in Harlingen at Boggus Stadium, that’s not an easy task,” he said. “Obviously, he’s got some improving to do, just like our entire team does, but that’s the good thing about these kids here, they know what they did wrong and they’re going to fix it. We’re going to continue doing what we’re doing with those two guys.”

Pioneer junior receiver Luke Padilla, who hauled in one of the Diamondback scores against Harlingen, feels his team can have success against Juarez-Lincoln if they can become more explosive and find their midrange passing game.

“If we can get our midrange passing game on point then we should be good to go,” Padilla said. “We need to come out on the line more explosive, play hard the entire game and don’t give up.”

The Pioneer offense will be challenged when the square off against the Huskies who are led by a duo of defensive ends who spent last week living in the opposing backfield.

Seniors Xavier Monreal and Jacob Lara wreaked havoc on the Bobcats as they combined for four stops behind the line, two sacks and one forced fumble and fumble recovery.

“One runs and one throws more, it doesn’t matter who it is we just need to get after the quarterback,” said Lara, who was named Juarez-Lincoln’s defensive player of the week.

And the Diamondback defense is ready for the Husky offense. Junior noseguard Erik Torres knows if they can stop the Juarez-Lincoln run-game, they can have a successful night.

“They’re run-heavy so if we can stop the run, we stop most of their offense, and that’s the goal,” Torres said. “We gotta use that energy from that loss and redeem ourselves. Everybody is doubting us, so we just gotta use that as motivation and keep going forward.”

Kickoff between the Juarez-Lincoln Huskies and Pioneer Diamondbacks is set for 7:30 p.m. tonight at Richard Thompson Stadium.