Week One of Valley High School football is in the books and of the seven teams from the Mission, Sharyland and La Joya school districts, the Big 7, only three emerged victorious; the Mission Eagles, the Sharyland Rattlers and the La Joya Coyotes. That of course means that the remaining four teams now find themselves with 0-1 records heading into their Week Two games.

Fortunately for the coaches, the players and the fans of those four teams, all Week One games were non-district. As a result, having one game in the loss column at this point of the season will in no way affect their chances of winning a district championship, or of qualifying for the playoffs. 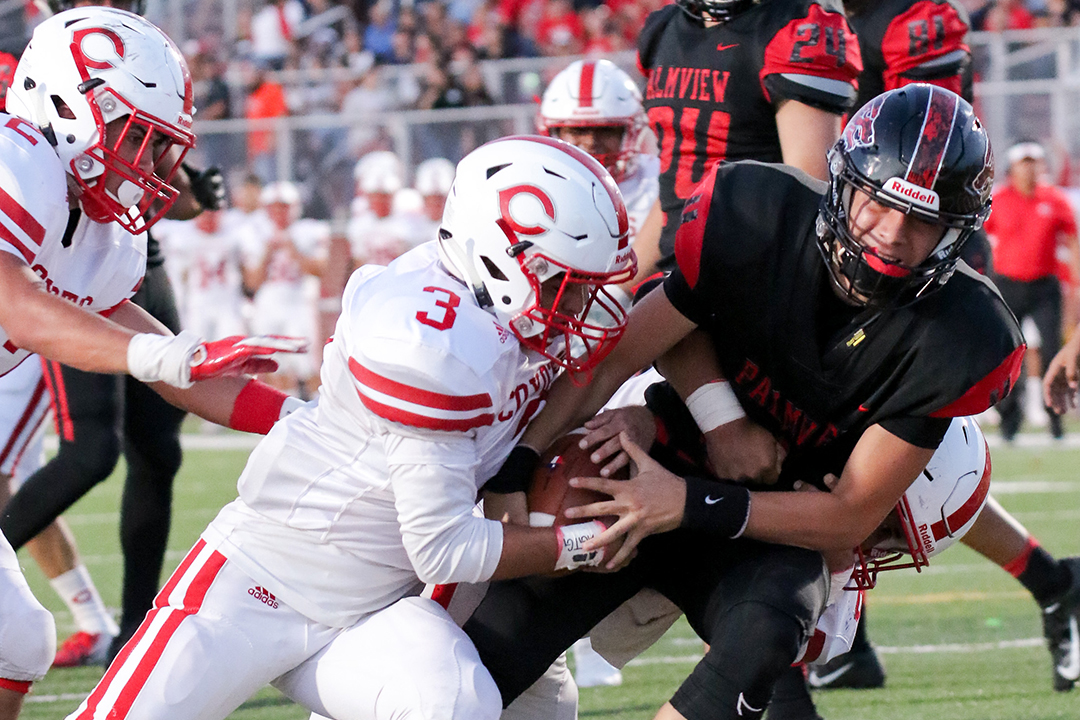 That however is about to change for two of those teams. That’s because as members of the 10 team District 16-5A-1, the Patriots and the Lobos are opening their district schedules this week.

While the Patriots played at PSJA Memorial last night, the Lobos, and the other five Big 7 teams, will be playing their Week Two games under the Friday night lights. Let’s take a look at four of those games.

Donna North at Mission Eagles
On paper, last week’s game between the Mission Veterans Patriots and the Mission Eagles looked like nothing more than a non-district game. However, as both teams, and every high school football fan in Mission, know all too well, the Battle of Conway, as this annual match-up between the two sister schools has come to be known, is much more than that. That’s because there are a whole year’s worth of bragging rights on the line and for the first time since the 2013 season, the bragging rights belong to the Eagles as they defeated the Patriots by a score of 24-12.

Now that the Eagles have gotten the Mission Veterans monkey off their back, they will be looking to go 2-0 tonight as they host the Donna North Chiefs. Winners of only four games total since the 2014 season, the Chiefs are coming off a 58-6 loss to their sister school, the Donna High Redskins.

Under third year head coach Koy Detmer, the Eagles have yet to post a .500 or better record. Will this be the season that the Detmer led Eagles will post a winning record and possibly even qualify for the playoffs? Only time will tell. But barring a huge upset loss to the Chiefs tonight, the Eagles will be off to the best start they’ve ever had under Coach Detmer at 2-0.

Sharyland Rattlers at McAllen Memorial Mustangs
Of the three Big 7 teams that won their Week One game, the Sharyland Rattlers are the only team to do so against a non-Big 7 opponent. That’s because they defeated the Brownsville Pace Vikings in overtime, by a score of 20-17.

In that game, senior quarterback Edgar Longoria completed 10 of 24 pass attempts for 80 yards, with one touchdown and two interceptions for the Rattlers. Fellow senior quarterback Oscar Valdez completed four of nine pass attempts for 22 yards, with no touchdowns and no interceptions. Senior wide receiver Ruben Davila was the top pass catcher on the night for the Rattlers with six receptions for 46 yards and one touchdown.

Tonight the Rattlers will be taking a short bus ride to McAllen’s Veterans Memorial Stadium where they will be taking on 6A powerhouse, the McAllen Memorial Mustangs. The Mustangs, who have gone undefeated against their District 30-6A opponents the past five seasons, opened their 2018 campaign last week with a 49-28 win over the Brownsville Hanna Eagles.

After qualifying for the playoffs three years in a row, the 2017 Lobos not only fell short of achieving that goal, but they failed to win a single district game. Palmview head football coach Mage Requenez attributed his team’s winless district record to a failure to execute and too many turnovers.

As for the Rattlers, they’re coming off a 32-31 Week One loss to the Roma Gladiators. Unlike the Lobos, the 2017 Rattlers were in the thick of the playoff race all season long. They actually opened their District 31-5A schedule with four straight wins only to drop their final four games and miss out on the playoffs.

Roma Gladiators at La Joya Coyotes
The Coyotes’ 2018 season didn’t exactly start off the way they had planned as the Palmview Lobos took the opening kick-off of their season-opener and ran it all the way back for a touchdown. Once the shock of that play wore off however, the Coyotes got down to business and with the help of junior running back Eddie Villarreal, who scored three touchdowns on the night, they went on to defeat the Lobos by a score of 39-19.

Slow starts are nothing new to the Coyotes. Just last season, they lost their first three District 30-6A games and seemed destined to miss out on the playoffs. That was when they strung three wins together by defeating the Juarez-Lincoln Huskies (24-10), the Nikki Rowe Warriors (17-14) and the Palmview Lobos (49-14) to earn their first playoff berth under second-year Coach Rueben Farias.

If the Coyotes are going to continue their winning ways tonight, they will have to do so against the 1-0 Roma Gladiators who defeated Rio Grande City last week by a score of 32-31. The Gladiators are coming off a disappointing season in which they posted a 1-7 District 31-5A record and were 1-9 overall.