Unsure about the feasibility of giving raises and increasing benefits for the Mission Police and Fire Departments, the mayor, city manager and city council held a public workshop on Tuesday.

The workshop drew several off-duty firefighters from the City of Mission. While firefighter and police cadets make the same salary annually, when looking at other comparable positions firefighters are making less in Mission than those in the police department. 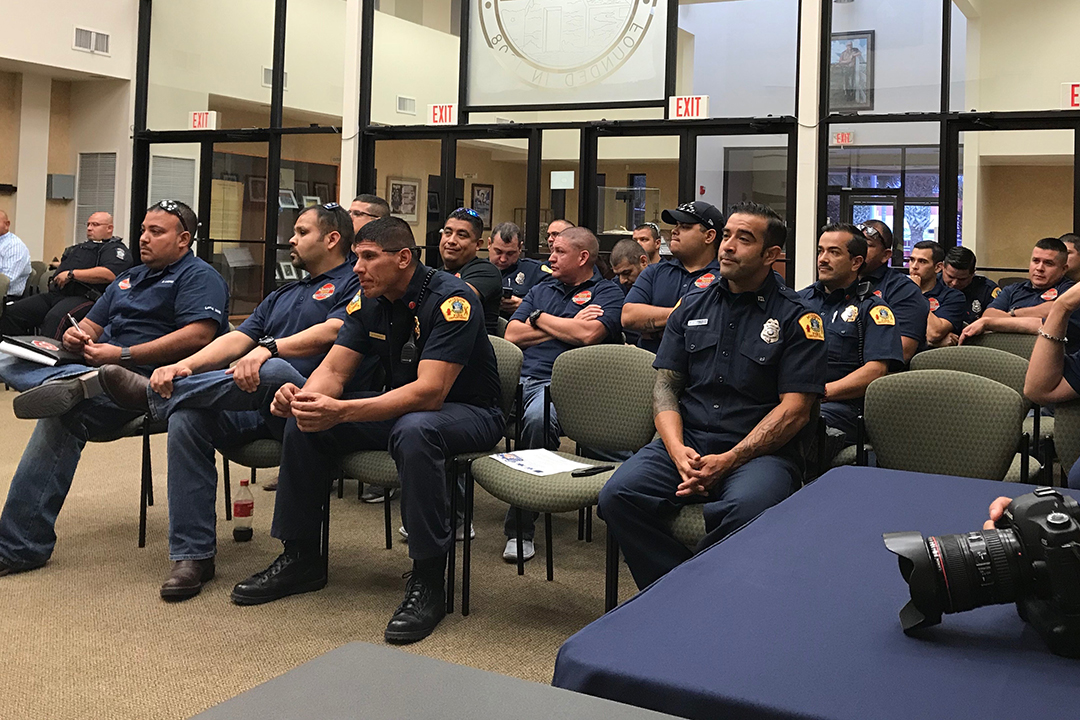 Council members Norie Gonzalez Garza and Gus Martinez were under the impression that the workshop was being held in order to discuss wage increases for the two departments, particularly the fire department. City Manager Martin Garza said they prepared for the workshop to be about where the city is at currently with personnel, staffing, pay, benefits and incentives offered compared to other cities similar in size to Mission.

“It&rsquo;s informative to know where we stand, but also I&rsquo;d like to know a little bit more about what can we do for our civil service,&rdquo; Martinez said. “We know how the civil service operates, a refresher would be great, but more pressing is certain areas in pay.&rdquo;

Martinez said they should discuss whether or not the money is able to be found for raises.

“It needs to be expressed to the public that our civil servants are protectors of our community,&rdquo; Martinez said. “They need to be duly compensated for their hard work.&rdquo;
Gonzalez Garza echoed Martinez&rsquo;s opinion on potentially increasing wages for the FD. She said that at previous budget workshops, council addressed all issues except for civil service salaries and wages.

“I&rsquo;ve seen the comparisons for our city and comparable cities, and we&rsquo;re lacking,&rdquo; Gonzalez Garza said. “I think we need to step it up and get competitive with the other cities. The fire department has received an increase in three years.&rdquo;

Council member Jessica Ortega-Ochoa walked into the workshop a few minutes late, and Ruben Plata was not present. When the council members were discussing the potential salary and benefits increases, Mayor Armando O&rsquo;ca&ntilde;a asked Ortega-Ochoa for her opinion.

“I&rsquo;m glad that Mr. Martinez wanted this, I think it&rsquo;s a long time coming,&rdquo; Ortega-Ochoa said. “I really appreciate all the hard work both the police and fire do for us, and we really need to keep them in mind, and their needs and wants, that way we can meet in the middle.&rdquo;

It appeared the off-duty firefighters present believed the mayor and council were going to confirm some form of wage increase or benefit changes as well. Robert Lopez, a Lieutenant with the Mission Fire Department and the president of their union, spoke on their behalf during the workshop.

“It seems overwhelming, it&rsquo;s just many years of being put on the backburner,&rdquo; Lopez said. “We understand that we&rsquo;re not going to get everything. We&rsquo;re not here for that. If we could just chip away at a few items, that&rsquo;s progress.&rdquo;

“I know when I asked for the minimum wage to be raised from $8.50 to $15, I was told fiscally it was not possible, I was told by staff and by council,&rdquo; O&rsquo;ca&ntilde;a responded. “So I know anything that has to do with salaries and so forth may not be fiscally responsible for us to do right now.&rdquo;

According to Lopez, the fire department is asking to close the separation gaps of salaries and benefits between not only the fire and police departments in Mission, but other municipalities.

The Mission Fire Department is asking for a raise in their education pay and longevity which would cost about $18,461, auxiliary vehicles totalling at $164,004, yearly cancer exams and doctors visits for $23.025 and Texas Municipal Retirement System estimates from 6 percent to 7 percent (resulting in an increase of $688,447).

Because about 60 percent of calls to the FD are for Emergency Medical Services, they also hope to make all firefighters EMT (Emergency Medical Technician) certified, which would cost approximately $46,000.

All these requests are in addition to salary increases, which would result in an increased cost of $244,781. Ortega-Ochoa pointed out that with the raises, the Mission department would then be making more than other municipalities.

“Four out of those six cities also have collective bargaining contracts,&rdquo; Lopez replied. “It is already written out that each year they will be getting increases. The numbers now state this fiscal year, if this were to pass, next year we&rsquo;d be the same while they&rsquo;re going to increase. Their base salaries will still be increasing due to their contracts.&rdquo;

Garza couldn&rsquo;t confirm that, because he did not have access to their collective bargaining contracts.

Mayor O&rsquo;ca&ntilde;a then brought up how in the initial budget workshops, they couldn&rsquo;t find the funds to raise the minimum wage for all city employees to $15 immediately, so he did not know how they were going to find money for these salary increases.

O&rsquo;ca&ntilde;a also noted that the city has a ten year plan in place, and that by the end of it all the requests from the firefighters union will be met. Ortega-Ochoa said that at previous budget workshops, they couldn&rsquo;t find enough funds for pay increases before, and if she saw a plan where that was laid out, “of course&rdquo; the FD should be considered.

Martinez and Gonzalez Garza pointed out that with the increase in utility fees being moved to Oct. 1 instead of Feb., the city will then have an estimated $800,000 of additional income. They would like that to go toward some of the fire department&rsquo;s requests.

“I think that we can find the $244,000,&rdquo; Gonzalez Garza said. “And again, if it&rsquo;s not all there, I would be okay with dipping into the general fund for this year.&rdquo;
Martinez and Gonzalez Garza both agreed that they wanted to find funds in the budget somewhere for the police and fire departments.

“If we do this, and get them [the FD] into some kind of parity with the PD, we really won&rsquo;t have to address this for another two, three years,&rdquo; Martinez said, adding that it should be brought up as an agenda item at the next city council meeting.

When that was suggested, O&rsquo;ca&ntilde;a brought up the minimum wage issue again.

“Would you also entertain an agenda item to move the minimum wage from $9.50 to $10.50?&rdquo; O&rsquo;ca&ntilde;a asked.
The preliminary budget for the City of Mission will be finalized on Monday, Sept. 10, so Martinez and Gonzalez Garza wanted to meet before then to find a solution to potentially raising wages for the fire department before then.

O&rsquo;ca&ntilde;a and Garza are going out of town for work on Friday, and the mayor said that a meeting at 4:30 p.m. on Monday (one hour before the city council meeting) wouldn&rsquo;t work because he and the city council had decided sessions or workshops held at 4:30 p.m. before official council meetings should only be about “future issues.&rdquo;

O&rsquo;ca&ntilde;a agreed that the civil servants are necessary to the city, but wanted to discuss this at the next city council meeting. It was decided that each council member would meet individually with city staff to get more information on possibilities, and it would be presented again to the public at the next meeting on Monday, Sept. 10.