Before the Diamondbacks and Juarez-Lincoln Huskies met Friday night at Richard Thompson Stadium, first year Pioneer Head Coach Tom Lee knew it was going to be a dogfight.

After 48 minutes of play between the two teams, Lee was proved right as the Diamondbacks and Huskies fought to the last seconds of their Week 2 non-district matchup with Pioneer prevailing 31-29.

To get there, the Diamondbacks had to overcome a 10-point halftime deficit and seven total turnovers, including five in the first half, to pick up their first win of 2018 and Lee’s first as a head coach in 10 years. 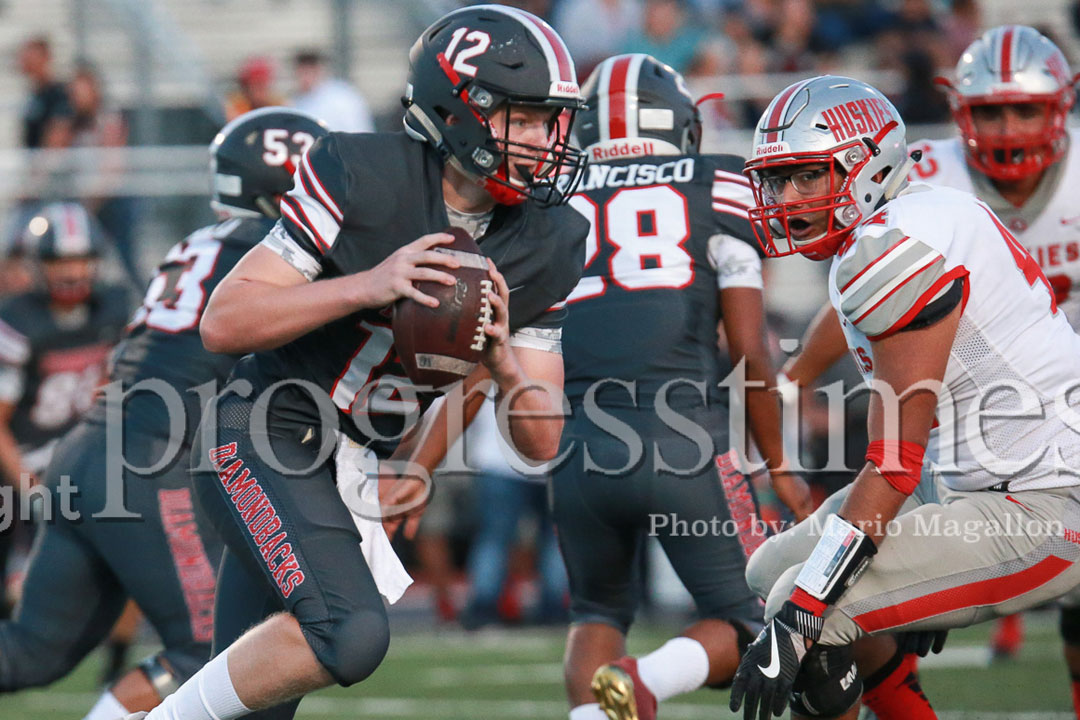 “It would have been really easy for our kids to go in at halftime with five turnovers and just about every that can go wrong in a game, go wrong,” Lee said. “That’s the resiliency of our kids, our coaching staff, and we didn’t quit. We did a hell of a job second half.”

In the second half, the Diamondback defense pitched a shutout after allowing 29 points in the first two quarters. Juarez-Lincoln running back Albert Martinez accounted for all four Husky touchdowns, with three on the ground and one through the air. But when it mattered most, the Pioneer defense showed up as they forced four Juarez-Lincoln turnovers, including a game-sealing fumble recovery by defensive end Alonzo Ibarra with under a minute to play in the fourth quarter.

Ibarra credited an inspirational halftime speech from the coaching staff that motivated the Diamondbacks to shutout the Huskies in the second half.

“We made adjustments, we talked to each other and we became a team in there,” he said. “It’s the best thing to happen to us so far this season.”

Defensively for the Diamondbacks, Ibarra recovered two fumbles, outside linebacker Kyle Sullivan recovered one, and defensive back Marco Oviedo made a spectacular second half interception.

Despite the team’s seven turnovers on offense, the playmaking ability of Pioneer’s quarterbacks and receiving corps was too much for the Husky defense to handle. Sophomore Eddie Lee Marburger and senior Jacob Rosales combined to throw five touchdown passes to Diego Benavides (2 TD), Diego Perez (2 TD) and Lavar Lindo (1 TD). The biggest momentum swing and score of the game came on a 56-yard touchdown pass from Marburger to Lindo on a 4th-and-1 early in the third quarter with Pioneer down 10, which closed the Juarez-Lincoln lead to 29-25.

”Words can’t explain it,” Marburger said after the victory, his first as a starter. “It’s just listening to coach all week. God’s going to put you in situations to make plays.”

While the aerial attack was working for the Diamondbacks, the ground game was stagnant all night. That’s when Rosales moved over to play running back with Marburger at quarterback, giving Pioneer two weapons in their backfield.

“We got two really good athletes right there and I think you saw that tonight,” Lee said. “We’re going to continue to do what we do with those guys. I think you saw a good combination of what we can do.”

Rosales said he’d do whatever it takes for the Pioneer Diamondbacks to be successful and knows his teammates have his back.

The Pioneer Diamondbacks improve to 1-1 on the season and are now focused on next week’s Thursday night matchup against the cross-town Mission Eagles (2-0), Lee’s alma mater where he also served as head football coach for six seasons.

“That’s my hometown,” Lee said. “I played football there 30 years ago, we’re actually having our 30 year reunion this year, but we’re going to treat is as another game. It’s a non-district game, and an opportunity for us to get better. I think it’s going to be a good game and a good opportunity for our city to have that rivalry.”