Week Two of Valley high school football was a good one for the seven teams from the Mission, Sharyland and La Joya school districts. That’s because the Big 7 teams went 5-2 on the week. And with one of the games being a head-to-head match-up between two Big 7 teams, it was a given that one of those teams would lose. In other words, 6-1 was the best possible record that the seven teams could post last week, so 5-2 was just one loss worse than the best possible record. And with that one loss being the 5A Sharyland Rattlers’ overtime loss to the 6A powerhouse McAllen Memorial Mustangs, the Big 7 really couldn’t have had a much better week than it did.

Of those five wins, the biggest were the Veterans Memorial Patriots’ and the Palmview Lobos’ District 16-5A-1 season-opening wins. That’s right in only Week Two, the Patriots and the Lobos are already playing district games. That’s because as a result of the University Interscholastic League’s (UIL’s) most recent realignment, the Patriots and the Lobos are now members of the newly formed District 16-5A-1, a ten team district. And as a result, they each have nine district opponents which results in a 10 game schedule made up of one non-district game and nine district games. 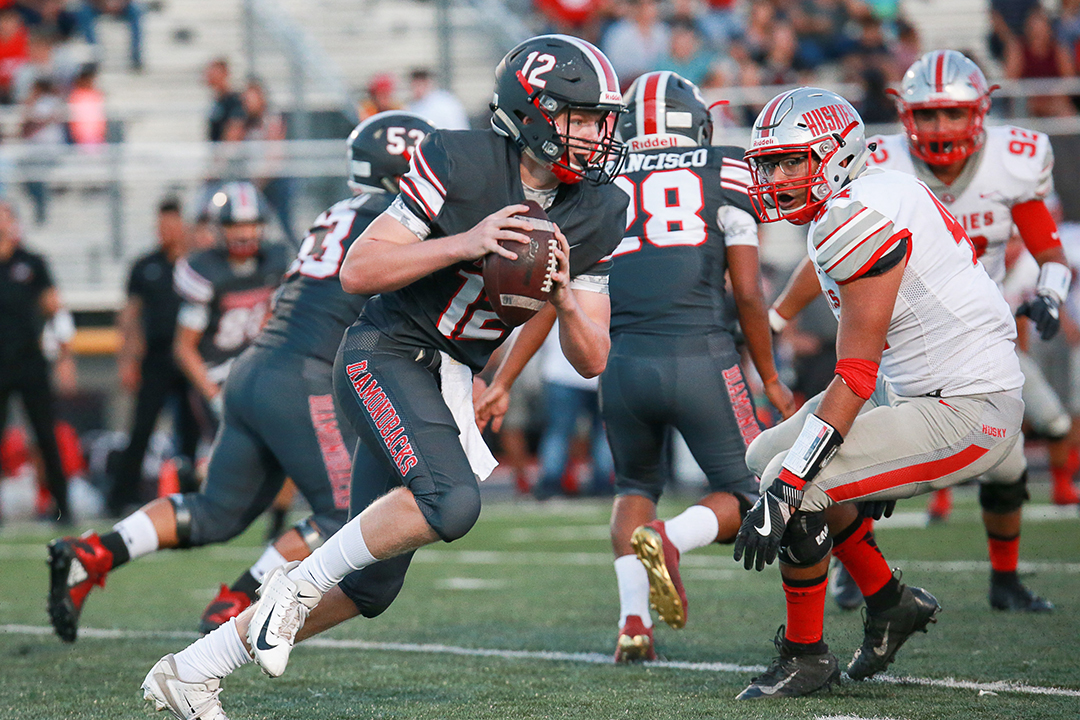 With three of the Big 7 teams having played their Week Three games last night, the Pioneer Diamondbacks at the Mission Eagles and the Juarez-Lincoln Huskies vs the Edinburg Bobcats, there are only three games featuring Big 7 teams on tonight’s schedule. And with the La Joya Coyotes at Sharyland Rattlers game being our Game of the Week, which is being previewed separately, let’s take a look at the other two Big 7 games being played under the Friday night lights.

Should any of tonight’s games be rescheduled, relocated or cancelled due to inclement weather, we will post updates on our Progress Times and Sharyland Times Facebook pages.

Patriots’ senior quarterback Landry Gilpin played a major role in that victory. With 303 passing yards, a .684 completion percentage, three touchdown passes and no interceptions, Gilpin’s passer rating was a near perfect 150.8 against the Wolverines. As if that wasn’t impressive enough, Gilpin carried the ball eight times for 139 yards and three additional touchdowns. In total, Gilpin accounted for 442 yards and six touchdowns on the night.

Tonight, the Gilpin-led Patriots will be hosting the 2-0 Brownsville Veterans Chargers in a District 16-5A-1 matchup between two of last year’s district champions; the Patriots in 31-5A and the Chargers in 32-5A. The Chargers, who are coming off a 32-12 win over Brownsville Lopez, went two rounds deep into the playoffs last year. They defeated Laredo Nixon by a score of 34-10 in the bi-district round but fell to Corpus Christi Veterans Memorial in the Area round by a score of 55-41.

Even though it is early in the season, tonight’s game will almost certainly go a long way towards determining the eventual District 16-5A-1 championship. Whichever team emerges victorious, will not only have a one game lead over the other in the standings, but will also have the advantage if and when it comes down to any head-to-head tie-breakers.

This should be a very competitive game between two teams that are not only brand new district rivals, but are two of the top varsity teams in the Valley.

Brownsville Porter Cowboys at Palmview Lobos
Like the Patriots, the Palmview Lobos shook off a Week One loss to a sister school and bounced back in Week Two with a District 16-5A-1 victory; the loss coming at the hands of the La Joya Coyotes by a score of 39-19 and the win being over the Rio Grande City Rattlers by a score of 37-29.

Coming off last year’s winless District 30-6A season, the Lobos have certainly gotten their inaugural 16-5A-1 season off to a much better start. However, if they are going to continue their winning ways and go 2-0 in district play, it will have to be against the 1-1 Brownsville Porter Cowboys tonight at La Joya ISD Pack Stadium.

So while tonight’s matchup may not have eventual district championship ramifications like the Patriots/Chargers game does, both teams will be going all-out to chalk up a district win in hopes of remaining in playoff contention as deep into the season as possible.

This game represents a very good opportunity for the Lobos to go 2-0 in district play. After posting a 0-6 district record last season that would not only be quite a turnaround, but it could be a sign of good things to come.