After losing two of his siblings to a deadly disease that affects one in three people in the Rio Grande Valley, a Mission resident is making sure the next generation will be able to live healthier lifestyles and lower the risk of diabetes.

David Ceron, 42, is the author of “the Adventures of Exo and Cy,” a children’s book that will be available in an e-book next month. The story follows a young boy, Exo, and his dog Cy as they battle the villains of their hometown of “O.B. City” who are intent on making life unhealthy for residents of the city. 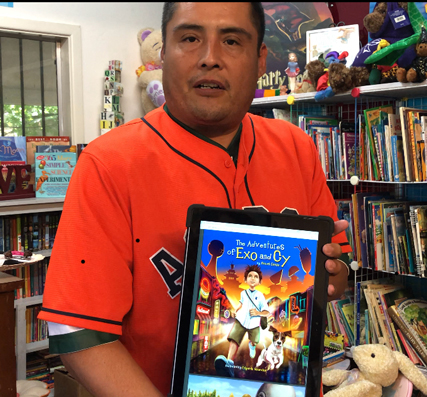 “This is the first in a series of five planned books that all interactive in raising health awareness regarding diabetes,&rdquo; Ceron said. “It&rsquo;s really targeted toward kids from kinder through 4th grade but the whole family can enjoy it.&rdquo;

The first book has Exo and Cy facing a bully named Chip and his dog, Nacho. Our heroes chase the villains across the city and complete all the obstacles Chip puts in their way, Ceron said. Each obstacle is an exercise that readers can do along with the characters of the book.

“So when kids read the book, they&rsquo;ll have to get up and do these ‘exocyses,&rsquo;&rdquo; Ceron said. “That way, it&rsquo;ll be as if they&rsquo;ve done a small workout as they read the book that the entire family can follow along.&rdquo;

The idea for the book came four years ago following the death of Ceron&rsquo;s sister, Mary, 60, which occurred one year after the death of his brother, Jose, 59. Both of them died from diabetes, which runs in the family according to Ceron.

“My mom is diabetic and my five older siblings also have diabetes,&rdquo; Ceron said adding that one of his sisters has undergone multiple amputations and is legally blind because of diabetes.

According to Texas Health and Human Services website, 30 million Americans live with diabetes and 2.8 million people in Texas have been diagnosed with it. The rate of diabetes in the Rio Grande Valley is 20 percent higher than for Texas as a whole, the website states.

“I talked to [Jose and Mary] daily and was so close to them. It was hard for the family when they passed away, we&rsquo;ve seen as a family what diabetes can do to us,&rdquo; Ceron said of the disease.

After finding comfort in prayer following the death of Mary, Ceron said the idea of writing a children&rsquo;s book series that features several puns and teaches readers about the importance of exercising and maintaining a healthy diet came to him.

Thus, “The Adventures of Exo and Cy&rdquo; was born.

“We live in a society where parents are burying their diabetic children like my mom did because we live an unhealthy lifestyle,&rdquo; Ceron said. “We live in an area where diabetes, obesity and other health issues are rampant and we suffer from it.&rdquo;

The Diagnosis
Last year, after he had finished writing the book, Ceron was diagnosed with diabetes.

Even though diabetes runs in the family, the diagnosis shocked him, he said.

“I was pretty upset,&rdquo; Ceron recalled. “I prayed ‘Lord, why did you want me to write this book to spread this message only to now have diabetes?&rsquo; I didn&rsquo;t know how to take that. It was a challenge that sent me to a depression that lasted two weeks.&rdquo;

Ultimately, Ceron overcame his depression at the realization that his diagnosis did not diminish the message he is imparting to readers in “The Adventures of Exo and Cy.&rdquo;

“The diagnosis just made it much more personal,&rdquo; Ceron reflected. “As a diabetic I could now relate to people struggling with their diagnosis. People always say ‘You have to deal with diabetes&rsquo;. That&rsquo;s not true, Diabetes has to deal with me.&rdquo;

Ceron now maintains an active lifestyle where he walks daily, plays tennis and has cut off sugary drinks and candy from his diet to combat his diabetes.

Ceron says he plans to create a site to sell his book as a digital download next month. He is also partnering with the Rio Grande Valley Diabetes Association and South Texas Literacy Coalition to create physical copies of the book that can be printed and distributed across the Valley.

Ceron is also planning a sequel titled “The Adventures of Aero and Bix,&rdquo; in which a girl, Aero, and her cat, Bix, combat candy-themed villains in O.B. City.

The plan is to have Exo and Aero team up later in the series to combat the city&rsquo;s crooked mayor, “Diane Betes.&rdquo;

“People at a young age with diabetes can still turn things around,&rdquo; Ceron said. “If we can change their mindset when they&rsquo;re little, they won&rsquo;t battle it so much when they are older.&rdquo;