The Alton local non-profit La Union del Pueblo Entero has moved to a new location that will benefit the community.
The city and LUPE held a red-ribbon cutting ceremony last Friday, Sept. 14, to commemorate their new office and the relationship between Alton and LUPE.

The new Alton LUPE location is housed in the offices of the Alton Regional Training Center at 416 S. Alton Blvd, a departure from the previous location which was housed inside two elementary school portables behind city hall. 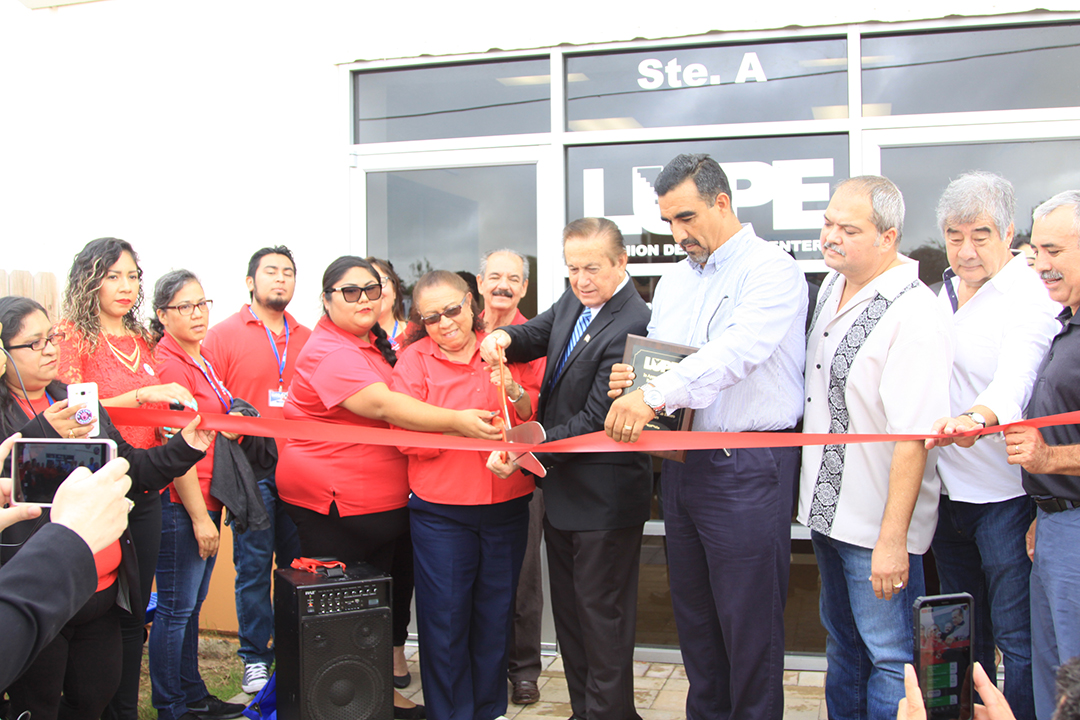 “We always knew the city would provide something better for us and now we’re here,” LUPE Office Manager Claudia Garcia said. “We’ve been in those portables since 2013 and it was crowded. We couldn’t provide all the services we normally can for our members at that location. Now we can literally stretch our arms out to the community.”

LUPE is an organization founded by activists Cesar Chavez and Dolores Huerta to support colonia residents. LUPE, which also has offices in Mercedes, San Juan and San Benito, provides services such as citizenship and English classes for members at a fee of $40 per year, or $20 for students according to Garcia.

At their new location, LUPE will have access to classrooms and office space available at the Alton Regional Center, this will provide better opportunities to LUPE members, Garcia said. Thanks to the space, LUPE will also be able to offer GED classes which their other locations provided.

“I’m from the area and know how important it is for people to feel comfortable regardless of their economic status,” she said. “Services will improve, we now have the full space to provide the full services.”

Among the attendees at the ceremony was Martha Sanchez, LUPE’s coordinator for their organizing team. Sanchez worked at the original Alton location when they were housed in a small office space near 5 mile and Mayberry Road before they moved to the Alton’s original city hall on the corner of Conway Avenue and 5 Mile Line in 2006.

They then moved to their previous site in 2013.

Sanchez took time to reflect on how LUPE has grown since them.

“In the beginning, when we started working with Alton it was a small city of 10,000 people and we started working on projects together,” Sanchez said, noting that the first time the two partnered up was during a Christmas toy drive in 2006. “LUPE wanted to be an asset to the city. We wanted them to know we were here to see the city grow and improve the services. We entered this partnership understanding that we needed each other. After that toy drive, they noticed we were an asset and wanted to be partners.”

Over time, LUPE witnessed the population of Alton grow to over 16,000 residents. LUPE has been helping several of those residents improving their lives either through teaching them English, teaching them about their basic rights and helping them attain citizenship. This is all with full support from the city, Sanchez said.

“We create citizens and provide services to residents in the colonias and Alton knows how much of an asset we are to the city, and that’s evident because of this building,” Sanchez said. “Our new location is a palace compared to where we used to be. There’s more space compared to the old building where we couldn’t even hold community meetings. Now we can offer more so the entire community can benefit.”

Alton Mayor Salvador Vela praised the work LUPE has been doing since they’ve been in the city.

“These people fight for the rights of others, they’re good for the area,” Vela said. “This space will benefit them. We work with them because it’s for the benefit of the community, to help them. This keeps the people anchored and provides incentives for people to become citizens; that’s what I want.”