In early August, she was selected as the Region One Elementary Teacher of the Year. Later in August Peña learned she was one of six finalists for Texas Teacher of the Year which is facilitated by the Texas Association of School Administrators (TASA). 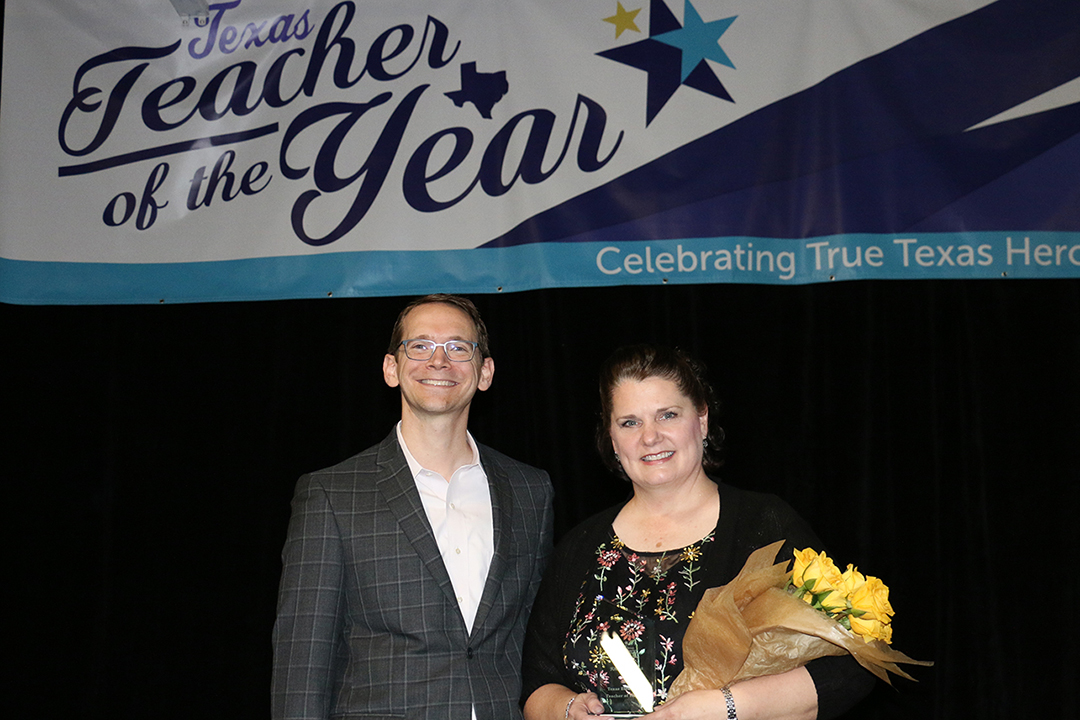 This makes Peña the top elementary school teacher in Texas for this year’s statewide contest.

Peña is a fifth grade math and science teacher at Bryan Elementary School. She has been at the campus for 25 years and has a total of 28 years in education.

She has been chosen as Bryan Elementary Teacher of the Year twice: 2018 and 2012. In 2017, she received the prestigious H-E-B Excellence in Education Lifetime Achievement Award.

In her Teacher of the Year application Peña said, “If I were chosen as the 2019 Texas Teacher of the Year, my message to other educators and the public would be, “Building Relationships Will Build Respect and Success,” she said. “Our students are our future. They deserve to have every ounce of our efforts to help guide them toward a productive life. By building a relationship with each of our students, we are also building the respect that they will have for us, for each other, and for themselves, and we are setting the path towards a successful life.”

“Words cannot really express just how proud of Ms. Peña we are in Mission CISD,” said Dr. Carol G. Perez, Mission CISD superintendent. “The tremendous heart and passion that she pours into her work each and every day is done with the sole focus of helping her students, not to bring attention to herself. So for Ms. Peña to earn this statewide award, it means so much more.”

“I congratulate Rhonda and Jeff on this achievement. Texas Teacher of the Year is the highest honor our state bestows upon its teachers,” said Kevin Brown, executive director of TASA. “They have distinguished themselves among thousands of outstanding, dedicated teachers across our state and nation have who have answered the call to serve others.”

The announcement was made at the Texas Teacher of the Year awards luncheon at the Bullock Texas State History Museum in Austin. Both state-level winners will receive a cash award and a commemorative trophy.

Also honored during the luncheon were the Regional Teachers of the Year and the finalists for Texas Teacher of the Year: Karyn Ard, Troup ISD; Andrea Greimel, San Antonio ISD; Megan Holden, Lake Travis ISD; and Joe Parthemore, Grapevine-Colleyville ISD.

The Texas Teacher of the Year program has honored excellence in classroom education since 1969 and continues to annually recognize and reward teachers who have demonstrated outstanding leadership and excellence in teaching.

The quality of Mission CISD teachers and their applications have caught the eye of the state judges and Region One judges several times over the years. In 2008 Iris Hines, who worked at Roosevelt Alternative School was a state finalist.

TASA is the professional association for Texas school administrators, providing professional learning and networking opportunities, legislative advocacy, and targeted communications to support the work of superintendents and other school leaders. TASA’s mission is to promote, provide and develop leaders who create and sustain student-centered schools and develop future-ready students.